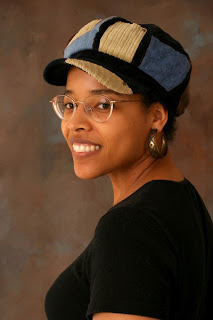 A native of Detroit, Michigan; Nicole Tadgell moved frequently growing up. She studied studio art at Wheaton College in Norton, Massachusetts; and today has more than fifteen books and numerous educational pieces published. You can keep up with her and her projects on her blog, Studio NT.

I thought it was so interesting what you wrote on your blog about the Horn Book review of your recent book, Lucky Beans, written by Becky Birtha (Albert Whitman, 2010).

You said that the reviewer, Susan Dove Lempke, was someone you had read years ago, that her Horn Book article, “The Faces in the Picture Books,” is probably what sparked your career as a children’s book illustrator. Can you tell us a little about that?

It took me a long time to develop and accept a black identity because I grew up in mostly white neighborhoods. I did not want to be defined by my race, but by my interests and who I was as a person.

Black history contains a lot of disturbing, horrifying, and sad things. To belong to that history can be uncomfortable, especially to a shy and sensitive child. 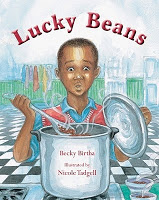 Can you tell us a little more about how your discovery after college of the scarcity of children’s books featuring black children and black young people might have also influenced your decision to go into children’s book art?

I was inspired most by the work of Trina Schart Hyman, Wendy Pini, E.B. Lewis and Jerry Pinkney. I was studying current picture books in bookstores and libraries to find which publishing houses would be more receptive to my work, and I noticed that most of the stories that featured main characters of color were about heavy subjects such as slavery, civil rights, racism and poverty.

Very few of them were just about kids having fun, such as Jerdine Nolan‘s Raising Dragons (Harcourt, 1998). 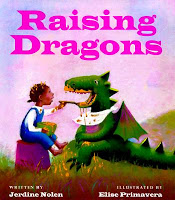 I don’t recall seeing any fantastical or sci-fi ones, which I’d love to do. There are some now, of course, but I didn’t see any at all back then.

Many of your books do feature African-American characters and stories about black families and communities. Is this your choice? Or is it that publishers approach you primarily for these projects?

There’s the phrase “write what you know.” If you’re immersed in your community and a strong ethnic identity, and feel comfortable doing so, go for it.

Artists are chosen based on the work they’ve already done. If you’ve got a portfolio filled with black children, that’s the kind of work you’re going to get.

I do feel that I most often get approached to illustrate books featuring children of color. This is what I want to do. All artists evolve, and I can see my work going in different directions. I’d love to do a completely fantastical story, for example. Or something zany and hilarious.

Can you tell us a little bit about any challenges you faced doing the pictures for Lucky Beans, written by Becky Birtha (Albert Whitman, 2010), and what were the special treats in illustrating it?

Although I’m passionate about illustrating picture books without social issues, I still do some aspects of them. For example, in Lucky Beans, the main character needs to ask the store owner if he’s excluded from entering the contest because he’s black. I felt that the heart of the book was about Marshall’s efforts to help his family, not confronting racism. Besides, the chance to work on a book that takes place in the 1930s was so interesting!

As for special treats, I love subplots, and I know these characters had a life before and after we see them in the book, so I worked on showing an intimacy with Dad and his little girl. You can see them interacting in the background in many of the pages. 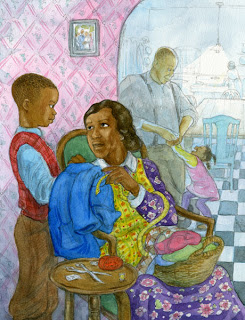 How do you approach each new illustration assignment? What are your first steps? Can you describe a little about your “make-ready” process at the beginning of each book? (You’ve been quoted as saying, “Sometimes I pretend I’m the kid in the book and do the things they do in the story to really get the feel for each book.”). Do you gather lots of visual reference materials before tackling each story, and if so, how do you go about collecting your pictorial reference? 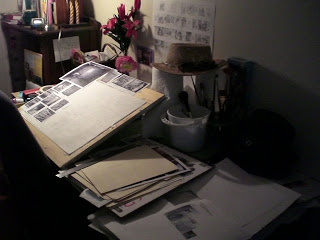 As an artist, I’m always pushing myself to grow, to progress, to get better. I kept wanting my artwork to be brighter and have richer color, and I wanted be able to render buildings and architecture better. So I read up on perspective, used lots of reference photos, and did a lot of drawings with rulers for all those vanishing points!

The author had said that she pictured Marshall’s town as being something like the Homewood area of Pittsburgh. Worcester, Massachusetts; is also an industrial city, and the Historical Museum is walking distance from where I work! The wonderful folks there knew just what to do when I asked for photos of street scenes with storefronts–particularly furniture stores. It was so fun to walk around downtown Worcester with a photo taken in the 1930s and look around to see how it’s changed–and how it’s stayed the same. 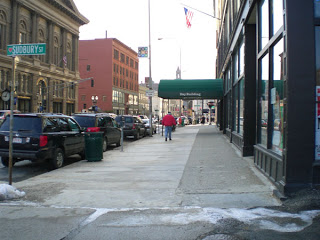 I love old things, so it was a lot of fun to look at antique sewing machines, clothing, and kitchens from that time period. 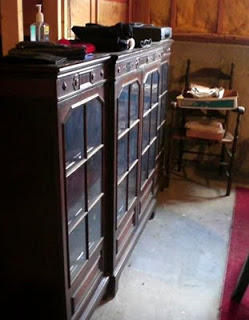 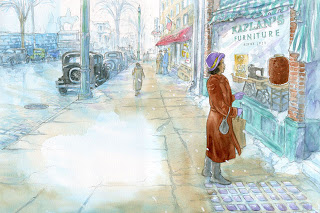 My father grew up in a 1920s bungalow in Detroit, so I used photos and memories of the house there, and found reference photos for the more specific details. I imagined a Depression-era family would have a hodgepodge of things inside; mismatched chairs, for example. 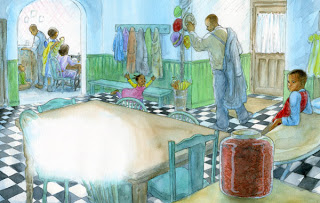 Can you talk a little about your individual process? How do you create your illustrated characters? Do you do lots of sketches before you start on a series of illustrations? Do you have a certain way of getting to know your characters–how they’ll look and behave and who they’ll be in a story? Do you do thumbnails? Do you draw and trace on a light box, then paint, or do you scan your sketch into a computer and paint digitally?

For this book, I bought several bags of beans to use as references. Navy beans, pinto beans and kidney beans. I ate beans (which I love, although they do have a reputation, don’t they?!).

Although it was more likely navy beans would have been eaten in those days, kidney beans look much more bean-like with their rich color and shape. Navy beans aren’t really navy – they are small, white ovals.

My process is pretty much three stages: thumbnails, tight pencils, final color. Each stage takes roughly three months. The first stage is often my favorite, because the book feels like it can go anywhere in terms of composition and layout. I do character studies and research.

The second stage is harder because I have to figure out how to make it work – details like perspective, getting everything to fit and work together. Exactly how does the sewing machine look at this angle? Things like that.

The third stage is after everything is approved. I print the drawings onto watercolor paper after having scanned them, and paint from there. That way, if I make a mistake painting, I only need to reprint the drawing rather than redraw and repaint. If I’ve made a mistake in the drawing, then I’m in real trouble! 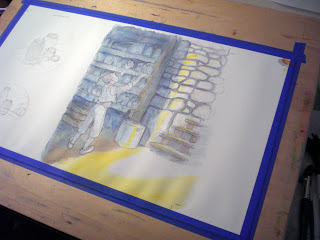 Can you discuss other favorites from among your own books?

In A Day with Daddy, written by Nikki Grimes (2004), I knew I wanted to show a very young father with his son. I wanted to paint a Daddy with deadlocks, and my brother had them, so I used him as a model. That was fun! We got together, and I took photos of him. 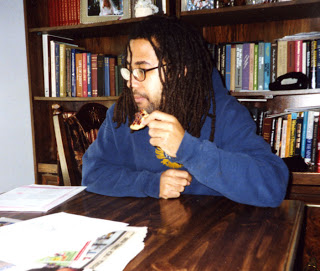 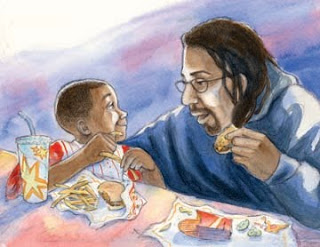 Your perspective on the creative process has been described as unique. That certainly sounds fun. Can you tell us more? Is feeling creative as big an issue for an illustrator as it is for a writer?

Probably! I’ve been working on writing and illustrating, so the perspective is probably different, but I think creativity can be elusive sometimes! It doesn’t turn on and off like a faucet, but it’s easier to access when you do it daily. You kind of have to get out of your own way.

You’ve said that, as a child, you loved illustrating stories. And you’re also a big reader. Are you also a writer? Can we look forward to seeing a book you’ve both written and illustrated?

I hope so! I have several stories I’m working on. I keep changing my mind on what should happen, how it should happen, what can make it better. Constant revising, I guess.

I’m very much enjoying the process of exploring creativity in this way – by being able to control both words and pictures. Learning about storytelling. After all, that’s what it’s all about.

Mark Mitchell, who interviewed Nicole for Cynsations, is an author-illustrator living in Austin Texas. He teaches classes in watercolor illustration at the Art School of the Austin Museum of Art and also runs an ongoing online course on drawing and painting for children’s books.

In addition, he hosts the How to be a Children’s Book Illustrator blog.

Read a Cynsations interview with Mark.