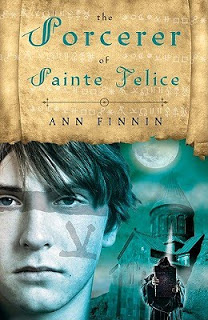 Ann Finnin is the first-time YA author of The Sorcerer of Sainte Felice (Flux, 2010). From the promotional copy:

“I was only an apprentice. I swear it. By all the angels in Heaven.”

Condemned to death by the Holy Office for sorcery, fifteen-year-old Michael de Lorraine is rescued from the flames by Abbot Francis and granted refuge at Sainte Felice, a Benedictine monastery in fifteenth-century France.

Michael learns that this strange and wonderful place, famous for its healing wine, harbors renegade monk-sorcerers, enchanted gargoyles, and a closely guarded secret that could spell violent death for the Abbot.

As the church intensifies its cruel pursuit of Michael, Abbot Francis and the wizard monks find themselves in grave danger.

Michael will do anything to protect his mentor, but are his own magical powers great enough to save the monastery from the merciless, bloodthirsty Inquisition?

Mine was a long, long journey – over thirty years. And while my debut didn’t seem inevitable, I have to admit there was a certain “well, it’s about darned time” feel to it.

The first draft of this book was originally completed in 1978. Obviously, it went through many revisions since then. The version that actually sold was completed in 1991. But the idea of the book, the characters, the setting and the basic storyline remained the same from one version to the next.

In the meantime, I completed several other novels in a variety of different genres, from adult fantasy to romance, gradually honing my skills, so when I drafted the final version of this book, I was able to craft a much better story than I did in the original version (I still have it, and I cringe to read it).

None of the other books have sold–yet. I have had some serious nibbles over the years, and once you are published in one genre, it is easier to publish in another. So, there is hope that some of my other stories will appear in print before too long.

Sometimes a story has to wait for the right time for an editor to want to publish it. If you continue to keep improving it and sending it out, eventually, it will find its home.

As for keeping the faith, I never really lost it. When I was a teenager, my mother gave me a book that still sits on my shelf. The title is: A Writer is Someone Who Writes.

I am a writer. I write. I love to write. I can’t go for too many months without writing something, an article, a short story, a novel, anything. I’ve published articles and a short story or two over the years. But even if I hadn’t, I would still write. Because I’m a writer. I can’t not write.

As a historical fiction writer, what drew you first-character, concept, or historical period? How did you go about building your world and integrating it into the story? What were the challenges? Where did you turn for inspiration or support?

I chose my time and place (France, 1480) with considerable care. There were things that I wanted to have happen that couldn’t have happened if the time period were fifty years earlier or fifty years later.

My main character, 15-year-old Michael de Lorraine, is a child of his time. He would not have had the conflicts and the character arc that he has if he had been born a century earlier or later.

The biggest challenge in writing a story set in another time is liberating your mindset from the assumptions of the modern era that we think are so self-evident but which didn’t exist in other centuries. This includes allowing sympathetic characters to have attitudes about sex, gender, race, religion or social class that we find repulsive.

This isn’t easy to do, and the inability to do it convincingly results in “historical” fiction which is simply a contemporary story featuring contemporary conflicts in which all the characters wear the costumes of another era.

When I was active in Renaissance Faires and other historical reenactment groups, there were always the people who dressed in elaborate and historically accurate costumes sitting in a pavilion in which all modern items were carefully expunged, chatting about their computers.

Part of this was because it was difficult to know enough about what a sixteenth century noblewoman would chat about to be able to carry on a convincing conversation without a script. But it was also because few people, even reenactors, were willing to voice politically incorrect opinions, even if such opinions were as much a part of their chosen historical period as their clothing and accessories.

What has to happen is that the author has to peel away the generalities of the historical era and get to the basic humanity of the characters.

The hero of a story set in nineteenth century England might genuinely think that a woman’s proper place in the kitchen, but would treat the women he encounters with kindness and consideration whereas the villain in the same story would have the same attitude towards women but would treat the individual women of his acquaintance with harshness and disrespect. In this case, the attitude towards a woman’s proper place is part of the historical era in which these two characters grow up, but the treatment of this woman or that would distinguish the hero from the villain.