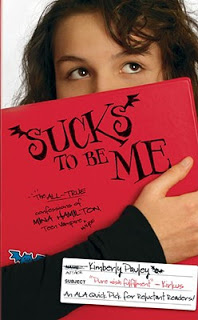 When I wrote my first book, Sucks to Be Me: The All-True Confessions of Mina Hamilton, Teen Vampire (Maybe) (Mirrorstone, 2008, 2009), I had ideas for what the next two books (should I get to write them, of course) would be like.

But a lot of things changed after my publisher decided to take a chance on me, including the age of the main character, which completely changed my plan for the second book. And, as a first-timer with a smaller publisher, I had no idea whether or not I was going to be actually asked to write a second or third book.

So, I put it all out of my head and tried to be as patient as possible.

Then the fan letters started coming. E-mails and even snail mail from kids across the country who had definite ideas about what a sequel should contain. And many of those ideas weren’t anything I’d remotely been considering. They also had questions about characters that I’d felt I was pretty done with…but they obviously weren’t.

When my publisher asked me to continue the series, I was really starting from scratch. I really just knew that hey, my main character was now a vampire (and not a sparkly one or one that bites the head off of people who annoy her). I started wondering what would come next for her. What would her challenges be?

I went back to all of the emails and letters I’d been sent and made notes. What did people feel were loose ends from the first book that I ought to wrap up? What made sense to incorporate and answer in a sequel?

Ultimately, the sequel was heavily influenced by my readers. It’s a completely different book than what it would have been if I’d written it immediately following Sucks to Be Me (though the first few paragraphs are exactly the same as what I wrote in my original notes). 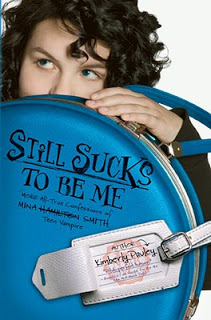 That said, the book is also probably vastly different from what it would be if I wrote it right now.

That’s the crazy thing about writing; you’re influenced by so many different things, from how you feel that day to things you’ve recently read to…well, everything.

It’s also the nature of a book. A book is never, ever finished. You simply get to a point where you and your editor are reasonably happy with how it is and you go with that. Left to our own devices, a writer would endlessly fiddle with a book, changing little thing after little thing. Or maybe that’s just me.

I’m sure that, if I get to write a third book in the Sucks to Be Me series, it will also be heavily influenced by my readers.

I’ve already heard that they’d really like to know what happens to Cameron, a character introduced in Still Sucks to Be Me: The All-True Confessions of Mina Smith, Teen Vampire (Mirrorstone, 2010).

Me? Right now I have a vague idea of what will happen to him and to Mina, and I really can’t wait to find out more myself.

Check out this Sucks to Be Me book trailer from What Bri Reads: YA Book Reviews: