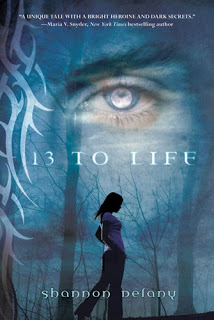 Shannon Delany is the first-time author of 13 to Life (St. Martin’s, 2010). From the promotional copy:

Something strange is stalking the small town of Junction…

When junior Jess Gillmansen gets called out of class by Guidance, she can only presume it’s for one of two reasons. Either they’ve finally figured out who wrote the scathing anti-jock editorial in the school newspaper, or they’re hosting yet another intervention for her about her mom.

She’s relieved to discover Guidance just wants her to show a new student around—but he comes with issues of his own, including a police escort.

The newest member of Junction High, Pietr Rusakova has secrets to hide–secrets that will bring big trouble to the small town of Junction—secrets including dramatic changes he’s undergoing that will surely end his life early.

Being a debut author in 2010 is frightening most days, overwhelming others. But I love that I’m so awake and aware. But being at this point at this moment in history is a challenge.

Starting as a cell-phone novelist, I’m keenly aware of the way technology is changing the publishing industry and communication overall. I feel an intense need to be a part of all of that—to be involved and on the edge of all the changes, but being in the thick of the social media revolution and being an author is a balancing act.

How “present” and “public” should an author really be? How much do we market ourselves versus our books? As necessary as a website and a blog seems to be now, and as great as it is to chat with readers and librarians through Facebook “like” pages and Twitter, I think being too available—too present—is a risk, too. There’s something to be said for the allure of mystery. Perhaps being too accessible will make writers who are savvy in social media seem less valuable.

The biggest surprise has been that there are so many debut authors going through almost the same exact things I’m dealing with. With all the connectivity, no one’s ever really alone on the publishing journey.

I decided the best way to build Junction and Farthington—the two main towns making up 13 to Life’s world—was by seeing them through my narrator’s eyes.

My narrator, Jessie, has grown up in Junction. She’s lived a rather unremarkable life (at least in her opinion) until her mother dies. And like most people, Jessie views her world with her particular vision while carrying her particular baggage.

Her world doesn’t show her anything paranormal until the first night in the story, in part because she’s never thought her world might include the paranormal. It’s startling when she realizes there’s something odd going on in her town, and she does what many of us would do initially: she dismisses it. As Jessie’s eyes gradually open, so do readers’ eyes.

As I wrote the first novel, the world around Jessie broadened and deepened. Jessie gets an even better sense of just how weird the world is in the second book (coming January 2011).

From the author’s website: In 2008, Shannon’s greatly abbreviated version of 13 to Life (written in just five weeks) won the grand prize in the first-ever cell phone novel contest in the western world through Textnovel.com. Then St. Martin’s Press offered her a contract for a series the characters. Shannon expanded on the cell phone novel version, adding the subplots and characters.