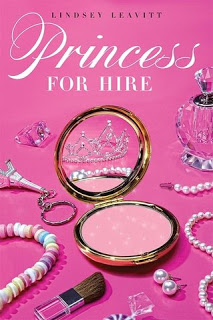 Lindsey Leavitt is the first-time author of Princess for Hire (Hyperion, 2010). From the promotional copy:

When an immaculately dressed woman steps out of an iridescent bubble and asks you if you’d like to become a substitute princess, do you a) run b) faint c) say Yes!

For Desi Bascomb, who’s been longing for a bit of glamour in her Idaho life, the choice is a definite C–that is, once she can stop pinching herself.

As her new agent Meredith explains, Desi has a rare magical ability: when she applies the ancient Egyptian formula “Royal Rouge,” she can transform temporarily into the exact lookalike of any princess who needs her subbing services.

Well, Desi soon discovers that subbing involves a lot more than wearing a tiara and waving at cameras. Like, what do you do when a bullying older sister puts you on a heinous crash diet? Or when the tribal villagers gather to watch you perform a ceremonial dance you don’t know? Or when a princess’s conflicted sweetheart shows up to break things off–and you know she would want you to change his mind?

In this hilarious, winning debut, one girl’s dream of glamour transforms into something bigger: the desire to make a positive impact. And an impact Desi makes, one royal fiasco at a time.

When my agent, Sarah Davies, signed me, all I had was a rough draft of Princess for Hire. I had queried her with another novel (Sean Griswold’s Head, out with Bloomsbury in early 2011), so I knew from the beginning that we would need to revise before submitting Princess for Hire.

Part of the reason I signed with Sarah was because of her editorial background, and that was invaluable as together we really hammered out my main character’s personality. I felt proud of the book when it went out on submission.

Although I wrote Princess for Hire as a standalone, I knew it had series potential, so I wrote a paragraph outlining sequel ideas. From this, Hyperion offered me a three-book-deal.

I didn’t hesitate for a second when Sarah asked if I could do it. Of course! The hard part was over. All I had to do was squeal at my cover and dance on the happy publishing rainbow of dewdrops and skittles.

And then I got my first revision letter. My nine page, single-spaced revision letter that broke down what we would need to do to take this standalone into series-land, including cutting the last half of the book.

Oh, I bawled. I thought my editor must hate me. I started to wonder if they had bought the book simply because they liked the title. I asked my friends how long their revision letters were and figured the shear length was a direct indication of my Lack of Writing Skills.

And then I started working on it. And my editor was right. I took probably 98% of her suggestions and re-wrote, re-tweaked, re-thought. I turned it back in (early!), secure in the fact that I had polished this puppy up!

And then I got my second revision letter. My twelve page, single-spaced letter that analyzed every new scene, explored the motivation behind it, and asked how this would matter in books 2 and 3. And I wondered how my light, fluffy book could require so much, you know, work.

But, again, I did it. And I went from despair to relief that I had such a great editor to guide me in developing this series. As is the case with most books, my book is what it is because of my editor’s hard work. Not everyone will love Princess for Hire, or even like it, but having gone through those revisions, I feel it really is the best I could do.

So I would advise other writers to really have an open mind to revision. If someone suggests something you’re not sure about, try it. You lose nothing (except for maybe time, a bit of sanity, and your waistline as you consume mass amounts of candy) but often gain new insights into your character or scene that only come from a fresh take. 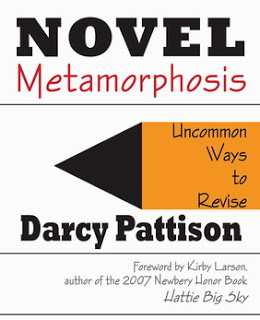 Also, in the excellent writer’s workbook, Novel Metamorphosis by Darcy Pattison (Mim’s House, 2008), Darcy suggests you write out the heart of the novel and keep it in mind as you revise. Anytime you get a note you aren’t sure about, check to see if the revision would bring you closer to your novel’s heart. That’s something you never want to lose.

I get this question a lot, and I’ve struggled to answer it because sometimes I don’t feel like I’m managing.

Sometimes, I stop writing and instead start Google-ing “How to Make a Clone” (sadly, it’s a very messy and difficult process). I have three kids, ages five and under, so you can imagine how difficult it can be to not only find the time to write, but the brain power to form coherent, let alone publishable, sentences.

That said, I have come up with two solutions that help me balance being a full-time momma and writer.

1. Flexibility, or what I call “Lunchable Weeks”

Early on, I learned publishing’s timelines can be unpredictable. And you can’t really control these crazy schedules. They’re no one’s fault; your publisher is on your side and often will do what they can to help you maintain sanity.

But it’s likely to happen at some point that your editor will tell you your edits will be in next week, and so you arrange babysitting or lighten your day job load in anticipation and…the edits never come. Another project got thrown on your editor’s endless pile, or she got sick, or she wanted to run something by sales. So they come three weeks later, and you have, oh, a week to get them back.

Enter the Lunchable(s). Now, I try to make my two older girls sensible lunches on the days they go to school. I do. But some weeks, I look at the amount of work I have and decide, this is a Lunchable week.

Meaning, this week I’m going to let a few things slide. The laundry becomes a teetering mountain of stank. My eyebrows and backyard become a bushy mess. My kids’ playroom takes on a life of its own. And email and phone calls and, you know, life is going to pile up.

And this is all okay. I’m not going to be supermom, or even showered mom, during these times. I go with the flow, get my work done, and then return back to the Land of the Living.

I think this is a lesson every debut author has to learn. You have to figure out what your priorities in life are and make peace with them because there is always more you can do when it comes to writing. Another book, a more professional book trailer, a blog tour, a school visit… if you let it, writing (and even more so the business of writing) can swallow the rest of your life whole.

I decided when I signed my first book deal that I was going to do what I could do to have a successful career at this, but in the end, I would rather fail at writing than fail as a mom or as a wife or as a functioning member of society.

You have to figure out how much you can do and let go of the rest.

In the videos below, join Lindsey Leavitt at The King’s English – March 20:

For this final video, “[b]ecause the questions are a little hard to hear, here they are.”

Is this your 1st book?
What was your journey like?
Does your mind think in small stories or long book stories?
Do you have a writing routine/schedule/habit?