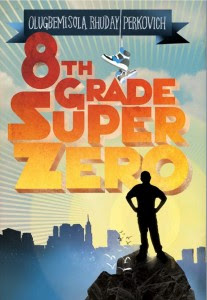 Olugbemisola Rhuday-Perkovich is the first-time author of 8th Grade Superzero (Arthur A. Levine Books/Scholastic, 2010). From the promotional copy:

After the worst first day of school ever, Reggie “Pukey” McKnight wants to get through the school year, out of the spotlight, and on the sidelines. He wants to turn his image around, but he has other things on his mind as well: his father is out of a job; life with his best friends is getting complicated by race and romance; and his nemesis Donovan is out for blood.

The elections for school president are coming up, but Reggie wouldn’t stand a chance, if he even had the courage to run.

Then he gets involved with a local homeless shelter, and begins to think about making a difference, in his world and beyond.

And when a pair of “Dora the Explorer” sneakers seem to have powers of transformation, Reggie begins to wonder: Pukey for President? It can happen…if he starts believing.

This question shouldn’t be difficult, because character development is one of my favourite parts of the process (along with revision), but…hmmm. I spend a looooong time “hanging out” with my characters, not only in the context of my story, but I imagine them in different situations, conversations, etc.., just to get a more “round” idea of who they are.

I may see someone on the subway that does something that reminds me of a character–I do a lot of people-watching. I write a lot of “extra” dialogues and scenes that may not be for the book, but help me get to know the character a bit better.

During the process of writing and revising Superzero, I learned a lot about loving my characters through whatever they do and say, even when I really dislike the things they do or say.

I try to find the “heart-breaker” things about my characters, the little things, maybe a nervous habit, a way of eating or sitting, something that they own, an unguarded moment with another character, the things that make them sympathetic and break my heart for them in a way. 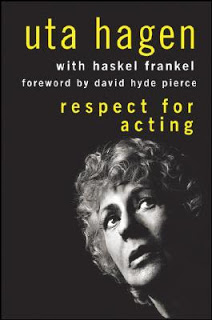 An author and writing teacher recommended the first three chapters of Respect for Acting by Uta Hagen, forward by David Hyde Pierce (Wiley, 2008) as a resource, and I think it’s wonderful. She also recommended that writers take at least one acting workshop; I did do a lot of high school theatrics in my teens (and my poor mom came to see them all), and I try to think in an actor-ly way when I’m working out my characters.

Another author and teacher once had us pick well-known stories from the Bible and “re-tell” them from another character’s perspective, and that was another amazing exercise in character development.

My own childhood is a tremendous resource. One of the benefits of having moved a lot in childhood is that each year is very clear in my mind, and so I can recall incidents, emotions, relationships…A lot of being 6, or 13, or 15 remains the same no matter the era. I also spent a lot of my adult years working as a literacy coach, and in youth development programs, and the young people that I’ve known are awesome inspiration for my work.

I used to feel sheepish about how much time I spend thinking about my characters and making random notes that are not part of the story, but I’m getting over that. I need to really know my characters in order to know how their stories go.

I struggle daily with time management. I used to defeat myself by making impossible to-do lists and then bemoan the fact that I just wasn’t going to achieve my long-held dream of being “an accomplished woman!” But I’m done with beating myself up about it…mostly.

My role as a mother is very precious to me, and I’ve learned to share my author self with my daughter in positive ways; I share my writing struggles with her as well.

I have learned to let go of the vision of the perfect writing day, where the sun rises on me sitting in a Dutailier glider on the beach, yellow teapot full of strong, sweet Assam and a plate of currant scones at my side (I’ve just baked them myself after re-decorating my apartment and sewing myself a fabulous new wardrobe), and beautifully-bound notebook of heavyweight paper in one hand, black-ink pen that-came-in-one-of-those-fancy-cases in the other, and pages and pages of perfect prose perfectly written on the first try that I can’t wait to share….

Wait, did I say that I’d let go of that?

Okay, yeah…I’m done with that. No more wishing I had more time and fewer dirty dishes, and a lot less drama. I have to work with the time and circumstances that I have, be mindful of the choices that I make and take responsibility for them.

Sometimes I don’t choose wisely, sometimes the days just don’t work out as I’d planned, but I have to forgive myself and move forward, try again.

Letting go of the illusion of complete control is helpful. I work in snippets, when I’m waiting to pick up, riding public transportation, standing in line. 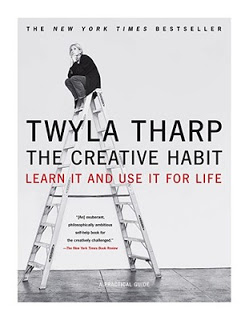 The Quotidian Mysteries by Kathleen Norris (Paulist Press, 1998) has been a huge help for me in learning to appreciate the routines of daily life–it makes a difference when I have a different attitude about doing chores, etc.

Another wonderful help is The Creative Habit: Learn It and Ue It for Life by Twyla Tharp (Simon & Schuster, 2006).

At home, I try to be careful about the time I spend checking email, reading blogs, etc.. If I don’t limit/schedule/structure my time online, I can waste hours. Greg Pincus has a great post about using social media effectively that I highly recommend.

Because I write longhand a lot, I can get myself away from the computer for first drafts and any extended writing periods; very often I take my notebook and pen (drugstore variety) and head outside.

I have also had to learn to ignore the “I wish I had time to sit around and write books, but I have a real job” voices around me that can be really loud at times. Because then I end up expending valuable energy and neglecting my very real jobs to worry over someone else’s silliness.

I am someone who loves solitude, but I am learning that it is important to be connected to other writers and artists, people who have some understanding of what you do.

Getting a couple of sentences down is no small feat on some days, and I’m going to let that be precious to me. Putting words down on paper can make one so vulnerable, writing can be such an act of love; writers, let’s be kind to ourselves!