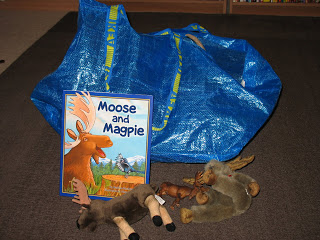 When I wrote Moose and Magpie (Sylvan Dell, 2009), I knew it would be a good school-visit book.

The book uses fiction to tell the story of a moose’s first migration with jokes, songs and riddles. I wanted find cool props to bring the imaginary to life–a hook to keep kids’ attention.

I began with props and a budget.

I made a list of all the things I wanted to have for a school visit. Then I made a budget of $300.

Would I make enough money doing school visits to earn back my investment? I took the chance, because the best thing you can do is invest in your book and yourself.

My “wish list” included antlers, moose teeth, a stuffed magpie, a preserved moose hoof or footprint, and the nest of a magpie. I knew I would get everything–and I had an idea of how I could use each item to explain science and nature in a fun way.

I wrote and called several taxidermists, looking for economical pair antlers, moose teeth or hoof sample and was shocked! Several of them thought I had a weird fetish for moose parts. One guy said I would never find moose teeth. Another laughed so hard when I asked for a moose foot, I heard the phone hit the counter.

All they had were antlers. They all quoted prices over $300!

The stuffed magpie would have been impossible on my budget. Taxidermists only made museum samples, costing thousands of dollars. The nest was out of the question because of its fragility. I marked those off my list.

It was the wrong approach. A friend once told me, “If you can’t find it at Walmart, you don’t need it.” Walmart didn’t have moose parts either, but a clerk offered to sell me a gun. Since I’m not a hunter, nor did I want to be the person who killed a moose just to get school visits, I had to find another way.

I turned to Ebay. I browsed and found many antlers for sale because crafters love to use them to make chandeliers! I lost auction after action by bidding too low. Then I noticed a lonely single antler. It was “damaged” and discolored from some leftover blood (it said so in the notes).

The damage originated from squirrels and other rodents nibbling on the tips. This happens naturally when the antlers are shed each winter because they are fantastic sources of calcium. This antler was perfect for me.

No one else bid. I won my antler for $55! The shipping was $60 from Portland, Maine–because moose antlers are heavy and require a huge box. I had spent one third of my budget.

Moose teeth were elusive. I decided the only way to get them would be in a skull with the teeth still intact. A skull would show the enormity of the animal.

I could even use it to demonstrate and how its teeth could strip trees and how the back teeth processed the cud from a moose’s four stomachs. 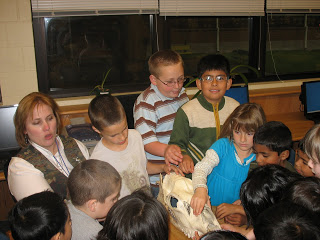 I Googled “skulls.” The first result was Skulls Unlimited (who knew?) They specialized in legally obtained osteological parts.

I didn’t even know that “osteological” meant! (The fancy word for skulls and bones.)

But I did like the term “legally obtained” because once again, I didn’t like the idea of someone poaching for my picture book.

They offered a beautiful plastic version of a female skull for $277–not in my budget.

I returned to Ebay. I watched for a moose skull for over three months. When one came up, I decided that I would bid the rest of my budget to get it.

Carefully, I stalked the computer. In the last five minutes of the auction, another shopper upped the ante and won. I came in second place to a Canadian.

I wrote the seller and told him I was a poor writer who just wanted to educate children about moose (can you hear the violins?). I asked him to notify me if he had any other moose skulls or parts that I might be able to buy at a reasonable price.

Three days later, the seller notified me that the Canadian had to default because skulls (or any animal parts) can’t be shipped across international borders. Hallelujah for international poaching laws! The skull cost me about $125, so I would have a little left for other props.

I excitedly waited for the UPS man to deliver. It was a tall box. As I ripped open the box, a pair of teeth jutted out. I screamed. Somehow, it wasn’t what I expected.

As I carefully unwrapped the skull (now named Daisy), I knew I had hit the jackpot of props.

I use the skull in so many ways. I have a child pretend he is a tree, and I use the skull to “eat” him. I pulled shy children into the conversation with a “moose kiss” from the horrible teeth of Daisy. The kids and teachers love it–and so do I.

I invested $30 in plush moose that “mooed” a bull moose call and a small plastic figure showing a moose with a full rack of antlers. In the end, I spent $255.

When I visit the schools, I carry my “moose in a bag” in a large blue plastic IKEA shopping bag. Essentially, everything I do in the classroom fits over my shoulder (although heavy). It’s essential to be able to carry your own stuff as you rush through the school. I ask for a table to set up my “toys”.

While the kids enjoy my crazy antics while reading the story, it’s the science that spurs them on. I allow them, in small groups, to come up and touch. This requires close supervision, because the objects are delicate, and kids are like bulls in a china shop. 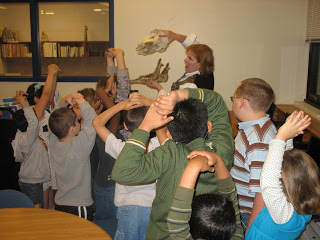 If you are looking to enhance or develop your school visit program – I suggest you find props.

• Find unique items that tie into your book.

• Remember to teach and entertain.

• Be a savvy shopper. Look in odd places.

• Make sure you can carry your items easily.

I’m looking forward to the rest of my school visits this year. I wonder if Southwest Airlines will allow my antlers on the plane as my one carry-ons, or if security will consider them a weapon?

Bettina is a mother, wife, and twice-a-day dog walker.

Moose and Magpie won the silver medal in the Mom’s Choice awards. She looks forward to the release of her young adult novel, Illegal (HarperCollins, 2011). She’s trying to figure out which props to buy from Ebay to support the book.