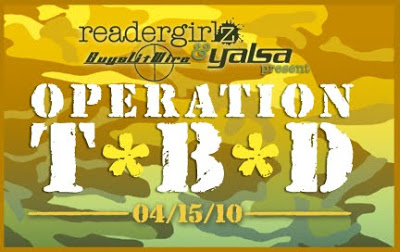 In addition, more than 100 top young adult authors will leave their books in public places for young readers to discover, and members of the public can buy books online and have them shipped to tribal libraries.

“These publishers have shown astounding vision and generosity by supporting Operation Teen Book Drop,” said readergirlz co-founder Dia Calhoun, an award-winning novelist herself. “Now underserved teens can benefit from the current explosion of high quality YA books. These teens can see their own experience, their tragedies and their triumphs in these books, books that become shining doorways to the young human spirit.”

The donations are especially significant to many Native teens. “In their lives, they really don’t have new books,” said Mary Nickless, the librarian at Ojo Encino Day School, one of 44 institutions that will benefit from Operation TBD.

A nationwide effort of authors, publishers, librarians and readers

In its third year, Operation TBD is part of a massive effort by librarians, young adult authors, and avid readers to spur reading on a nationwide scale. The day aims to encourage teens to read for the fun of it.

The effort is coordinated by readergirlz, the Young Adult Library Services Association, GuysLitWire, and a new partner, If I Can Read, I Can Do Anything, a national reading club for Native children.

• Teens and other fans of YA literature are also invited to “rock the drop.”

• GuysLitWire has created a wish list of 750 books that supporters can buy from Powells.com. Beginning April 7, these purchases can be made and sent directly to one of two tribal school libraries, Ojo Encino Day School or Alchesay High School.

“Operation TBD was originally conceived with the hope of reaching a number of teen groups,” said readergirlz co-founder Lorie Ann Grover. “While we donated books to hospitalized teens for two years, I was personally compelled to donate books to the local Muckleshoot Indian Tribe. We were thrilled to discover we could broaden this effort with If I Can Read and gift TBD to our second targeted group, Native teens.”

“By making Operation TBD part of Support Teen Literature Day, YALSA and its partners help raise awareness of the importance of teen literature to all teens,” said Linda W. Braun, YALSA President. “Our thanks to the publishers, If I Can Read I Can Do Anything, readergirlz and Guys Lit Wire for joining us in supporting such a worthy cause.”

Everyone who participates in Operation TBD is invited to celebrate at the TBD Post-Op Party on April 15 at the readergirlz blog.

For more than 50 years, YALSA has been the world leader in selecting books, videos, and audiobooks for teens.

Guys Lit Wire brings literary news and reviews to the attention of teenage boys and the people who care about them. Working to combat the perception that teen boys aren’t as well read as teen girls, the organization seeks out literature uniquely targeted toward teen male readers in hopes of bringing attention of good books to guys who might have missed them.

About If I Can Read, I Can Do Anything

If I Can Read, I Can Do Anything is a national reading club for Native children directed by Dr. Loriene Roy. The program works to encourage reading among Native children by offering incentives, sending books to schools, and sponsoring activities.

readergirlz is the recipient of a 2007 James Patterson PageTurner Award and a 2009 Innovations in Reading Prize from the National Book Foundation.

To promote teen literacy and leadership in girls, readergirlz features a different YA novel and corresponding community service project every month, and offers chats with authors and an author-in-residency program for aspiring writers.