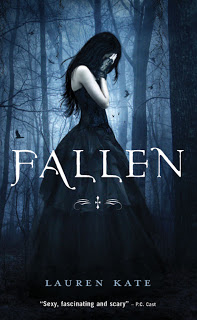 Lauren Kate is the first-time author of Fallen (Delacorte, 2009). From the promotional copy:

Mysterious and aloof, he captures Luce Price’s attention from the moment she sees him on her first day at the Sword & Cross boarding school in sultry Savannah, Georgia. He’s the one bright spot in a place where cell phones are forbidden, the other students are all screw-ups, and security cameras watch every move.

Even though Daniel wants nothing to do with Luce–and goes out of his way to make that very clear–she can’t let it go. Drawn to him like a moth to a flame, she has to find out what Daniel is so desperate to keep secret . . . even if it kills her.

Dangerously exciting and darkly romantic, Fallen is a page turning thriller and the ultimate love story.

Is it possible to be both a plotter and a plunger? Or a plunger who’s working on plotting? And sometimes a plotter who’s dying to plunge? I have struggled with plot for my whole writing career, and I’m still looking for the perfect mix of meticulousness and mystery.

Character is easy for me. Dialogue? Bring it on. Descriptions sometimes have to be pulled out of me like teeth, but I’ll give ‘em up eventually.

But plot? Most of the time I don’t have a clue. I’m the writer who spent six years working on a love story between a teen girl and her uncle—whose plot still needs a major kick in the pants to come to any sort of resolution.

I’m also the writer who kicked out four pseudonymous novels in two years with fun but very straightforward plots. You could say I was looking for a middle ground. 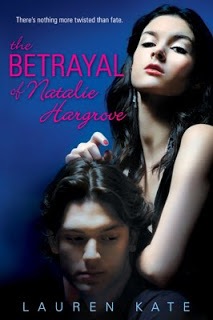 The two novels I have published on my own are getting closer to that. The Betrayal of Natalie Hargrove (Razorbill, 2009) and Fallen were both meticulously plotted out before I wrote them. Character descriptions, paragraph-long synopses for each chapter, “big” endings, the whole deal.

Both outlines (along with a few chapters) were shared with writer-friends, agents and/or editors at very early stages.

And because the stories were larger and more complicated than I’d first realized, I actually did revisions on the outlines. Way more plotting than I’d ever done before.

At the end of plotting, when I was ready to plunge, it was comforting to sit down every day and know I had to write a chapter where X happened, followed by Y, and then Z.

But sometimes, it was also uninspiring. Suddenly, Y bored me, and Z felt really predictable. But it was in the outline, which fit together like a puzzle! What to do?

Eventually, I realized there were days when I would have to loosen my leash from my outlines, to let the story adapt and change organically as I went along. This was a very good decision, one that took me too long to make.

But I know part of it is because I’m constantly refining my plotter-to-plunger ratio: freeing myself to stray when inspiration strikes, returning to my outline when I want to feel more grounded.

When I started writing Fallen, I wasn’t really aware that I was building a world. Looking back, I wonder how that was possible. Because world-building seems like Step One in how to write paranormal fiction, doesn’t it?

I used to work in YA publishing and got to edit many paranormal and fantasy authors. Working with them, I was always very conscious of the ways in which they built and experimented with their worlds.

I even enjoyed being a task-master if they broke the rules they’d set up. “But you said a wizard could only come back from the dead eleven times! This makes twelve.” That kind of thing.

But when it came to writing my own story, Fallen really began with the character. I had Lucinda and I had her conflict: she was looking for an escape from her past and a connection to something that felt real. That was where Daniel came in—bringing with him the beginnings of what I guess is called “the world.”

Suddenly, angels, demons, millennium-old curses, scores of reincarnations, and dueling forces of good and evil were all battling for a piece of the action in my little romance story. So it—the world, I mean—had to get bigger. Yank us into the world of Sword and Cross, my agent demanded when I sent him the first few chapters. Make it oppressive and inescapable and all-encompassing.

Oppressive? I had never written paranormal fiction in my life, and suddenly I wondered: could I do it?

Writers talk frequently about the worlds of fantasy and paranormal fiction, but of course, every novel has a world. A world is really just a setting, isn’t it? A setting whose bricks and mortar are really just description and imagination.

Even though, technically, Long Island already existed, Fitzgerald still had to build the world in The Great Gatsby (1925), didn’t he? You could say it’s just description, but the kind of description that informs everything else in the book—the protagonist, the conflicts, the emotional arcs of every character—that’s when description becomes world-building.

Turns out, it’s much less scary to think about world-building as imaginative description. The biggest difference between writing the worlds of straightforward contemporary fiction and paranormal fiction is that you get to make up fun new rules and dialect. I can’t say where most of these terms or rules come from. They just pop out of my mind onto the screen of my computer, and then I spend the rest of the series working through (and sometimes paying the price for) that little bit of impulsiveness.

For example, at the end of Fallen, I made an offhanded reference to a truce that is to last for eighteen days. Didn’t think too much about it, kind of just made it up. I had no idea that that one line would dictate the entire structure of the sequel, Torment. But once it went to the printer and I sat down to plot out Torment, eighteen days was what I had to work with, so eighteen days it was!

I’m not complaining, but I’ve learned to keep a notebook with a list of rules and terms for when I forget what I’ve tossed into Luce’s world. And I love the fact that I have three more books to work though, to let the world grow bigger, denser, and more complicated over the course of the series.

As you can see, building the world of my books is something I’m still figuring out, but I’m learning how to make the most of it, and sometimes even to enjoy it.