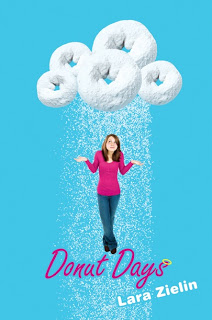 Lara Zielin is the first-time author of Donut Days (Putnam, 2009), which was recently name to the 2010 Texas Library Association Lone Star List. From the promotional copy:

Emma has a lot going on. Her best friend’s not speaking to her, a boy she’s known all her life is suddenly smokin’ hot and in love with her, and oh yes, her evangelical minister parents may lose their church, especially if her mother keeps giving sermons saying Adam was a hermaphrodite.

But this weekend Emma’s only focused on Crispy Dream, a hot new donut franchise opening in town, where Harley bikers and Frodo wannabes camp out waiting to be the first ones served. Writing the best feature story on the camp for the local paper might just win Emma a scholarship to attend a non-Christian college. But soon enough Emma finds the donut camp isn’t quite the perfect escape from all her troubles at Living Word Redeemer.

In a fresh, funny voice, newcomer Lara Zielin offers up a mesmerizing, fast-paced narrative full of wit and insight.

Recently, at a Chicago book event with several other authors who’d had their debut novels published in 2009, someone in the audience asked how long the writing process took for each of us, from rough start to finished publication.

I penned my first draft of Donut Days in 2001. It was pretty godawful. I revised and re-wrote for a long time, and it wasn’t until early 2007 when I finally landed an agent.

The book sold relatively quickly, and then came the editing process. Somehow, in my head, I assumed this wouldn’t really be that arduous or take that long.

The editing process was super tough for me [don’t miss video below!].

My book went through many, many drafts and, even though my editor had great insights the whole time and was absolutely directing me toward the right changes, I just couldn’t make it all work. At one point I submitted a draft that was largely acknowledged as being much worse than the one that came before it.

My halting ability to do what my editor really needed me to definitely pushed out the publication date. I’m happy, actually, that it was 2009; for a while there, it was looking like it was going to be 2010.

I’m so thankful I had a solid editor who really was improving the book and not just asking for things willy-nilly. Ironically, I’m a magazine editor for my day job, and I kept thinking, I have the word “editor” in my job title. Why can’t I do what she needs me to do? I never quite figured that out, actually. The good news is, my editor’s work really made the novel sing–and I think that’s what kept me going, even amid all the frustration.

My second book, Promgate, which we’re editing right now, is slated for release in 2011. I’m hoping I’ll have an easier time of it, now that I have one book under my belt. We’ll see!

While there is a huge part of me that would love to write full-time, there’s a bigger part of me that’s grateful I have a job that I love doing work where I get to be creative and where I am surrounded by awesome colleagues. I think if my income was at all dependent on my writing, I would stress out about it a lot more.

I read once that the best advice anyone could offer for newly published writers is: Don’t quit your day job. Adopting an attitude that embraces full-time work for the mental freedom it offers me–versus carping about how I can’t have yoga pants for business attire–has been a great help.

In general, I’m the kind of person who thrives on structure. If you give me carte blanche to do whatever I want, I’ll probably lay around in my jammies all day eating cheese. It’s that bad. Having a day job is a good thing for me: it means I get up at a regular time, that I have a routine, and that I have to plan out when I’m going to write and actually be slightly thoughtful about it.

Most of the time, I don’t write during the workweek. Usually, I try and crave out some time on the weekends, ideally in the morning because I’m most productive (and creative) before noon. The challenge, of course, is to not fill up my weekend with errands and social events so that I can actually use my free time for writing.

I have found that it’s essential for me to communicate with my husband about what my writing needs are, and to collaborate with him about how to get it all done. So, for example, we had a schedule for a while where, during the workweek, I would walk our dog Amos in the morning, and my husband would walk Amos at night. Now, that schedule varies because I’ve decided to either write some mornings or attend a spin class. But I couldn’t have made that change without the help of my husband and communicating with him about how to make sure things–like the dog–still get taken care of.

One area where I’m looking to improve my productivity is to be more regular about writing. Because I mostly write on weekends, I won’t pen a word for five days, then I’ll sit down and pound out 6,000 words in one day. I think these fits and starts are fine, but I would like to try and have a bit more of a steady writing diet, versus starving then gorging myself.

I guess this means I’ll probably have to watch less Reality TV in the evenings (it was nice knowing you, “Ghost Hunters” and “Top Chef”!) but ultimately, I know it will be a positive change. And hopefully one that yields more published results!

The New Voices Series is a celebration of debut authors of 2009.