The winner for best picture book was A Coyote Solstice Tale by Thomas King, illustrated by Gary Clement (Groundwood, 2009). From the promotional copy:

Trickster Coyote is having his friends over for a festive solstice get-together in the woods when a little girl comes by unexpectedly. She leads the party-goers through the snowy woods to a shopping mall–a place they have never seen before.

Coyote gleefully shops with abandon, only to discover that filling your shopping cart with goodies is not quite the same thing as actually paying for them.

The trickster is tricked and goes back to his cabin in the woods–somewhat subdued–though nothing can keep Coyote down for long.

The winner for best middle-school book was Meet Christopher: An Osage Indian Boy from Oklahoma by Genevieve Simermeyer, illustrated with photographs by Katherine Fogden (Council Oak Books, 2008, produced in association with the Smithsonian Institution’s National Museum of the American Indian). From the promotional copy:

In this fourth book in the series, My World: Young Native Americans Today, meet Christopher, an eleven-year-old Osage boy from northeast Oklahoma.

Join Christopher and his family at the annual I’n-lon-shka Dances on the Osage Reservation, where they gather for outdoor feasts, dress in their traditional outfits, and dance with the entire community. Go fishing at the lake with Christopher and his brothers, hear him play the trombone in music class, and learn the Osage language as he learns it, too. Watch Christopher’s mother practice finger weaving, and meet his grandmother, who works at the Osage tribal museum. Learn the stories of Osage ancestors, those who hunted buffalo and lived in hide-covered lodges, and those who first learned to drive cars and pilot airplanes. 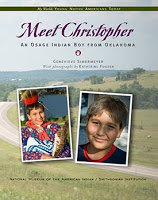 The winner for best young adult book was Between the Deep Blue Sea and Me: A Novel by Lurline Wailana McGregor (Kamehameha, 2008). From the promotional copy:

Moana Kawelo, PhD, has a promising career as a museum curator in Los Angeles. The untimely death of her father–and the gravitational pull of Hawai’i when she returns home for his funeral–causes Moana to question her motivations and her glamorous life in California.

Between the Deep Blue Sea and Me is the story of Moana’s struggle to understand her ancestral responsibilities, mend relationships, and find her identity as a Hawaiian in today’s world.

“He Hawai’i Mau:” “This short film [below] is a two-minute journey through the life of the filmmaker [and author of the AILA award-winning novel for YAs] Lurline Wailana McGregor. Her voice-over describes her life as shown through old family movies and photos from her childhood to the present day. The theme is her growing awareness of her Hawaiian identity, what defines her today as a Hawaiian and why Hawaiians have become so passionate about their culture and its future.”

From the AILA website: “Books selected to receive the award will present Native Americans in the fullness of their humanity in the present and past contexts. Additional information about the award and criteria used to evaluate books can be found here.”