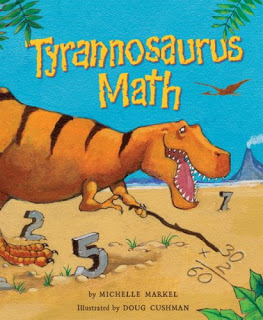 Michelle Markel is the author of Tyrannosaurus Math (Tricycle/Random House, 2009).

What’s the most fun you’ve ever had working on a book? Why?

Tyrannosaurus Math was a pleasure for many reasons. It was a quick and easy conception. I was substituting in a second grade classroom, we’d run out of math activities, we’d covered a very dry dinosaur story in the morning, and the classroom library books were uninspired. We were all pretty bored.

I invented some word problems using dinos that the kids loved. Voila, there it came–math + dinosaurs = a fun idea for a children’s book!

There were few complications at birth (unlike my other books, where I spent hours, months, in protracted labor). I just amused myself creating the character–a bone-munching, number-crunching dinosaur.

(On reflection, I think the Tyrannosaurus was a way of channeling my violent disinclination to math. That, plus I’ve always had a weakness for T-Rex. I mean, he’s so vicious, but those short arms make him comical).

I also had a terrific editor, Joanne Taylor, who gently pushed me in the right direction. The revisions she suggested led me to deepen the emotional part of the story. The sibling conflict figures into the climax and resolution, which it hadn’t originally. And Joanne found the perfect illustrator, Doug Cushman, who totally got the humor. 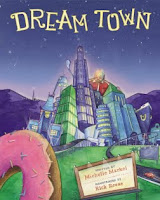 Well, in flagrant disregard of marketing wisdom, I haven’t branded myself. I’ve got a wide range of interests, and I’ve doggedly written and published about just a few of them: social issues, cultural diversity, art, history. I wanted to get the stories out, even if it meant sometimes going with smaller presses.

The old saw is that “a good book will find its home.” Finding that home, i.e. the editor who falls in love with your story, is key, but it takes patience and perseverance (oh, if only there was Match.com for writers and editors! ).

When I started writing back in the ’90s I couldn’t search the Internet–or Cynsations–for information about the publishing industry like you can now. I managed to snag the right editors by joining SCBWI, reading Publishers Weekly, going to conferences, book fairs, and later being on listservs.

But I also inadvertently sold a book because of my careless tracking system. I submitted two different picture books to two editors at Houghton Mifflin, which is bad form. As soon as I discovered my mistake, I alerted the editors. When one of them rejected the manuscript I’d sent to her, the other found out and snapped it up. I have an agent now, who is discouraging me from wantonly spreading myself around at the houses.

In a competitive industry, the manuscripts that take chances (either stylistically or by choice of subject matter) are going to be noticed. I thought I was going out on a limb in writing a book about a labor organizer most people haven’t heard of, but the story was compelling. The heroine had to be honored. (See below). To be successful, you need to take risks and you have to be generous. Writing is a gift, an act of love. 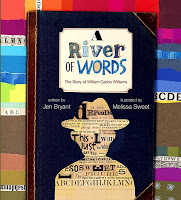 Brave Girl: Clara Lemlich and the Shirtwaist Makers Strike of 1909–about a young Jewish/Russian immigrant who started the largest strike of women workers in U.S. history (HarperCollins, 2011). I’m delighted that Melissa Sweet, who received a Caldecott Honor for River of Words: The Story of William Carlos Williams (Eerdmans, 2008), will illustrate.

And a biography about Henri Rousseau from Eerdmans. The story is all about a highly unlikely triumph over relentless rejection, so lots of writers will relate!

From “The Rex Green Show:” in the video below, Dino-host Rex Green interviews author Michelle Markel about her new math book for kids. Note: Michelle does a great job of holding her own versus the host, a T. rex hand puppet.