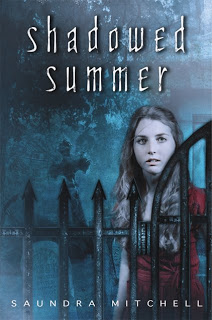 Saundra Mitchell is the first-time author of Shadowed Summer (Delacorte, 2009). From the promotional copy:

Iris is ready for another hot, routine summer in her small Louisiana town, hanging around the Red Stripe grocery with her best friend, Collette, and traipsing through the cemetery telling each other spooky stories and pretending to cast spells. Except this summer, Iris doesn’t have to make up a story. This summer, one falls right in her lap.

Years ago, before Iris was born, a local boy named Elijah Landry disappeared. All that remained of him were whispers and hushed gossip in the church pews. Until this summer.

A ghost begins to haunt Iris, and she’s certain it’s the ghost of Elijah. What really happened to him? And why, of all people, has he chosen Iris to come back to?

I was the latest in a long line of women poor in cash but rich in books.

My grandmother, who spent her childhood struggling through the Depression, cared about two things: making sure I had an orange on Christmas, and checking to see if I’d read A Girl of the Limberlost by Gene Stratton-Porter (Grosset & Dunlap, 1909) yet. She waxed long and passionate about books, a love she passed on to my mother.

Mom had a huge collection at home–everything from romance to horror to literature to non-fiction. She claims she took me to get my first library card the day she found seven-year-old me, attempting to read either Forever Amber by Kathleen Winsor (Macmillan, 1944) or The Lodger by Marie Belloc Lowndes (Methuen, 1913.) Whichever it was–it was 1980, and if you can’t tell by the dates of the books–our wealth really was in pages.

Books passed down, books collected at yard sales, books borrowed from the library–I remember long summers of my aunts and my mother and my grandmother, all sprawled out in the back yard under the maples, each with their respective novels.

And because we had hardship with our books, as I got older, I sought out stories that reflected my neighborhood, my life.

Bridge to Terabithia was the first book I read that told me: sometimes bad things just happen, and not just to you. It made me feel less alone.

So did The Outsiders by S.E. Hinton (Viking Press, 1967). Oh man, it was good reading about characters who were scraping, too. Who knew what it was like to be hungry, and pressed out of college, and given up on before you ever started.

There’s a lot of noble poverty in fiction–maybe that makes other people feel better. But The Outsiders made me feel better, because I knew the kids who had to drop out to work. I knew the kids who got kicked around by their parents–they slept on our couch when they couldn’t find anywhere else to sleep. Reading about other lives that looked like mine, that made me feel less alone, too.

Then there was It by Stephen King (Viking, 1986.) First of all, it absolutely cemented my distrust of clowns, but secondly, what a revelation it was! That was the book that taught me to hide ordinary monsters in extraordinary ones, the book where I discovered you can talk about the most hideous things if you fang them and put them down a sewer, and steal away a little kid’s inhaler that turns out to be filled with water anyway.

If Bridge and Outsiders made me feel less alone, It hinted that if I wanted to, if I dared to, I could say something and other people might hear it.

Which is where The Silver Kiss by Annette Curtis Klause (Dell, 1992) finished defining me as a reader turning into an author. The ideas that It gave me, that a book could be real and honest, and bigger than scrubby, dirty, inglorious life at the same time–that’s what I found in The Silver Kiss. It was everything that interested me–broken people, the confession that sometimes things just are, and an end is an end–happy is where you find it–that there are monsters, and sometimes it’s us–it really was everything; it was everything I believed in one slim volume.

And that’s what I had in mind when I sat down, many years later, to write Shadowed Summer. A book that clings in young memory like A Girl of the Limberlost did for my grandmother, like Outsiders and Terabithia did for me–a book about the monsters we see, and the monsters we are, like It. A book that offers the relief of an end, even if it’s not the happily ever after end, like The Silver Kiss.

Those four books kept me company as I grew up, and they’re the four books that made my own first novel possible.

Aside from specific titles, I’ve always been drawn to the idea of the paranormal, the supernatural, all things unexplained. There’s so much room in there for the imagination to escape–and it’s a delicious way to try to understand what is–by looking at what isn’t.

I was a frequent guest of the Dewey 130s in the library–that’s where Hans Holzer‘s ghost hunting guides could be found. How to develop ESP, stories about the Bermuda Triangle, the chupacabra, the Jersey Devil, oh, and the vicious, wicked Bell Witch! But I loved fiction too–I could slip into a good, paranormal story as easily as I put on shoes.

Bid Time Return by Richard Matheson (Viking Press, 1975) absolutely convinced me that if I tried hard enough, I could go back in time. I spent hours lying in bed, trying to erase now from myself, trying to get back to see the coronation of Elizabeth I, to see Tutankhamun gaze out at the already-ancient pyramids, to just see the whole world before it became the world I knew.

So it’s not surprising that Stranger with My Face by Lois Duncan (Laurel Leaf, 1981) became my next favorite- astral projection! I spent hours trying to do that, too–which of course, led to ghosts.

If there’s a soul in me to get out, what happens to that when my body is done? Ghosts have become a lifelong fascination for me, because they straddle the universe–what it is to be alive, what it means to be dead.

They ask the most essential, most human questions of all, and there’s so much variety. Sentimental to terrifying, longing to joyful–no matter what I’m in the mood for, I can find it in a ghost story. It’s bulletproof for me.

There’s an anthology that I can no longer recall the title–but there was a wonderful story about a water ghost in it. And I sit, and I think about it– the moment the ghost glided out onto the ice and froze. It’s so vivid, I can see it–all these years later, it’s still so vivid, it feels real.

I love just about everything Betty Ren Wright ever wrote; Mary Downing Hahn, Lois Duncan. I love Stephen King, whose ghosts always seem to be contained in some damaged, longing character.

The paranormal continues to captivate me. Even when it’s frightening, it’s a strange and beautiful place to think about what it means to be alive. I don’t think I can ever get tired of it.

All the way on the other end, almost the opposite from writing books, is promoting books. There’s nothing mystical about it, there are no arcane signs or glorious portents. It’s straight-up work. I’ve always been a kind of an ox–I just go and go and go until there is simply nowhere else to go, and that’s how I’ve approached promoting my novel.

After Random House’s catalog came out–signaling that people could start ordering my book–I sent postcards to booksellers and libraries and schools. I couldn’t stop at a hundred or two, though. In the end, I sent about 800 postcards–every single one with a handwritten message on them–to every children’s indie in the U.S. and Canada, to every indie in my state and the state where my book is set, to every store specializing in horror or mystery.

And after the book came out, I sent more postcards–to ghost hunting societies and paranormal clubs. But by then, I also sent copies of my book. Signed copies, probably 150 total, to reviewers and bloggers, to stores that weren’t stocking me in the hopes they would. To libraries, for contests, for anything. If it was a legitimate cause, I’d send a book!

To all those reviewers and bloggers, I also offered myself up for interviews and guest blogs. My general rule is–if it’s on the Internet, the answer is “yes.” I can’t often make personal appearances, but I can show up online. I’ve only had to say “no” once, and I’d like to try to keep it at that number.

So my advice for other debuts is–say “yes” as much as possible. Give away as many books as you can afford to. And don’t stop just because your book came out four months ago. Eventually opportunities dwindle, but as long as there’s something you can do, you should do it.

Because it’s my belief that people can’t buy a book if they don’t know about it. Sometimes it’s pleasure–getting to write guest blogs is a favorite of mine; sometimes it’s a pain–writing something on every postcard is a nightmare.

But that’s what I do when I’m not writing the next book–I’m saying “yes” to the last one.

I’m an ox. And I think that works!

Read a previous Cynsations interview with Saundra about Shadowed Summer.

View Shadowed Summer Secrets #1: an insight into a decision she made while writing the novel, set in virtual Ondine, La.