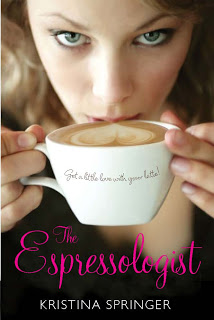 Kristina Springer is the debut author of The Espressologist (Farrar, Straus and Giroux, 2009)(read her LJ). From the promotional copy:

What’s your drink of choice? Is it a small pumpkin spice latte? Then you’re lots of fun and a bit sassy. Or a medium americano? You prefer simplicity in life. Or perhaps it’s a small decaf soy sugar-free hazelnut caffe latte? Some might call you a yuppie.

Seventeen-year-old barista Jane Turner has this theory that you can tell a lot about a person by their regular coffee drink. She scribbles it all down in a notebook and calls it Espressology.

So it’s not a totally crazy idea when Jane starts hooking up some of her friends based on their coffee orders. Like her best friend, Em, a medium hot chocolate, and Cam, a toffee nut latte.

But when her boss, Derek, gets wind of Jane’s Espressology, he makes it an in-store holiday promotion, promising customers their perfect matches for the price of their favorite coffee.

Things are going better than Derek could ever have hoped, so why is Jane so freaked out? Does it have anything to do with Em dating Cam? She’s the one who set them up! She should be happy for them, right?

With overtones of Jane Austen‘s Emma [1815] and brimming with humor and heart, this sweet, frothy debut will be savored by readers.

Could you tell us the story of “the call” or “the email” when you found out that your book had sold? How did you react?

For me, “the call” happened in a blur. I had been querying for an agent for my first book for a long time. I had always had the number 100 in mind for when I’d stop querying agents. And I was getting really close to that.

Then I started querying the second book I wrote (The Espressologist) at the same time, and within the first ten queries, suddenly I had two offers of representation.

I talked to both agents, chose one, and she submitted my book that same night. Wow right?

Next thing I know we have an offer within the week. I was ecstatic! But then it didn’t stop there.

My agent notified the other editors looking at the book that we were moving toward a close, and the next thing I knew there was an auction with four publishers. Four really great, I’d love to go with any of them, publishers!

It was completely unbelievable to me. I kept thinking how the heck is this happening so fast? This is really weird right? I was home with my kids the day of my auction (at that time there were only three of them, and they were ages four, two, and one). My agent was forwarding me offers and calling me throughout the day to talk about each one. It was pretty wild.

We narrowed it down to the two best offers, and then I talked to both editors on the phone to see what their vision for the book was and whom I clicked with the best. It was a small miracle that my children were letting me get away with all this talking on the phone that day.

I think I was letting them have a movie marathon and filling them with treats to keep the commotion down to a low roar.

I really liked the two top editors and their publishers, and I struggled for the next several hours, trying to decide who to go with. I felt bad that I was taking so long to decide and that people were waiting on me and I didn’t want to disappoint anyone.

It was actually pretty tough. I kept wishing my husband or another person over the age of four was there to help me decide what to do. I paced my living room a lot. I talked to my agent of course, but she didn’t want to sway me one way or the other.

I finally just went with my gut and chose Farrar, Straus and Giroux for my publisher for a two-book hardcover with paperback follow-up deal. This was two and a half years ago, so while the sale happened in a blur, the process of bringing it to a book took awhile.

I couldn’t be happier with the final product, though, and working with my editor and FSG has been absolutely wonderful. 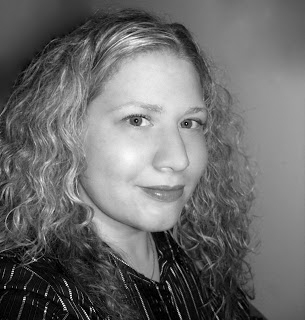 I started writing fiction after I had my second child, about four years ago. At that point, I had a two year old and an infant and I was teaching technical writing at DePaul University in the evenings (I had been a technical writer prior to having kids, and I received my Masters in Writing from DePaul). I was also writing freelance articles for magazines and Web sites and doing online tutoring. So I guess I was the sort that liked to be busy.

I had an idea for a young adult book, but I had never written a book and also had no confidence in my fiction writing abilities whatsoever so I was leery of trying.

I told my husband my idea one day when we were in the car, and he said, “you have to write this.”

But he insisted and said just do it, take time for yourself.

So I guess I started looking at writing like that. One or two nights a week after my husband got home from work, I’d pack up my laptop and head for Starbucks. And it was a total de-stresser. It was like my yoga, my relaxation. These sessions only lasted two or three hours, but in four months, I had my first manuscript completed. So I did it again. And again. And it just became routine.

I’m working on my seventh manuscript now (the first two being published are the second and sixth ones that I wrote). And I have four kids (ages six, four, three, and one). Even though things are more hectic with school and activities and play dates now, I still go to Starbucks to write one or two times a week.

I’ve never been the kind of writer that wrote every single day. And I find this works out better for me actually. Because the days I’m not writing, I’m thinking about writing. And jotting down a few notes here and there. So when I have time to get out and write again I’m really plowing through some pages.

I’ve been through many rounds of edits with my first and second book, and while there have been deadlines, I’ve never found them to be tough to make.

If I know there are going to be some tight ones, then I just go out to write every night that I can for awhile. This has only happened to me a couple of times.

I have to also add, after I sold my books I did drop the other evening jobs (teaching, freelancing, tutoring) to concentrate more on writing.

Really, I find being an author to be a fantastic career while raising children. I get to spend the days with my kids and then do my thing when my husband gets home. I would tell other authors trying to do the same thing to accept help from a support system (husband, grandma etc.) and don’t feel badly if you need to take a Saturday afternoon here and there to go write.

Kristina’s next release will be My Fake Boyfriend Is Better Than Yours (Farrar, Straus, and Giroux, 2010).