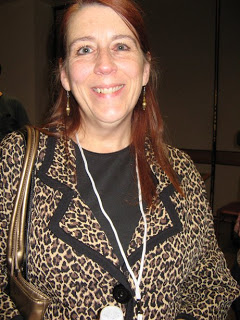 Cyndi Hughes is the executive director of the Writers’ League of Texas.

She was the proprietor of Cynthia Hughes Literary Management, a literary publicity and consulting firm based in Austin.

Before founding CHLM, she was the founding director of the Texas Book Festival from 1996 to 2003.

Claim to fame: She’s the only person in the world who coordinated two state book festivals with two different governors (George W. Bush and Kathleen Sebelius) — she also produced the 2007 Kansas Book Festival in Wichita (and yes, she’s one of those crazy Jayhawks!).

She lives in Austin with Patsy Clementine, a Cavalier King Charles Spaniel who specializes in snoring, and Edina the Cat, a.k.a. Our Lady of Perpetual Hunger.

What is the Writers’ League of Texas? What is its mission?

The Writers’ League of Texas is a nonprofit professional association that supports writers of all kinds at any stage of their career. The League’s mission is to elevate the art of writing and promote literacy.

What can you tell us about the membership? What professional interests are represented? From where do folks hail?

The WLT has around 1,300 members; about half of them are in the Austin/Central Texas area. The other half are spread out all over Texas and even in other states. Most members are writers, although we do have some publishers, editors, and even publicists in our membership.

We cover the gamut of writers. Some want to write just for themselves and their families; others have had multiple books published. Our membership includes authors, journalists, business writers, historians, poets, essayists, bloggers, children’s-YA writers, graphic novelists–you name it, we probably have someone who writes it!

With the caveat that of course you can’t mention everyone, who are just a few of the League’s living legends, grand dudes and ladies, established pros, rising stars, and new hot things? 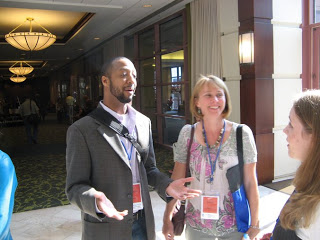 How would you describe the culture of the organization?

Welcoming and open and professional, although also somewhat disparate, because of the geographical sprawl of our membership! But we’re working on that through some online initiatives and groups.

Readers seeking the complete low-down on the League’s programs and events can check out the website. But could you highlight for us which are most popular with members and why?

The biggie is the annual Writers’ League of Texas Agents Conference, which takes place in June. We bring in around 20-25 literary agents from New York and elsewhere, along with editors from various publishing houses, to meet with aspiring authors and give them the opportunity to pitch their books and learn about the latest trends in the publishing industry.

Several authors landed book deals as a result of the conference (most recently, the wonderful Jacqueline Kelly with The Evolution of Calpurnia Tate (Holt, 2009)).

Behind that would be our annual Summer Writing Retreat in Alpine, Texas, our ongoing classes and workshops, and our writing/book contests.

Many Cynsations readers are children’s/YA writers. What does the League offer specifically to them?

We offer classes and workshops on the craft of writing and the business of publishing (such as how to write a query letter or synopsis and how to get started in social media and publicity), along with the opportunity to meet agents and editors who specialize in children’s-YA literature.

How did the League come to be? Could you tell us about its history and growth over the years?

The League was founded in 1981 as the Austin Writers’ League to provide a community for writers in the Austin area. Over time, the organization grew and expanded. Then in around 2000 the League changed its name to the Writers’ League of Texas with the goal of being more statewide in scope.

What do you love about the job? What are its challenges?

What I love about my job is dreaming up new ideas for programs and events that can better serve our members along with writers who’ve never heard of the Writers’ League! And from a purely selfish view, I just love being immersed in the world of books and writers and doing everything I can to promote Texas writers.

What advice do you have for event planners in undertaking a conference of similar scope?

No, seriously, it’s all about three things: (1) developing a dynamic program with the top speakers you can land; (2) clear, concise, and frequent communication with everyone — hotel staff, agents, editors, attendees, sponsors, staff, volunteers; and (3) extending Texas hospitality to everyone and treating them like rock stars!

What new horizons do you foresee for the League in the future?

Expansion comes immediately to mind. We’re working to expand programming to other cities so we can help our members connect with one another in both social and professional settings.

We’re also developing online programming and benefits and constantly upgrading our programs and events to take the Writers’ League to its next level.

Outside of your role as WLT executive director, what do you do in life?

Ha ha ha — what don’t I do! Well, let’s start with this: I read (big surprise, that) and write, dote on my Cavalier, indulge in my divided sports loyalties (Nebraska football, Kansas basketball, and UT baseball, with the Chicago Cubs and Red Sox thrown in for good measure).

I also knit, love to cook (in my parallel life, I’m a skinny pastry chef), and play guitar with the little-known (for good reason) “We Don’t Suck Too Bads.”

Interesting factoid: I once had an encounter with a rabid bat and had to have rabies shots. But the good news is that I’m not foaming at the mouth anymore. I also write about books for DogCanyon.org and write for the Writers’ League’s A Brief Word blog, Dr. Greg Jackson’s Reality Check: How to Live Better Longer blog, and my own blog, 50 Fabulous Firsts.

Oh yeah, and I love living in Austin, Texas, the center of my literary universe!