So, as a “Smith,” I know something about common names. But I’d never put “Uma Krishnaswami/y” in that category! Is it true that there are two of you? 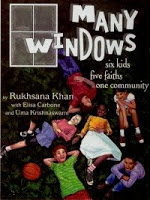 Uma Krishnaswami: Yes, although the OU (Other Uma) spells her last name with a Y on the end–“Krishnaswamy,” not “Krishnaswami.”

How did you come to connect with one another?

I got an e-mail message from a reader in France who said he adored my books.

Well, that’s always nice to hear, but I noticed that I hadn’t written some of the books he listed. I wrote back pointing this out.

He replied, insisting, “I know that. You illustrated them,” and went on to tell me what he loved about my art.

Since I can’t draw to save my life, I astutely concluded I must have a namesake.

Google led me to her via one of her publishers, who, it turns out, is right around the corner from my parents’ house in Chennai, India. Just another example of the small-and-shrinking world in action.

What are the challenges of having the same byline? 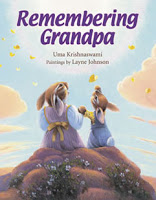 Uma Krishnaswami: Well, I suppose reader confusion is one. I just got invited to a conference in Singapore and decided I’d better check and make sure I’m the one they really want. (It turns out that I am, but it’s best to clarify).

Another is that I sometimes get author copies intended for her, and once she nearly got a check meant for me. (Or was it the other way around? I can’t remember.)

What about it charms you?

Uma Krishnaswami: I love her artwork–it’s luscious and smart, combines a folk feel with a modern sensibility. I’d love to do a whole book with Uma doing the art–then we’d really stump everyone!

As it is, the name we share has taken on the quality of an extended joke. When Cicada magazine published a poem of mine titled “Lifeline,” they didn’t tell me they were hiring Uma to do the art. They added a little footnote to the effect that they were sometimes confused too.

What did you think when you found out about Uma Krishnaswami, who’s also a children’s book creator (though an author, not illustrator)?

Uma Krishnaswamy: I go this call one afternoon out of the blue, and the voice on the other end introduced herself as well…yours truly!

Oh, Oh! I thought a huge joke was being played on me, or that postprandial wooziness was playing tricks with my hearing. Until, of course, the voice launched into this rather complicated story full of twists and turns that ended up throwing the two Uma’s together.

We got chatting, and I was delighted that I got a chance to speak and meet Uma Krishnaswami. The added bonus, her being a children’s author. So much more to share and discuss. 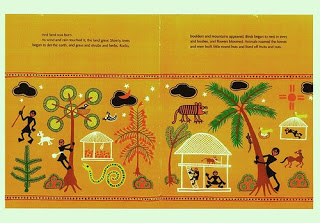 What about sharing the same name charms you?

Uma Krishnaswamy: Absolute fun. When Uma’s book got reviewed (minus her pic) I was asked (with a touch of reverence) if I’d taken to writing as well. Very tempting to add that to my resume as my namesake does such a fabulous job of it.

And as Uma mentioned, Cricket Magazine Group has sent my copies and cheque to her while I anxiously waited at the gate for the magazine!

And that irreverent little aside from the editors of Cicada, when I did the artwork for her poem, would never happen in the normal course.

Apart from the fun factor of having our names together, Uma’s poem that I got to illustrate was something that really struck a chord, as it speaks of the same place that I come from. More coincidences.

Hopefully, in the near future, the two of us will get to do a book together to drive a few more people crazy! 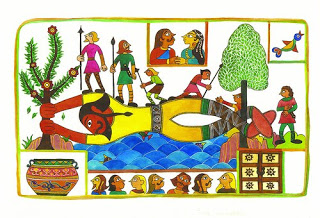