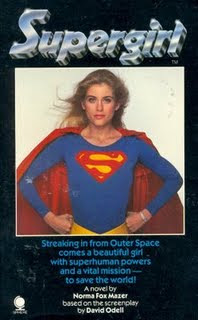 We first met in person when I joined the faculty of the Vermont College program in Writing for Children and Young Adults in July 2005.

I’ll admit to having been fairly starstruck by the entire group. After all, we’re talking about teaching with the likes of Kathi Appelt, Marion Dane Bauer, Margaret Bechard, Sharon Darrow, Louise Hawes, Ellen Howard, Rita Williams-Garcia, and Tim Wynne-Jones.

I’d packed only one book to be signed, a novelization of the movie “Supergirl” by Norma Fox Mazer (1984). An odd choice, I know. Of all the much acclaimed books by all of the award-winning faculty, Norma included.

But the book was special to me. One sunny day in the summer of 2000, I’d found the battered, used copy at Shakespeare & Company in Paris.

I’d first learned to read on superhero comics, Supergirl was one of my favorite heroes, and finding a Supergirl novel by Norma–and so far from home–was such a happy surprise.

She laughed when she saw the book and told me how she’d worked to add layers to Supergirl, no matter whether the editor expected to see them there or not. And we talked about how there’s nothing wrong with having to make a living as a writer, a challenge we’d both struggled with to varying degrees over the years.

I didn’t know Norma as well as I would’ve liked. She retired from teaching not long after I joined the faculty. But she made a particular effort to be welcoming. She brought me Kashi crackers when I wasn’t eating much of the cafeteria food, and we connected over our experiences as writer women whose husbands were authors, too.

I’m honored that I had the opportunity to known her, to have heard her laugh and read. To have discovered that she was more super than I could have ever imagined. 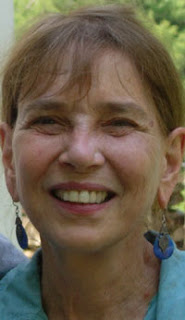 In Memory of Norma Fox Mazer by Elizabeth Bluemle from Shelf Talker: A Children’s Bookseller’s Blog. Peek: “Norma was ageless; her slight frame and whimsical braids, and her open, imaginative, curious and lively mind, gave her an air decades younger than her actual years. There was something magical about Norma; one felt happy to be around her.”

Celebrating Norma Fox Mazer by Liz Gallagher at Through the Tollbooth. Peek: “A teenage sensibility kept Norma ageless. The wisdom of years made her amazing.”

Norma Jean Fox: One of the Giants by Stephanie Greene from Through the Tollbooth. Peek: “She was one of the Giants. One of the Dependable Ones, as I think of them, who could be counted on to turn out strong and good and true books, year after year, without fanfare, without talk.”

Norma Fox Mazer 1931-2009 by Julie Larios from Jacket Knack. Peek: “When I think of her, it’s as if she stepped straight out of an illustration for a Beverly Cleary novel….”

In Memory of Norma Fox Mazer by Uma Krishnaswami from Writing with a Broken Tusk. Peek: “She was a beloved wife to Harry Mazer, a mother, and a shining light in our field, a dear friend and mentor to innumerable others on the writing path.”

A Letter to Norma Fox Mazer by Carrie Jones at Through the Tollbooth. Peek: “When I first saw you at Vermont College, Emily Wing Smith grabbed my arm and whispered frantically, ‘That’s Norma Fox Mazer.'” 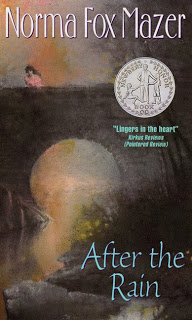 Norma and the New Life by Tami Lewis Brown at Through the Tollbooth. Peek: “In every life there are a tiny handful of people, maybe two or three, who genuinely touch your soul. Norma was one of mine.”

The Circle of Life by Teri Lesesne/Professor Nana at The Goddess of YA Literature. Peek: “Ever the caring person, Norma wrote a lovely thank you to me (I still have it) with cartoon characters talking about their conference experience.”

Remembering Norma from Bethany Hegedus from And Then: The Daily Dramas of a Children’s Writer. Peek: “Truth With a Capital T, is much changed from the picture book Norma and I worked on together but when it hits the shelves in fall 2010, it will bear a dedication to Norma, for without her encouragement the book wouldn’t be.”

Unsigned Copy: Norma Fox Mazer by Zu Vincent at Through the Tollbooth. Peek: “Norma was no prima donna, she was in the trenches, cutting her eye teeth on pulp work and growing into literature. To me that’s why her story danced with life, and why her success was so precious.”

Norma’s craft and her art by Helen Hemphill at Through the Tollbooth. Peek: “…go find a Norma Fox Mazer book at your local bookstore or library. Read it for fun. Then read it to learn. Norma has so much to teach us still.”

Norma by Deborah Wiles at One Pomegranate. Peek: “This is what Norma would tell me to do — write. Keep working. Try. I may be gone, but that is not an excuse for you not to do your job, not to meet your deadline. I know she is right. And I know I will find the words.”

What I Learned from Norma Fox Mazer by Sarah Aronson at Through the Tollbooth. Peek: “She taught us about honor and humility. Accepting your limitations. Not accepting them.”

Norma Fox Mazer by Sharon Darrow. Peek: “She lived lightly and carefully on the earth and gave so much back, bringing flowers and beautiful stories into our lives.”

Award-Winning Author Norma Fox Mazer Dies at 78 by Rocco Staino from School Library Journal. Peek: “Mazer’s books have won many awards, including a Newbery Honor, the Edgar Allen Poe Award, the Christopher Medal, the California Young Readers Medal, the Lewis Carroll Shelf Award twice, the Iowa Teen Award twice, and the ALAN Award. She was nominated for the National Book Award and the Los Angeles Book Prize, and her work often appeared on the American Library Association’s Best Books for Young Adults lists…”

The faculty members listed above taught during my first residency and are still at Vermont College. I recall additional, wonderful folks being there, too, but I don’t have a complete roster handy (or a reliable memory) and would rather not try to list everyone than to risk leaving anyone out.