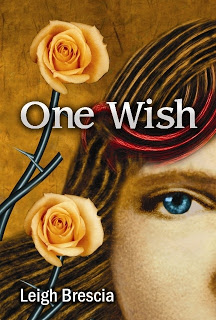 Leigh Brescia is the first-time author of One Wish (WestSide, 2009). From the promotional copy:

Overweight Wrenn Scott desperately wants to be popular and snag a hot boyfriend. Living with her single mom and younger sister, Karly, she lands a lead role in the high school musical, her voice for once overshadowing her weight. Pushing to get thinner by opening night, Wrenn’s waistline shrinks as she learns all the wrong ways to lose weight from a new “it-girl” friend in the show.

Meanwhile, her mom is falling for Phil, “a balding Channel 8 News-nerd”; her sister is wrapped up in her own share of middle school drama, and Wrenn’s best friend has fallen for a guy she met online—but hasn’t even seen yet! Topping it off, geeky stage manager Steven has a crush on her.

But Wrenn doesn’t want to be seen with him—she’s holding out for a trophy boyfriend whom everyone will envy. By opening night, the old Wrenn has almost disappeared. After a crisis reveals her weight-loss tricks, Wrenn realizes there are much more important things than being thin, popular, or even dating a hunk.

Considering that I wrote the first draft of One Wish in 2004, yes, I’m surprised that I’m debuting in 2009. I’d heard this crazy rumor about it taking five years from writing the manuscript to see the fruits of my labor, but I didn’t realize it was actually true! Had I known, well, I hope I still would have persevered.

I began to query agents with my manuscript in May of 2004, and I signed a contract in the winter of 2005. My agent started shopping One Wish around, and in 2007, the people at a new publishing imprint, WestSide Books, said they were interested in using it for their launch line in the spring of 2008.

Things took a bit longer than expected, and the launch was pushed back to spring 2009. It was such a hard day for me when I learned I would have to wait another year before I would see my book on store shelves, but now I can honestly say it was for the best.

Because my pub date was pushed back, I was able to join the 2009 Debutantes on LiveJournal. As writers we tend to lead semi-solitary lives, and it’s so wonderful to be able to sign in online and talk to authors who are at the same stage in the process as I am.

If I have any kind of question (whether it’s writing, publishing, or marketing-related), I know exactly where to go for answers. If I’m frustrated, they send me hugs and virtual chocolate, and if I have good news they celebrate with me. I’ve learned so much from them, and have come to depend on their insights and advice. Now I wonder how I even handled writing-related stresses before I knew them!

As a writer, the best thing to do is just hang in there; take things day by day. There are great moments, and there are pathetic moments. I’m a firm believer in a master plan. Even though I might not understand the timing, it’s for a greater purpose.

Yes, I had to wait an extra year to be a “published” author, but I discovered some of the best writer friends ever in the process. Sit back, relax, and keep pushing forward. Each day will bring you closer to your dream. There’s always the possibility that you will be the exception to the rule!

Without a doubt, in order to find Wrenn’s voice, I freed my inner adolescent. Many things that Wrenn said or thought in One Wish could have come almost verbatim from my diaries when I was her age. Wrenn’s story isn’t “mine” and One Wish isn’t autobiographical, but it could have been. When asked why she liked Wrenn as a character, one of my readers said: “because she could be me.” And it’s true: she is “everygirl.”

I really tried to tap into the insecurities of the average teen girl when I was writing this book. Women in particular are bombarded at all angles: we see these images of actresses and models with body types and physical features that are nearly unattainable, and yet we’re supposed to look like them, act like them, and be them. It’s discouraging, because it’s not possible. The idea that inner beauty is the most important kind of beauty is a message that I’ll never get tired of hearing and trying to pass on.

The truth is that I relate to many of my first-person protagonists. It seems that bits and pieces of their stories are my story. Sometimes without even thinking I’ll throw something into a novel and think: “Wait. That happened to me!” or “That’s exactly how I felt!”

Though times are changing, the foundation of the teen experience generally stays the same: there are first loves, first dates, first cars, friend issues, parent issues, proms/dances, broken hearts, mistakes, decisions… The possibilities are endless but the core group of issues is the same as it was ten, twenty, and even fifty years ago.

Chances are, if I sit back and reflect on my own experiences as a teen, someone out there can relate. The good part is, being on the other side of those experiences, I can offer a bit of insight and advice from what I learned along the way. Ultimately, I would love for girls to better understand themselves after having read my stories.