Learn about Paula Chase-Hyman. You can also find her at The Brown Bookshelf: United in Story, which is “designed to push awareness of the myriad of African American voices writing for young readers.”

Before my book sold to Kensington, the answer to this question would have been very different. I used to think of success in terms of books sold, readers gained. I mean, how can you not?

When a publisher buys your book, they’re buying it because they believe it can sell. So it’s only natural, to some degree, that authors link our success to our book’s sales record, good reviews, and buzz. And many of us socialize in online communities where the issues of marketing and promotion are constant worries. We pick them apart and try to find a formula that even the publishing Powers That Be haven’t found.

Five books later and many lessons learned, I feel very differently about artistic success. No doubt, I still want to sell books.

I’ve met people along the way who believe that writing “for money” taints the art of writing. While that’s an extreme way to look at it, it’s not totally untrue. The business of writing definitely impacts the artistry of writing.

However artistic success, for me, is when you don’t let it. It’s being able to create without my mind to the industry. That’s not the easiest thing to do, but I believe when you create under those circumstances you’re much more likely to produce your best work. Listening to the voices of your character and letting them, and only them, direct you produces the purest, most organic work.

Let the marketing team market, the publicist promote. They’ll figure out how to sell your book. Our job is simply to create. And if you do, that’s artistic success.

I chose to answer this question because, by doing so, maybe I’ll understand it better myself.

Every author has their cross to bear when it comes to promotion. But I’m willing to risk the lashing by adult fic authors to say this: the hardest working authors out there when it comes to reaching their audience has got to be YA authors. And I’m not just saying that because I’m a YA author. It’s the stone-cold truth.

Real quickly, let’s go over the hurdles YA authors have to jump simply to reach readers:

1) The fact that most readers read “up” means our target audience has either moved on or is about to move on to adult fiction. So we’ve got to work double hard to show we’re not talking down to them.

2) We must appeal to both teen readers and the adult gatekeepers who serve as a recommendation resource to teen readers.

3) Awareness of where they live is tough. Sure, they live on the Web. But teen readers are savvy. They’re as likely to ignore a banner ad promo about a book as an adult reader is to pass by a weight loss ad or [insert any other product being sold online]. And infiltrating their social networks exclusively to promote your book is a huge no-no.

I’m not saying adult fic authors don’t experience challenges. Recall I said every author has some sort of promotional cross to bear. What I’m saying is, the promo process with teen readers is a delicate process.

Alright, alright. You’re saying, “well, what the heck is the process?!”

Here’s the secret… ready? I connect my books to young readers by making sure the books showcase them in a realistic light. Ta-da!

In the end, it always comes back to the writing. Always.

For all the effort I put into promoting my books, that effort is all about making sure the reader knows they’re there. My promotion has never been about how good or great the books are, what awards they’ve received or accolades. I stick with strict “here are my books” awareness campaigns because I’ve found that once a young reader knows about my books, they enjoy them.

Every time a reader writes to me and says they connected to this character or that, I consider it a nod to my un-process process.

To be fair, though, specifics on how I promote my books: I put most of my promo eggs into my website and networking with other YA authors and lovers of YA lit. I encourage them to share my books with teen readers and others who love teen fiction. It works for me, despite it being a more indirect approach. 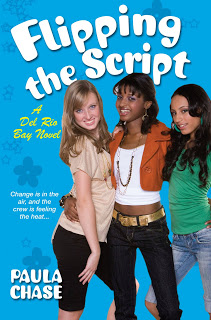 Flipping The Script (March 2009), is the fifth and final book in my Del Rio Bay series. I tackled this book as if it were my last, all the while hoping I’d be optioned for one more so I could take the clique into their senior year. However, the option wasn’t to be. So Flipping The Script has a melancholy feel to it that left both me, and many readers who have reached out to me, sad.

The characters are juniors, and they’re 180 degrees different from when we met them as freshman in So Not The Drama (2007). That’s what I love the most. That you can see the growth in all of them. Yet for the JZ character, perhaps not enough growth. Flipping The Script deals with the complexity of long-distance dating, trust issues, and homophobia.

While it’s not necessarily how I wanted to leave the clique, it’s also a very realistic ending where friendships and relationships are concerned. And realism is what I strove for throughout the series.

Despite my pretty-in-pink covers, my goal was always to have the pages between those covers chock full of real teen experiences. And I’m confident I met that goal. It was sad ending the series, yet very satisfying.