You last visited Cynsations in January 2006 to discuss the release of Nothing But the Truth (and a few white lies)(Little, Brown, 2006). Do you have any more recent news to share on that novel or your other books?

I was so thrilled that Nothing But the Truth (and a few white lies) (Little, Brown, 2006) won the Asian Pacific American Award for Literature in 2007, and then it was listed as an ALA Popular Paperback.

How about any other new developments?

Girl Overboard (Little, Brown, 2008) is now available in paperback and was selected as a Junior Library Guild Premier Selection.

North of Beautiful has received three starred reviews. I’m super excited and touched by the reception the book is getting from reviewers, bloggers, and most of all readers.

Congratulations on the release of North of Beautiful (Little, Brown, 2009)! Could you tell us a little about the novel?

North of Beautiful is my very humble homage to my favorite poem, Maya Angelou‘s “Phenomenal Woman.” (In fact, I made a video homage to that effect)[see below].

I’ve wanted to write an ode to true beauty for girls and women–this is it!

Meet Terra who is everyone’s idea of a dream girl with her long, blonde hair and a body models would die for. Who notices any of that when there’s a palm-sized birthmark on her face?

As a woman, writer, and mother, I’ve wanted to tackle our society’s super-narrow definition of beauty. You know, a friend just mentioned Kate Winslet‘s weight loss and how sad it was since she looked like any other starlet now. It’s true!

But how do you translate that sentiment into a novel? I wasn’t sure what my entry point would or should be.

It wasn’t until I was telling an acquaintance of mine what a great mothering job she was doing with her son: Mr. Cool and Popular at school…who was also born with a port wine stain on his cheek.

She stopped me mid-accolade and said, “That’s because he’s a boy.”

With that one comment, the story was born and Terra sprang to life in my imagination like Athena from Zeus. 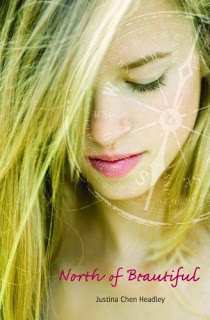 Each novel has taken progressively longer to write–from four months to 12 months to 18 months. For a while, I attributed the lengthening timeline to aging brain cells, but now I chalk it up to juggling multiple projects.

As working writers know, you’re essentially writing one book, copy editing another, and then touring for the last. I took a small break after writing North of Beautiful since three novels in three years was a bit taxing for me, but now I’ve got two different novels going. The madness is beginning again!

North of Beautiful required an insane amount of research. I knew nothing about cartography, and the more I immersed myself in the history of map-making, the culture of those adventurer-scientists who made maps in the past, the technology in today’s mapping, I knew that I had found the framework for the story.

Then, of course, while I create collages for every book that I write, I’m not a trained artist. So I had to learn all about that world, too!

And finally, there was a ton of in situ research, entailing travel to China.

What do you want YA readers to take away from your story?

I consider my first three novels as a complete arc in teens getting comfortable with their own identity–accepting themselves, defining themselves, loving themselves. Think about it: we get judged for our outward appearances, whether it’s racial identity, socioeconomics, or our physical appearance.

My stories–all three–are about moving beyond those initial, knee-jerk assessments, those damning and often inaccurate first impressions.

Do you have a vision for your career as an author or take it book-to-book or both?

I definitely have a vision for my career. I want to write books that matter, and at the same time, I want to empower my readers to use their words to create change that matters.

So I will always tie some kind of community service that helps teens to all of my work–whether it’s a college scholarship, a challenge grant, or a video essay contest.

I think my community service work with teens is the most authentic expression of how much I adore, esteem, and respect this group of readers.

It’s my hope that endeavors, such as my Find Beauty Challenge in honor of North of Beautiful, give teens a way to express themselves based on what they’ve read in my work. In this challenge, I’m asking people to tell the world in 90 seconds what True Beauty means to them. I’m donating $10 for every uploaded video (up to $1,000) to fund reconstructive surgery on kids with cleft lips in third world countries. Plus, the winning video essay gets in iPod Touch. The videos that have been made so far are phenomenal.

Do you work with a critique group, a partner, or exclusively with your editor?

I trade full or partial manuscripts with some very trusted writers, among them Janet Lee Carey, Lorie Ann Grover, and Holly Cupala. They are my first readers, and then I share my revised work with my agent, Steven Malk. Steve has such an incredible sense of what needs help in my manuscripts and he’s not afraid to tell me. I love that. After I get his notes back, I revise again and only then does it go to my editor.

Alvina Ling, my editor, and Connie Hsu, her assistant editor, make a formidable, astute, and beautiful editing team. I trust and value them.

I am absolutely besotted with Beth Kephart‘s books. I was supposed to speak with her on a panel at NCTE earlier this year, but personal circumstances prevented that from happening.

My amazing library marketer at Little, Brown Books sent me a copy of Beth’s Undercover (HarperCollins, 2007), and I was profoundly moved by this writer’s supple and lyrical language. She is an author who needs to be read much more widely.