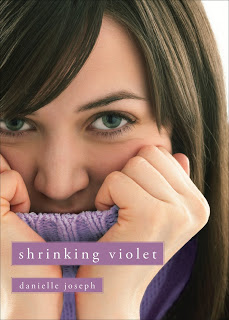 Danielle Joseph is the first-time author of Shrinking Violet (MTV/Pocket Books, 2009). From the promotional copy:

High school senior Teresa Adams is so painfully shy that she dreads speaking to anyone in the hallways or getting called on in class.

But in the privacy of her bedroom with her iPod in hand, she rocks out—doing mock broadcasts for Miami’s hottest FM radio station, which happens to be owned by her stepfather. When a slot opens up at The SLAM, Tere surprises herself by blossoming behind the mike into confident, sexy Sweet T—and to everyone’s shock, she’s a hit! Even Gavin, the only guy in school who she dares to talk to, raves about the mysterious DJ’s awesome taste in music.

Like many writers, I dreamed of getting “the call” for a few years. Would I be home when my agent called? If not, would she try my cell? Would it come when my kids were in the middle of an argument or would they be quietly playing and then the sound of the glorious phone would break the silence?

When I actually got an offer on Shrinking Violet I couldn’t have been farther away from my home in Florida. I was visiting my sick grandmother in Cape Town, South Africa. I randomly checked my email one day, and there it was. But since I had been waiting for the actual call for so long, I decided to phone my agent the next day.

So basically, I was the one that made “the call,” and it was a wonderful feeling! I celebrated by going to the beach with my family, and my sons made me a “book cake” in the sand!

And the best thing was that my grandmother, an avid reader, lived long enough to hear that my book would be coming out the following year.

In college, I studied creative writing and immediately felt at home in my children’s writing class. I just started writing in the voice of a teen without really giving it much thought. It felt very natural to me.

I am the oldest of five siblings (my youngest sister is now a senior in high school), so I really haven’t totally left that world yet. I like to watch teen movies, listen to a lot of the same music as my youngest sister, and have not graduated to “old lady” clothing yet! I have many memories from my teen years, and we go through so much as adolescents that I’m constantly pulling stories and situations out of that “memory box.”

For people that are trying to find their “teen voice” I would suggest that they talk and listen to teens—go to high schools, the mall, even listen to how they interact with each other at Starbucks or other local hangouts. Writers can also watch TV shows that feature teen characters, read teen magazines, and of course, read a lot of YA!

The biggest mistake people make is forcing teen lingo on their character, but what makes an authentic teen voice is not only what you say, but how you say it.

Teens have different fears, goals, and ways of going about things than adults do, and that is what a writer has to tap into in order to make a believable teen character.