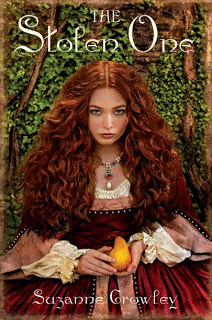 You last visited Cynsations in July 2008 to discuss your debut novel, The Very Ordered Existence of Merilee Marvelous (Greenwillow, 2007). Welcome back, and congratulations on your 2009 release, The Stolen One (Greenwillow)! In your own words, could you tell us briefly what the book is about?

The Stolen One is about willful, fiery-headed Katherine (Kat) Bab trying to find her place in the world and who she really is.

When her foster mother Grace Bab dies, Kat flees to London and after a chance encounter with the queen, Elizabeth gets invited to court.

As Kat works on embroidering a special gown for the queen, rumors begin to swirl that she is her secret daughter.

The Stolen One is full of mystery, intrigue, and lush period detail, but is ultimately, I hope, a memorable, compelling love story.

I grew up with the family legend that we are distantly related to the family of Lady Jane Grey, the tragic queen of nine days. As a little girl with a vivid imagination, I was very intrigued with this.

After a visit as a teenager to England, particularly Hampton Court and the Tower of London, I began reading any books on the Tudor era as I could. I came across an intriguing nugget of history in my reading that never accounted for more than a sentence or two, but it was enough to plant a seed. And I knew it would make a wonderful story someday.

As soon as my agent signed me up four years ago, I told her about it. I can’t give away what it is without spoiling the ending though!

I knew I had the deadline of Dec. 1, 2007 to turn in the first draft of The Stolen One, but didn’t start writing it until Sept. 1 (four months before)!

My first book came out August 27, 2007; and as all writers know, you are kept busy with the book almost till the last second, and I went on a four-city pre-publication tour too.

So as soon as my kids went back to school, I sat down to write just a few days after Merilee debuted. Very scary. Very, very, scary. I knew what I was going to write about and I knew how it was going to end, but there is nothing like a blank computer screen staring at you.

My editor, Virginia Duncan, said just start – write something. So I wrote the first paragraph (now the second in the finished book) and emailed it to her.

A few minutes later on her way home on the train, she emailed back that she loved it and to keep on going. She has such a gentle touch and knows how to keep a writer calm and centered.

I’d write twenty pages or so and send it to her and she always responded with great enthusiasm And if she hadn’t heard from me in a week or so, she’d nudge me. And that’s how I did it under the pressure, page by page.

In terms of research, luckily I’d already read dozens of books on the era through the years, and in the months leading up to writing the book. And I collected even more while I was writing the first draft, some obscure ones, including a book of folklore on the area in the country where we first find Kat. 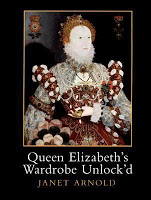 Books would arrive daily as I was writing. That’s the good thing about revisions, you can always add telling and visual detail later.

I particularly drew great inspiration from Janet Arnold’s book Queen Elizabeth’s Wardrobe Unlocke’d which I had to pay $200 for from England! And I must say I put on some weight–I always had a bag of M & M’s (or any other chocolate) close by to fortify myself!

So far, what have you learned about yourself and your writing-and-publishing life?

My naive little self thought the finish line was getting my first book published. Little did I know what it takes to get your book out there and people talking about it.

I’m a shy, creative, homebody and I’ve had to learn how to push myself to network online, at conferences, school visits etc, when I’d rather be writing. But overall, it’s made me more confident as a writer and added so much richness to my life with so many new friends.

I’m not sure if it’s because YA writers have much more of an online presence, or if the importance of being online has become more important in the last couple of years since my first book came out, but I definitely am spending more time on the computer trying to reach out to readers. I heard somewhere that most teenagers who buy books have read about it online.

So I’m on Facebook, MySpace, Jacketflap, LiveJournal, and Goodreads now. I’ve yet to do Twitter, I guess that’s next.

Luckily, I have a teenager in the house as a built in sounding board. She helped me with my MySpace page and can tell me what’s cool and definitely what’s uncool! My book has been selected as a Seventeen magazine summer read, and I think I have finally impressed her. That and the time I rode up the elevator with Laurie Halse Anderson at a conference!

This was not something I worried about until The Stolen One. I’m now realizing how different the two genres are that I have written for although there is some bridging as kids read up and down. I’ve thought about whether I’ll go with the genre in which my books are the most successful, but ultimately, I think I’ll have to follow my heart and write what I’m most passionate about–whether it is middle grade or YA.

Gosh, that’s a hard one. There have been so many excellent reads, but I have to say The Forest of Hands and Teeth by Carrie Ryan (Delacorte, 2009). She somehow was able to combine zombies and romance in such a way I couldn’t put the book down!

I also need to put a shout out to Silver Phoenix: Beyond The Kingdom of Xia by Cindy Pon and Soul Enchilada by David Macinnis Gill, fellow Greenwillowites. Both fresh, highly unusual reads.

I’m working on two ideas–another Texas book, and another historical–this one set in Venice in the eighteenth century. We’ll have to see which one wins out!