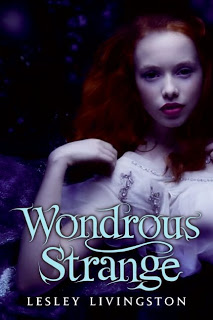 Lesley Livingston on Lesley Livingston: “I am a writer and actor living in Toronto, Canada. I hold a master’s degree in English, with a specialization in Arthurian literature and Shakespeare from the University of Toronto.

“As a principal performer and founding member of the Tempest Theatre Group, I have the good fortune to be able to bring Shakespearean classics to life in productions and workshops for high school students across southern Ontario.

“Wondrous Strange is my debut novel, the first in a trilogy.”

Voracious. I would read anytime, anywhere. I would read toothpaste tubes if there was nothing else available. I would read walking home from school. I used to keep novels open surreptitiously in my desk while I was supposed to be studying math (there may possibly be a correlation between this and my present-day dreadful lack of math skills…). When I was very young, I used to read under the covers with a flashlight after bedtime.

None of these habits have really changed with the passage of time. Except I don’t have to use a flashlight anymore (unless I want to!).

Having performed for teens for years before I actually started writing for them, I can tell you from experience that they are the both the scariest and the best audiences possible. Because they are never neutral. They love something or they hate it, and they are, in my experience, not shy about letting you know which it is. So if you can get them–truly get them–it is the best. thing. ever. That’s one of the reasons.

The other is that it is just–plain and simple–a pure joy. For teens, a lot of what they experience, they do so with fresh eyes and remarkable passion.

It is, in that sense, enormously freeing and so much fun to write, because I get to throw myself into those never-before-worn shoes and experience that same rush of emotion that my characters and, hopefully, my readers do.

A lot of it is the freshness I mentioned above–and the capacity for undiluted passion. That sense of purpose with which you can imbue a younger person whereas an older character carries the baggage of experience that sometimes dulls that impetus. And you can still wrap it all up in the fears and freak-outs and insecurities that come with being a teen.

Wondrous Strange came about as a sprint after a long-distance haul, actually. My first (unpublished) book took years to write. I came close to getting an agent more than once for it but, alas, it was not to be. Then I wrote a second book which took substantially less time, and I hooked a fantastic agent for that one. Huzzah, right? Well, not quite. That one hasn’t sold either (yet). But… here’s where it gets interesting.

I went to New York to meet my agent, the fantastic Jessica Regel, face to face. I went with another author friend of mine, who was meeting her publisher for the first time.

Both of us were wowed by the city as a whole, but I was absolutely captivated by Central Park. Even in February. We did the touristy stuff on that trip–carriage ride, Tavern on the Green (both of which are now plot points in Wondrous Strange!)–but it was on my next trip that I really got to wander around the Park with some New Yorker friends. We spent hours there, night and day, and I started to get ideas. Ideas about things in the Park that the average park-goer doesn’t get to experience. Magical things.

I was also performing Shakespeare, and had already written a short story about an actress in a production of “A Midsummer Night’s Dream.”

Well, those two disparate elements–the Bard and the Park–came together in a flash of inspiration prompted by an off-hand comment from my boyfriend John (bless him!). And Sonny and Kelley and Co. presented themselves to me, en masse and emphatically.

Fortuitously, according to Jessica, it was just the kind of thing that HarperCollins editor Laura Arnold was looking for. Jessica got in touch, and Laura asked me to write an outline for the story. We had many fantastic conversations. There was back-and-forth, sample chapters and synopsis-writing, and apparently the whole thing went over pretty well, because, based on the first five chapters and an eight-page synopsis, HarperCollins made me an offer for two books (which then became three books)! And there was much rejoicing!

Laura is now my editor, and I simply cannot say enough good things about her.

I don’t think there’s anything I could have done differently. I think that the way things have worked out for me so far, I’m exactly where I’m supposed to be.

You know… I suppose, for the question previous to this one, I could have said “I wish I hadn’t taken so freaking long to write my first book” (the one that failed to land me an agent)…but, conversely, I truly believe that the process I went through and the things I learned while writing and re-writing (and re-writing) that book was what taught me the craft. From the ground up.

Congratulations on your debut novel, Wondrous Strange (HarperCollins, 2008)! Could you tell us about the book?

Here’s what it says on my website (it pretty much gives you the gist!):

Kelley Winslow is living her dream. Seventeen years old, she has moved to New York City and started work with a theatre company. Sure, she’s an understudy for the Avalon Players, a third-tier repertory company so far off-Broadway it might as well be in Hoboken, but things are looking up—the lead has broken her ankle and Kelley’s about to step into the role of Titania the Fairy Queen in Shakespeare’s A Midsummer Night’s Dream. Faeries are far more real than Kelley thinks, though, and a chance encounter in Central Park with a handsome young man will plunge her into an adventure she could never have imagined.

For Sonny Flannery, one of the Janus Guards charged by Auberon, the King of Winter, with watching over the gate into the lands of Faerie that lies within Central Park, the pretty young actress presents an enigma. Strong and willful, she sparks against his senses like a firecracker and he can’t get her out of his mind. As Hallowe’en approaches and the Samhain Gate opens, Sonny and Kelley find themselves drawn to each other—and into a terrible plot that could spell disaster for both New York and Faerie alike.

Well, I mentioned Shakespeare and Central Park above, but it really was the Park that was the first and foremost inspiration. Once I got home from that first trip, I started to do some research on the history of the place and I discovered all these immensely cool factoids about the Park, about one of its founders, and about the Carousel and some of the landmarks, all of which started percolating around the story that I had yet to write.

Since that time–it seems like a very short while ago–I have been back to the Park several times and have busily populated it with beings from the Otherworld. Do be careful where you walk!–not all of them are friendly…

There was a degree of research involved, especially with respect to the Park and getting it right. It’s such a huge place and, even though my story mostly centres on a small portion of the Park, it was important to get it right.

Same thing with Faerie lore. There’s an awful lot of it and, depending on whose telling the tale, the details don’t always agree. Which is fine–I was free to choose interpretations, which I liked–but I had to know where they came from and why they worked for me, and I had to avoid inconsistencies.

My Shakespeare, on the other hand, I had down pretty much cold!

How much fun it really is. How nerve-wracking it really is, even after (sometimes especially after) you get the contract. How utterly passionate the people who work in this industry are about the books they make and sell. It’s all very gratifying and more than a little bit humbling.

Big picture? Monster roller coaster. Terrifying, thrilling, unexpected and worth every single second of the metaphorical three-hour lineup to get there.

And I’m still not sure it’s quite sunk in yet!

Thanks to sites like yours, actually, it has become so much easier to reach such a wide audience (thank you!). Signings and events are lovely and useful but, especially for a debut author, to be able to reach readers through interviews and chat sessions like this is really marvelous. And when those readers touch base with you through MySpace or Facebook or wherever–it’s so great to be able to reach back.

Ha! I’m not what you would call the most balanced person, anyway, but I do try! And I’ve learned that you really do have to budget your time.

It is so much fun interacting online or doing school visits or cons, but you have to be so mindful that–in the busyness of being an author–you cannot forget that, first and foremost, your duty is to the page.

There are times when I go radio-silent online, and my friend requests pile up and my status updates go stale and a tumble-weed rolls through my blog… That’s when you can tell that I’m probably neck-deep in the story.

Exclusively with my editor. I’m one of those people that needs to see the story through in my own head before I start getting outside input. And Laura’s input is fantastic.

Read. Read everything. Through sheer osmosis you will pick up on cadence and structure and pacing and all that good stuff. Read. Aside from that? The best writing advice I ever received was–write.

I’m not being facetious. Guy Gavriel Kay told me that when I was an aspiring writer. And I know that aspiring writers have all heard that one before, but it’s true. You can’t edit a page full of nothing. And you can’t call yourself a writer unless you write. Write. Keep writing.

I’m an actor. I frequently perform with a Shakespearean theatre company called Tempest Theatre Group. In summer, I inadvertently terrorize the plants in my garden. I have three cats.

I’m presently doing the copy-edits for the next book in the series (it’s a trilogy), and it should be on the shelves late this year! Both books two and three are the direct continuation of Sonny and Kelley’s story. All the old familiar faces are back, plus one or two new ones. I had such a blast writing this latest book. I can’t wait to find out what my readers think!