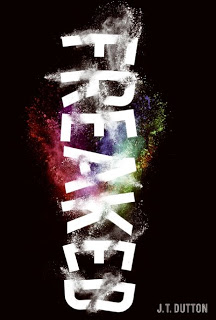 J.T. Dutton is the first-time author of Freaked (Harper, 2009). From the promotional copy:
At a grateful dead concert you need: Acid: two windowpanes taped to chest
Checked Tape deck for recording shows
Checked Wad of cash
Checked PB&J sandwiches for the munchies
Missing Tickets to the show
Missing .45 handgun
What? Scotty Loveletter is in big trouble. He’s about to be expelled from school, but all he cares about is getting to Freedom to see Jerry Garcia—even though he doesn’t have tickets. But if dedicating his life to Jerryism has taught him anything, Scotty knows he’s got to keep on trucking and smile, smile, smile. In a stunning debut novel, J. T. Dutton crafts a brilliant story about an unforgettable teen finding himself in the music of one of the world’s most beloved bands. In writing your story, did you ever find yourself concerned with how to best approach “edgy” behavior on the part of your characters? If so, what were your thoughts, and what did you conclude? Why do you think your decision was the right one?

Both Freaked (Harper, 2009) and my second Stranded (Harper, TBA) plunge into pretty dark territory. Freaked deals aggressively with drugs, Stranded with sex. Both stories are told from the point of view of a teen deeply immersed in self-destructive behavior.

I wouldn’t want my own kids doing what my protagonists do, but both stories are, in my opinion, “true.” We’d like the world to be better than it is, but kids struggle with hard things and are sometimes forced to grow up sooner rather than later.

I try to be honest about what kind of temptation both maturity and immaturity entail–why sugarcoat? Why lie?

As someone with a MFA in Writing, how did your education help you advance in your craft? What advice do you have for other MFA students/graduates in making the transition between school and publishing as a business?

There are programs out there who do a much better job of teaching the publishing “tricks of the trade” than my MFA program did; and yet, I received three important things from my MFA. I made a lot of writer friends whose work and talent influenced mine. I read books and studied theory with successful faculty who taught me to “read” as a writer. I learned to teach and my academic career dovetails nicely with my writing career.

But here’s the kicker: my classmates 10 years later have produced an exceptionally large percentage of award-winning books even without guidance about how to find an agent, etc. So really, at least in my case, just having a place to study and be for a while helped.