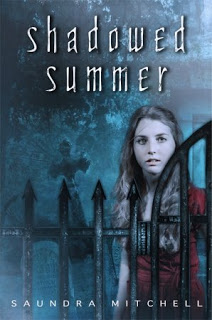 Saundra Mitchell on Saundra Mitchell: “I’ve been a phone psychic, a car salesperson, a denture-deliverer and a layout waxer. Now that I’m an author and screenwriter, I’m happy that I’ve finally found my calling.”

Voracious. Cereal boxes, newspapers, toothpaste tubes, comics, books, equipment manuals, if it had words on it, I wanted to read it. To this day, I can tell you that Crest is a clinically approved dentifrice and you don’t get ice cream at Dairy Queen–you get quiescently frozen dairy treats.

My mother claims she took Kathleen Windsor‘s Forever Amber (MacMillan, 1944) away from me when I was four or five. Shortly after that, she introduced me to the library. (And probably specifically the juvenile section!)

That’s just what comes out! When I wrote Shadowed Summer, I thought I was writing for an adult mainstream audience. Rachel, one of my beta readers, finished it and said, “This is a young adult novel!” And my response was, “Really?”

I don’t know why I was surprised; YA and MG are the only fiction I read, and I set out to write a book that made me feel giddy and destroyed and overwhelmed like The Silver Kiss by Annette Curtis Klause (Laurel Leaf, 1990)(author interview) did when I was 17. Sometimes, you’re the last one to know yourself.

I joke with my friends that I like to blow stuff up, but in a way that’s true. I like to see how things can explode and what happens when they do. And that works best with teen protagonists. I mean, think about it.

If Romeo and Juliet were 30, they wouldn’t be tragic–they’d be pathetic.

I’ve had a slightly weird path, in that I’d been a screenwriter for fifteen years before publishing my first novel. So I never know whether to include that path with this one. For example, if I hadn’t been a little burned out on film, I never would have written a novel at all.

But I wrote my very first script because someone read one of my short stories and asked if I could adapt it. (I said yes, then spent the weekend learning how to write scripts.)

So, they’re completely tangled, but completely unrelated. Do the hitches and stumbles trying to secure representation in LA really reflect on the challenge of finding a literary agent? I’m not sure.

I’ve had a really exciting and rich career in short film. More than three hundred productions, a hundred and fifty festival selections, and 10 trips up to Academy Award eligibility. (No nominations… yet!) Even though I’ve worked on the periphery of Hollywood instead of fully in it, I’ve met amazing people and learned so much.

But films aren’t yours in the same way that novels are; they’re a collaborative art form. The director decides what the eye sees; the actor decides the tone of voice, the motion of their hands. The editor decides the pace and rhythm of the story.

Yes, absolutely, in fiction, you have your agent, and your editor, and the copyeditors, all working together to make a novel as good as it can possibly be, but in the end, that book is your book. The characters say what you want, the way you want. The picture in the window is yours.

And I wanted a taste of that after spending a long, long, long time of handing my words to the next person down the line and letting go. As publication paths go, I know I’m actually very, very lucky.

I wrote my second novel and got my first agent within the same year. My climb to publication is actually pretty fast, if I isolate fiction from screenwriting. But if I don’t, it’s been a long career full of all kinds of stumbles and sprints that don’t finish with my book being published.

My friend Kurtis Scaletta talked recently about the difficulties of describing a career in writing as a “path.” This is exactly the sort of question he had in mind!

I wish I had realized what I was doing when I was younger. I feel like I’m getting a very late start compared to so many amazing authors.

I mean, Jessica Burkhart is twenty-two, a total sweetheart, and she’s got the whole Canterwood Crest Series (Scholastic, 2009) on shelves and in hands already. I definitely feel like I’m trying to catch up!

Congratulations on Shadowed Summer (Delacorte, 2009)(excerpt)! Could you tell us a little about the novel?

Thank you so much! Shadowed Summer (Delacorte, 2009) is a southern gothic ghost story, about Iris Rhame’s fourteenth summer in dying, backwater Ondine, Louisiana.

Just when Iris and her best friend Collette are about to give up their childhood games of pretending magic and conjuring magic, a real ghost whispers in Iris’s ear–“Where y’at?”

And with that whisper, Iris, Collette, and Collette’s first boyfriend, end up immersing themselves in mystery of a teen who disappeared decades ago. But what they discover is that in a town as small as Ondine, every secret is a family secret.

Initially, I had the main character, Iris show up in my head. She didn’t come with a story. She didn’t seem to want anything. She loomed there, silently waiting–for what, I had no idea.

Finally, I decided I would write a supernatural love story, and that’s when Iris intervened. She wasn’t interested in falling in love–with the living, or the dead. So I still had a character, and some of her friends but no idea what to do with them.

Around that time, I got news that one of my best friends from high school had taken his own life. Which stirred up embers of thoughts I had mostly let cool after my brother’s suicide when we were teens.

It was a shock, both times, because it’s a terrible, final reminder that we can’t really know anyone.

So Iris settled down with me to think about that–to roll that idea over with me: we don’t know what other people contain. And that means no one else will ever know what we contain, either.

That’s where Shadowed Summer came from.

I wrote the first draft of Shadowed Summer in the summer of 2003. I submitted it to the Delacorte Press YA prize that year, and landed my first agent with it. I didn’t win (or even place!), and over a year and a half my agent and I revised with a publisher interested enough to give notes, but not interested enough to make an offer.

Eventually, the editor asked if maybe my main character could be crazy instead of haunted, and I withdrew it from consideration. I eventually parted company with my first agent as well, I think in 2006?

I waited six months and started my agent search anew…with exactly one query. I was ready to give up! But I told myself, I should try one more time–fully expecting to give myself an easy out! Luckily for me, the one agent I queried–Sara Crowe–took me on. Three months later, in January 2007, she sold Shadowed Summer to Delacorte Press. (I guess it was destiny!)

Then, the first thing I had to ask my brand new editor was- “Will it be okay if we don’t start revising until July?” My part in the film programs for which I work devours every second of time I have from February ’til June, when I hand the scripts off to production. She was totally understanding, which was such a relief!

We revised from July until November in 2007, and then I saw my copyedits and FPPs in the spring of 2008. My book will finally be on shelves February 10, 2009! My daughter was barely a year old when I started this novel. She starts second grade in the fall!

This is my first novel, and so far, I’m overwhelmed. Trying to figure out the rhythm of the waiting–between edits, or between sales–that’s tripped me up a couple of times. And since it’s my first, I feel like I should do everything people ask me to, to promote it.

I’m not a relaxed anticipater–if something is going to happen, I’m wound up until it actually happens. I’m still adjusting to an industry where “soon” can be measured in months. And I’m not really chill about getting things done at a leisurely pace. If I have an interview, or a revision, I have to bang on it until it is done.

I think I’m getting better, though! I actually said “no” to some things this week, I let some questionnaires wait overnight, and I’m starting to get the hang of ignoring submissions and potential news so I can get back to work.

So I figure, at this rate, I will be Publishing Zen… soon.

Terrifying! This whole debut thing is scary anyway, right? I had no idea that three-revision passes were normal. I didn’t even know what FPPs were, or that I would see them! Copyedit symbols, ARCs, whether an ARC is a galley… there’s so much to learn, punctuated by long periods of time where everyone’s too busy working to talk to you.

So it’s already nerve wracking, and then late in the year, some houses quit acquiring new books. Then other houses started laying people off, erasing entire divisions–so many friends lost their editors in November and December! (I feel so lucky that I wasn’t one of them!)

Which means, of course, people have to start talking about how the Newbery is no longer relevant and the returns policy has to change or it’s all over and publishing might be dead anyway because of the Kindle.

Then, to top it off, came the news that all books without third-party lead-free certification might be pulled from shelves on February 10th–the same day I’m supposed to debut.

Talk about a relaxing and exciting entrance into the world of publishing!

I’m a screenwriter, and now an executive producer with the teen film series Fresh Films and Girls in the Director’s Chair. We teach talented teen all over the U.S. how to produce a movie, and then we give them the equipment and the support they need to do it!

I used to write all the screenplays based on teen-submitted ideas, but now I run the Emerging Screenwriters program. Under my instruction, nine teens revise, refine and sometimes write brand new scripts until they’re ready for production.

And, it’s not wicked exciting or anything, but I do a lot of corporate and and content writing on the side. I draft letters, or newsletter copy, or…basically, anything people want written, I can write it for them! The words are an addiction for me, what can I say?

Novel-wise, we’re still working on what my next book should be. But I’ll definitely be spearheading the next season of Emerging Screenwriters with Fresh Films and Girls in the Director’s Chair.