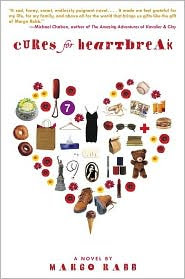 Margo Rabb‘s novel, Cures for Heartbreak, was published in paperback this fall by Delacorte Press.

It was named one of the Best Books of 2007 by Kirkus and Booklist and selected for the Texas Tayshas and Capitol Choices reading lists. It also is the winner of the Writers’ League of Texas Teddy Award.

Margo’s short stories have been published in The Atlantic Monthly, Zoetrope, Seventeen, One Story, and Best New American Voices, and broadcast on National Public Radio.

I actually wrote Cures for Heartbreak with an adult audience in mind and was initially surprised that it sold as YA.

I recently published an essay [“I’m YA, and I’m Okay”] in the New York Times Book Review about this experience–it turns out that many, many authors are writing books that are selling as YA these days, even though they didn’t originally conceive of them that way. (Since publishing that essay, many more authors have written to me to tell me about their similar experiences.)

But it’s been a wonderful experience having Cures published as YA, and I’m thrilled to be part of the genre.

Finishing this book was a long, long, long process. It started out as short stories with a very
autobiographical subject–they were based on the experience of losing my mother, who died almost 18 years ago.

A few years after starting the book, I also lost my father. So I had to stop writing such autobiographical material for a while.

(Or more accurately, I kept writing autobiographical fiction, but I didn’t feel it was very good, so I threw out a lot of work over the course of several years.)

Finally, years later, I returned to the material with a fresh eye and finished the book in about eight months.

Congratulations on the success of Cures for Heartbreak (Delacorte, 2007, 2008)! Could you tell us a little about the novel?

I think of the book as being about how people try to find a way out of grief and heartbreak, and though that sounds a bit depressing, I don’t think of it as a depressing book.

Or, to quote one of my favorite writers, Alice Munro: “I myself find most ‘cheerful’ or ‘positive’ books depressing, but I could be a bit screwed up.”

I first started the book as connected short stories around 1997. I began to publish many of the stories in magazines, and I finished a draft of the book a year later, and that’s when my father died.

I worked on it off and on over the years, but I didn’t really figure out how to make it work as a novel until the fall of 2004. That’s when I threw out about 100 pages and rewrote them, and finished it by the summer of 2005.

It was a huge challenge turning a story collection into a novel.

I actually still view the book less as a novel or a collection, and more in the tradition of the genre of “novels-in-stories”–a genre which I love, and which includes several of my favorite books of all time: The Beggar Maid by Alice Munro, Another Marvelous Thing by Laurie Colwin, and The Elizabeth Stories by Isabel Huggan.

My daughter was born three months before Cures for Heartbreak was published, so my experience of publication is inextricable from my memories of major, intense exhaustion and sleep deprivation!

You write for both young adults and adults. In what way, if any, is your approach different in writing for these two markets?

I don’t approach the two markets differently at all.

In fact, I think that the large number of books that could be published either as YA or adult shows the immense sophistication and complexity of the YA genre.

What do you like about each? What are its special challenges?

I have a deep and abiding love for short novels in both the YA and adult genres. Maybe this is because I also passionately love poetry and short stories–generally speaking, I always feel that the less words used, the better; I deeply appreciate and admire economy of language and of plot.

I also love books about teenagers, whether they’re shelved in the YA or adult sections. Some of my favorite short novels in both categories: Tiger Eyes by Judy Blume, In Summer Light by Zibby Oneal, The Lover by Marguerite Duras, and Flight by Sherman Alexie.

(All of those books, even the last two, which were published as adult, happen to be about teenagers…)

Be patient and don’t doubt yourself. Turn off the phone and the Internet. Don’t give up, and don’t take no for an answer.

All of us in Austin are thrilled to have you here as a new member of our community! Are you interested in speaking in Central Texas? If so, how can planners contact you?

I am really loving Austin–I had no idea I would like it so much. It’s an amazing city, and the YA writers’ community here is wonderful.

I’d love to speak at schools, libraries, or any events in Central Texas, and can be contacted through my website, www.margorabb.com.

I’m taking part in the Texas Book Festival Nov. 1 to Nov. 2, and am really looking forward to that.

I’m working on both a new YA novel and an adult novel, and I also have a short story collection that’s half-finished. I’m looking forward to completing all three!