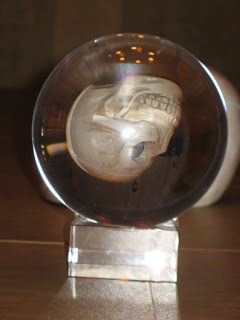 Spooky Cyn-terview and Sanguini’s T-shirt Giveaway Contest from Liz Gallagher at Through the Tollbooth.

The focus is reading and writing with an emphasis on Gothic fantasy (with the obvious caveats that mileage–and approaches–may vary).

Peek: “Of course it’s okay for books to stretch the audience in a myriad of ways. But I’d like to make a special case for unreliable narrators. For worse and better, people are unreliable. We don’t always represent themselves or facts truthfully—sometimes with negative intent, sometimes for other reasons.

“For example, consider the current election cycle. Whatever your political predispositions, I hope we can all agree that future and/or new voters need to be prepared to process potentially unreliable information in a critical manner. Frankly, it’s an important life skill.”

Think up a creepy, gross food item for the Predator menu, and post it in the comments! Or, tell The Tollboothers the most disgusting thing you’ve ever eaten. 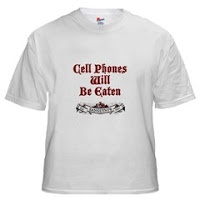 They’ll pick a random commentor (names-in-hat style) on Halloween, and that person will receive his or her choice of a Sanguini’s T-shirt. Note: Sanguini’s is the fictional vampire-themed restaurant in Tantalize (Candlewick, 2007, 2008).

Pictured here, we have the ever popular “Cell Phones Will Be Eaten” T-shirt. Other designs include: “I HEART Baby Squirrel;” “Drop in for a Late Night Bite;” the bird and dragon “Predator or Prey” logos; and the classic Sanguini’s restaurant logos (flowers and fang-marks). See all of the designs.

Winners will be able to specify color and size.

The upside down skull in a crystal ball photo was taken on my dining room table with the lens facing the ball and the skull behind it. The ball was purchased as part of my research for an upcoming short story, “Cat Calls,” which will appear in Sideshow: Ten Original Tales of Freaks, Illusionists, and Other Matters Odd and Magical, edited by Deborah Noyes (Candlewick, July 2009). The skull was purchased at Pottery Barn simply as a Halloween decoration.

Read a Cynsations interview with Liz Gallagher on her debut novel, The Opposite of Invisible (Wendy Lamb, 2008). Peek: “I love Halloween time and wanted to set a story then. While walking past a big junk shop in Fremont (the neighborhood of the book, and the one where I live now, though I didn’t at the time), I realized that it was the perfect setting for a Halloween story. The original first line–‘It all started with this dress.’–came to me on the page, and I just kept going.”

The Sanguini’s T-shirts were designed by illustrator Gene Brenek. Read a Cynsations interview with Gene.