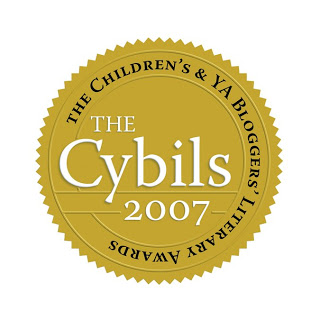 Anne Boles Levy on Anne Boles Levy: Anne Boles Levy is a freelance writer and editor whose book reviews have appeared in the Los Angeles Times. She blogs at Book Buds Kidlit Reviews and founded, with Kelly Herold, The Cybils awards.

When and how did you become involved in the kidlitosphere?

KH: I began blogging in February of 2005, over three years ago.

ABL: I started blogging in Oct. 2004 after my husband starting lugging books home from the LA Times’ book review section. The editors there didn’t have room to run reviews of children’s literature, so I saw a niche.

How would you describe the community?

KH: I love the children’s literature community. It’s such a welcoming, interesting place with writers, illustrators, readers, publishers, agents, editors, booksellers, and more. I think the kidlitosphere has become a place of real debate and creative exploration.

ABL: Curse them all! Just kidding. They’re about as cuddly a bunch as you can find online. I think I’ve received only two or three insulting comments in more than three years of blogging—I bet no political bloggers can say that. Kidlitters are really apologetic when they disagree with you.

What do you see as your goals and role in it?

KH: I’m a generalist: I like to read, review, and discuss books for all age groups. I also like to bring people together with The Edge of the Forest and the Cybils. Finally, I have to admit that I’m most drawn to genre-breaking books—books that do something new and clever.

ABL: I’m just in it for the money. Maybe the fame too. Since I don’t have either of those things yet, I have to keep plugging away. That, and one of these years maybe I’ll finish a picture book manuscript that someone thinks is worth publishing. As for my role in the community, I’m proud that Cybils has maintained high standards—both for the contest and the blog—because participants deserve to see the contest grow in reputation and authority.

What do you love about it? What are its challenges?

KH: I love having the opportunity to discuss writing, reading, and books with people who love books as much as I do. I love the sense of community in the kidlitosphere. I’ve made some real friends here, Anne being one of them. Because there is no overarching structure to the kidlitosphere I don’t see any challenges per se, but I do think it’s difficult for new voices to be heard.

ABL: I love reviewing. I like to think it introduces parents or librarians to some new friends in the picture book world, and I know most authors could always use an extra boost. So I feel like I’m really helping in my small way. As for the challenges; I’ve faced a number of daunting personal, financial, and family crises in the past few years, and blogging has always had to take a back seat. After every interruption, I have to fight to regain readers and rankings, and that can be tough.

KH: I considered quitting blogging about a year ago. But I realized this ongoing conversation is really too important to me intellectually and personally.

ABL: The first time my husband brought home a stack of picture books from his office, I thought, wow, there are so many great books! I felt like I was in on a very cool, important secret. Now the secret is out, and I like that feeling even better.

Could you offer us a brief history of the Cybils? How did the program originate?

KH: I was kvetching on the blog a few years ago about the Quills book award. Anne popped on by and left a comment to the effect that “we could do a better job.” So I said—let’s do it!

ABL: Before I could say “who the heck would volunteer for such a crazy thing?” we had 80 people signed up. This year we had 90. We expect a similar number as we enter our third season in August.

What were its goals?

KH: The main goals of the Cybils, as I see them, are to award both literary merit (like the ALA awards) and kid appeal. Over the years we’ve found kid appeal difficult to define, but we try our best. Also, and I think this is most important, we also give awards to oft-neglected categories, like non-fiction and poetry.

ABL: And graphic novels! Those folks love us. We’re one of the only literary awards out there for them. I think people also respond to the short lists and winners because we’re so transparent about how we arrived at our decisions. We have the judges post short explanations of why this or that book made the list. People can see their reasoning, even if they don’t agree.

Who were the key players, and what were their roles?

KH: Anne and I have been the two main organizers from the beginning—Anne dealing with the Cybils blog, and I’ve organized the people and the books. Sheila Ruth of Wands and Worlds has been absolutely instrumental to the process, dealing with independent publishing houses and helping out behind the scenes. We’d never be able to do this without the category organizers who put so much work into running their committees, making sure the bloggers get the books they need. We wouldn’t have been able to do anything without Jen Robinson, Jules and Eisha, Little Willow, Kelly Fineman, Liz B., Betsy Bird, Jackie Parker, and, and…I’m sure I’m forgetting someone very important…Anne?

ABL: I’d add some of the organizers from our first year like Susan Thomsen, Chris Barton and also Sarah Stevenson from graphic novels this year. Nobody really knows how much work is involved, but nobody dropped out, either. They finished their commitments to us, no matter what. They all rock.

How was the award process organized?

KH: Completely on the fly. We added more layers of organization for year two, and hopefully, we’ll streamline things even more going into year three.

ABL: We use email and a Yahoo! Group to keep everyone talking. Kelly and I call each other pretty regularly during the height of Cybils season. The panelists and judges also might IM or use chat rooms when they’re in the thick of discussions.

What lessons were learned from the first year?

KH: Most of our lessons came from dealing with the publishers for review copies. In the second year, we learned even more lessons, mostly having to do with the awards’ growing popularity: we’ll need to extend our reading time, make some category changes, etc, etc, etc.

ABL: Many panelists and judges also wanted a firmer hand in the form of more guidelines, some leadership to get discussions going, a sense of who was in charge and what was expected and when. Some of the Internet’s freewheeling nature didn’t carry over very well to a literary awards, and many participants weren’t sure how to fill the vacuum.

We were deliberately hands-off, but this year we’ll try and at least give more detailed prompts for getting discussions going and steering them towards a decision—but only where it’s needed. Many groups did just fine on their own, and I don’t think we should butt in unnecessarily.

What changes were made?

KH: We requested copies as nominations came in for each individual category. We decided we needed to centralize this process so publishing houses weren’t bombarded with requests. Going into the third year, Sheila Ruth has designed a database system to make this process even more clear and easy for the book organizers (Sheila and I), and we’ve had a big discussion about our book categories and plan on making some changes.

ABL: I’m in the middle of moving to Arizona (from Chicago) and once I settle in, I plan to file incorporation papers as a non-profit so we can form a board of directors, raise more money and go from there. I’ll gradually move into an administrative role and will have to find a deputy editor to take over much of the blogging.

What was the Cybils’ initial impact?

KH: Initially, I think authors and illustrators and independent publishing houses were most impressed. Here was this new award put together by readers and writers looking for something important in their books. Now, though, everyone is paying attention.

How has that impact grown over time?

ABL: Better coverage in more blogs, more hits, more money, and more pressure both from within and without to professionalize. We’re getting there.

What do you see in the future of the Cybils?

KH: We’re going to have to professionalize some. Become a non-profit corporation so that we and our participating bloggers are protected financially and legally. I do expect the Cybils to keep on growing!

ABL: Non-profit status also helps with fundraising. This year, we’re giving out gorgeous fountain pens with our logo engraved on the wooden box.

In future years, it’d be great if we could hand them a check. But we know it’s hard to ask people or corporations for donations if we can’t at least offer them the tax benefit.

KH: I teach Russian and Russian literature at Grinnell College in Grinnell Iowa. I’m developing a children’s literature course with a colleague!

ABL: I’m a mommy to two little kids, a freelance writer and editor, and, right now, a champion packer and mover.