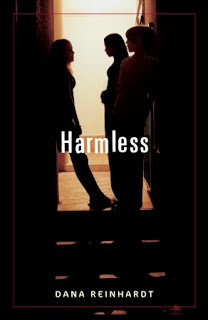 Dana Reinhardt on Dana Reinhardt: “I’ve done all sorts of stuff with my life so far. I’ve been a waitress, a social worker, an answerer of telephones on a crisis hot line, a fact checker for a movie magazine, a reader for a now defunct young adult label at a mass-market publishing house, a law student, and a producer for documentary TV. Now I’m a writer. “

I had one of those stories I hesitate to tell because it’s pretty much a fairy tale and not at all the typical publication experience. The short version is: I sat down, wrote a book, sent it off to my agent and sold it right away.

I guess the stumble in my story is in how long it took me to get the courage to sit down and write the book in the first place. I dreamed of writing novels. I even specifically dreamed of writing teen novels. But I spent years and years doing other things I thought responsible adults were supposed to do rather than trying to do what I really wanted to.

Your debut book was A Brief Chapter in My Impossible Life (Wendy Lamb, 2006)! Could you tell us a bit about it?

A Brief Chapter in My Impossible Life is a story of a sixteen-year-old girl named Simone Turner-Bloom, an avowed atheist who comes to learn that her biological mother was the daughter of a Hassidic Rabbi. It’s a book about faith and family and life and death. But it’s also about first love and friendship and bite-sized candy.

Could you also fill us in on your latest release, Harmless (Wendy Lamb, 2007)?

Harmless is the story, told in alternating points of view, of three friends who make up a lie to cover for having done something they shouldn’t, and what happens as a result of telling a lie they thought was harmless but turns out to have far reaching, devastating consequences.

There’s a certain kind of news story that always grabs my attention. It has a headline that looks something like this: Local Kid Commits Bad or Horrible or Even Unspeakable Act.

When I read these stories or see them on the news I find myself asking the same questions every time: Who are these kids? What kinds of families are they growing up in? Who are their friends? What circumstances contributed to this moment in their lives when everything came undone?

As I writer, I think when you find yourself asking the same questions over and over again, you probably have something worth writing about.

Also, I think the public tends to write off these kids as bad seeds. But I always look at these stories as stories about good kids who have made bad choices, and there’s a difference there that I was interested in exploring with this book.

I started fleshing out the idea while I was editing my first novel, and I’d already sold another book to my publisher, so it all came down to convincing my editor that it could work out as my next project. As she tends to be, my editor was wonderfully supportive, and she asked all the good, tough questions.

Every book has it’s own set of challenges. I’d say the biggest challenge in this book was trying to make the three girls sympathetic.

I know some readers had a hard time finding it in themselves to feel sympathy for the girls after what they’d done. But I felt tremendous sympathy and empathy for all three characters, perhaps because I know how easily I could have been any one of them. Making mistakes, even big ones, is not the provenance of bad kids. Bad choices can happen to any of us.

What were the particular challenges to writing a novel in alternating point of view? What advice would you give to authors taking this approach?

The biggest challenge for me in writing three voices was making them sound distinct. At first I tried verbal tics, or little expressions or pauses or anything really that would make one sound different from the other, but all of those tricks in the end felt clumsy and fake.

The truth is that three girls who are the same age, who are growing up in the same town, who go to the same school, and who spend all their time together are going to sound alike, and there’s nothing I can do about that.

I realized their differences had to come out of their psychologies, their particular ways of looking at the world, informed by their unique histories. These differences are subtler, and I think it takes a little effort to get to know each girl by her voice, but it felt more honest this way I hope it pays off in the end.

(1) “…he pinched the skin on my elbow really hard because he knows that’s the one part of the human skin where we don’t have any real nerve endings” (I tried it; it doesn’t hurt at all!); and

(2) “Parents don’t want to know the truth. They just want to know that everything is perfect and that their children are smart and happy and popular and out of danger so they can concentrate on their own problems.” Obviously, this is Emma’s point of view, her perspective. But I do remember, as a teen, feeling that way. Did you see aspects of yourself reflected in any of the point-of-view characters? If so, would you like to share what they might be?

On (1): I know! It’s weird, right? No matter how hard you pinch it just doesn’t hurt. If you dig in with your fingernail, that’s another story.

On (2): I guess I’d say I agree with you. I also felt that conflict, that desire to somehow protect my parents from everything that went along with my inhabiting a real, more grown-up world. It’s strange, isn’t it? Why do we want to do that? Maybe it’s just part of separating. Or maybe that kind of lying is an essential step on the road to adulthood, and we just tell ourselves we’re protecting our parents when really what we’re doing is just carving out our own space in that new world.

Looking at this from the perspective of a parent (albeit as a parent to still quite little girls), it’s hard for me to imagine that I wouldn’t understand or even expect those very things to happen to my daughters that when I was a teenager I so carefully tried to protect my parents from.

Geez. Thanks. Well, I sat down every day and made myself do the work. I tried not to think about how someday somebody other than me was likely to read the words I’d just written.

That’s the wonderful luxury of writing your first book. You don’t know if anyone is ever going to read it.

How little everything changes. How the actual publication of a book, I mean the day it hits the shelves, is a spectacular non-event. I don’t know what I expected, exactly, but I didn’t really expect a day like any other.

I’d rather, if I may, have that beginning writer travel to the future and talk to the present me. I’d have her tell me to try to write as if nobody, other than me, was ever going to read what I’m working on.

Take the kids to school. Walk the dog. Cook. Shop for groceries. And chastise myself for not using my time better.

I’ve had a new novel come out on May 27th, called How to Build a House (Wendy Lamb, 2008). It’s about a girl named Harper who spends a summer in rural Tennessee building a house for a family who lost theirs in a tornado, while sorting through her feelings about her own family’s demise.