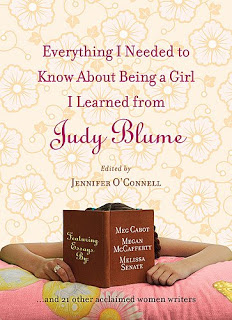 Everything I Needed To Know About Being a Girl, I Learned from Judy Blume by Jennifer O’Connell (Simon & Schuster, 2007). From the promotional copy: “Whether laughing to tears reading Otherwise Known as Sheila the Great or clamoring for more unmistakable “me too!” moments in Are You There God? It’s Me, Margaret, girls all over the world have been touched by Judy Blume‘s poignant coming-of-age stories. Now, in this anthology of essays, twenty-four notable female authors write straight from the heart about the unforgettable novels that left an indelible mark on their childhoods and still influence them today. After growing up from Tales of a Fourth Grade Nothing into Smart Women, these writers pay tribute, through their reflections and most cherished memories, to one of the most beloved authors of all time.”

Visit Jennifer O’Connell, and read her blog. Don’t miss her site, celebrating her YA novels, under the byline “Jenny O’Connell!”

I didn’t always want to be a writer. I just had an idea and started writing, so my story is probably different from most writers’. But I have always loved to read, and still do. I would love to have had more formal training, I wasn’t even an English major in college because I hated being forced to read books I wasn’t interested in. What continues to help me the most is reading and being inspired by what I read.

When I sold my first teen book, I hadn’t even written it yet. So, when I sat down, I realized for the first time how limited writing for teens was. I was used to writing about adults, who can travel by themselves, have full-time jobs, do adult things.

All of a sudden I was confined to school and living with parents. But that’s a lot of what I love about writing for teens–you get to really focus on the characters and their thoughts and feelings about what is going on around them.

No, I have a relatively painless story. Started writing my first book on Nov. 6, 2002, had an agent in December, she sold my book in February, and it was on the shelves in August, 2003. It was so easy I couldn’t figure out what everyone was talking about when they said getting published was hard!

Then I had to write book #2, and I knew exactly what everyone was talking about. There was pressure and the worry I was repeating myself and the realization that if I was going to continue doing this every book was like starting over. It doesn’t necessarily get easier because you always want to be better.

Could you please update us on your recent YA back-list and/or current titles, highlighting as you see fit?

I have a new series coming out in June, called an An Island Summer Series. It was originally called “A Martha’s Vineyard Series,” but it was changed because a book buyer didn’t think enough people could relate to MV.

In any case, it’s a series but each book has a different main character, mentioned tangentially in the book before. As you can probably guess, the books take place on Martha’s Vineyard during the summer, and the main character is always an island girl, someone who grew up on the island and still lives there.

I had such a blast writing these books because I talked with real island teens about what it’s like to live there, what it’s like when your home is invaded by tens of thousands tourists in the summer. I go to Martha’s Vineyard every summer, and it made me look at the island in an entirely new way. The first two books, Local Girls (MTV Books) and Rich Boys (MTV Books) came out in June.

In what areas do you feel as though you must still push yourself?

I need to learn how to write. I wish I had time to take a class and hear how I should be doing it instead of flying by the seat of my pants. Every time I turn in a book, I wish I had another three months to work on it because I know there is more I can do with characters, scene setting, just better wording, etc. That said, I’m the kind of writer who needs a deadline to buckle down and write.

I wrote Local Girls and Rich Boys, start to finish, in less than six months. It was brutal (I also have a “real job,” so writing is squeezed in between travel for work, work, and family). Lesson learned, will never wait until the last minute again.

Congratulations on Everything I Needed to Know About Being A Girl I Learned from Judy Blume (Pocket Books, 2007)! Could you tell us a bit about it?

I had just sat down to write Plan B and was trying to figure out how a 36-year-old woman knew about being a 17 year old girl, and I thought, “Everything I needed to know about being a girl I learned from Judy Blume.”

I called my agent and told her I had an idea–contacted a bunch of writer friends to see if they’d like to contribute essays, and they jumped at it. Everyone had a story to tell and was so passionate about the topic. And so a book was born.

It was misleadingly easy. With every book, I find it’s harder, not the writing but the fear I’ll be repeating myself, that I’ve run out of things to say. The challenges are of two sorts: psychological and logistical. Getting over the fear that I suck and finding the time to write without ignoring my other grown-up responsibilities.

What has been the response from readers? From Judy herself?

Judy came to see me speak at the Martha’s Vineyard Book Festival last summer. She invited me and my family to her house, and we ended up hanging out with Judy and her husband for an afternoon. Quite surreal, hanging out with Judy Blume. She was wonderful and readers have been fantastic. It’s fun to conjure up childhood memories in readers.

Getting published isn’t nearly as hard as continuing to write books.

You also write fiction for grown-ups! How are the markets different?

Similar process, not that different. My fourth adult book was published last May (Insider Dating (NAL, 2007)), and I can’t say I’m anxious to get back to the world of adults just yet. I’m having too much fun with teens.

I’m the Director of Business Development for the technology practice of an ad agency in Boston.

Local Girls and Rich Boys! Check out the trailer I put together (which was a blast):