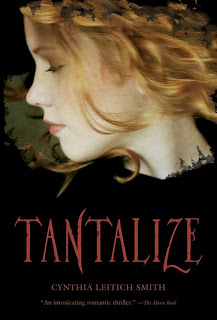 Guess who’s out and about on the Web? I’m honored to announce two new interviews:

(1) Cynthia Leitich Smith: An Interview with an Internet Icon & Legend from Mary Hershey and Robin LaFevers at Shrinking Violet Promotions.

Peek: “I enjoy the blogs as a way of ‘pajama outreach’–you don’t have to put on dry-clean-only clothes and get in the car/plane to do it. But it’s a personal choice. If you feel burdened by the idea of blogging, then you don’t have to (and probably shouldn’t). Put the energy into something that feeds you instead. On the other hand, if it sounds attractive, I recommend…”

Peek: “The purpose of that first draft is just to get to know the characters and their world, explore the themes, and so forth. The fact that it’s going to be trashed anyway takes a lot of pressure off. I can just write and see what happens.”

Please surf by and leave a comment or two!

Thank you Mary, Robin, and Carol!

Tantalize (Candlewick, 2007, 2008) goes on sale in soft cover next month–July 22, 2008! The back matter includes an excerpt from Eternal (Candlewick, 2009), told from the point of view of the female lead. Note: there also is a male lead, and the story is told in alternating points of view by those two characters.

I’m also happy to report that I’ve received sample pages for Eternal, which include the interior art elements, and they look gorgeous.