Feast of Fools: The Morganville Vampires (Book Four) by Rachel Caine (NAL/ Jam, 2008)(sample chapter) goes on sale next week. To enter to win a copy of the book, email me with your name and snail/street mail address by midnight CST June 3! Please also type “Morganville Vampires” in the subject line. Read Rachel’s LJ, visit her page at MySpace. Read a Cynsations interview with Rachel. Peek: “Read the classics. Don’t just read what’s out now, go back and see what used to interest (or scare) people. Some of it’s still scary, some isn’t.” 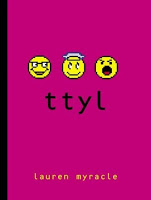 The Cynsations grand-prize May giveaway is an autographed paperback set of all three of Lauren Myracle‘s New York Times bestselling Internet Girls novels (in chat-room-style writing)–ttyl, l8rg8r, and ttfn, all published by Amulet!

Read a Cynsations interview with Lauren. Read Lauren’s blog, and visit her at MySpace!

To enter the giveaway, email me with your name and snail/street mail address by 10 p.m. CST May 31! Please also type “Internet Girls” in the subject line. Note: one autographed set will be awarded to any Cynsations YA reader.

Padma [Venkatraman]’s Climbing the Stairs Blog Tour Finale from Mitali Perkins at Mitali’s Fire Escape. Check out the rest of the tour. Peek: “I became a citizen just over a year ago–when people ask me why, I tell them it’s because America has the best Public Library system in the world.”

How to Write a Nonfiction Book Proposal by Nathan Bransford at Curtis Brown. Peek: “An agent can often sell nonfiction projects on proposal, meaning you write the proposal first, then sell the project, then write the book. It mostly depends on the quality of the idea and its marketability, your platform, and your writing ability.”

John Michael Cummings: official site of the debut author of The Night I Freed John Brown (Philomel, 2008). Includes biography, published works, and contact information. See also JMC Notes, John’s blog. From the promotional copy: “Young Josh knows there is something about the tall Victorian House on the Harpers Ferry Hill, the one his father grew up in, that he can’t quite put his finger on—ghosts he can’t name, mysteries he can’t solve. And his impossible father won’t give him any clues. He’s hiding something. And then there’s the famous John Brown. The one who all the tourists come to hear about. The one whose statue looms over Josh’s house. Why does he seem to haunt Josh and his whole family? When the fancy Richmonds come to town and move right next door, their presence forces Josh to find the answers and stand up to the secrets of the House, to his father—and to John Brown, too! The historic village of Harpers Ferry comes alive in this young boy’s brave search for answers and a place of his own in this brilliant first novel by John Michael Cummings.”

“To celebrate the release of Up All Night by Peter Abrams (HarperTeen, 2008), an anthology containing short stories by Peter Abrahams, Libba Bray (author inteview), David Levithan (author interview), Patricia McCormick, Sarah Weeks, and Gene Luen Yang], HarperTeen is offering aspiring authors the chance to write their own story to be included in the paperback edition. Submit an original short story about a character that stays up all night. The story must take place in the course of a single life-changing night. All stories must be between 5,000 and 10,000 words (12 pt font, double spaced, one inch margins) and all contributing entrants must be between 14 and 19 years old as of April 2, 2008. Download the official entry form (PDF). Entries must be postmarked by October 1st and received by October 7th.” Source: readergirlz.

Question of the Week Thursday: Lisa McMann from Robin Friedman’s JerseyFresh Tude. Robin asks: “Did your publishing experience turn out as you expected?” Peek: “Like any new author knows, there are thousands of new books coming out every month and publishing houses have a lot of authors to tend to. So I knew that if I wanted Wake to get attention, I had to help make it happen.”

Why I Love My Agent by Jenny Han at The Longstockings. Peek: “The first person to really impress upon me the importance of this was Sarah Weeks, our old writing teacher from New School. She told me that it was vital that I have an agent before stepping into the big bad publishing world.”

An Interview with Agent Stephen Barbara of the Donald Maas Agency by Lisa Graff from The Longstockings.

2008 Writers’ League of Texas Agents and Editors Conference has announced its roster of agent/editor speakers. Youth literature professionals include: Kathleen Anderson (YA) of Anderson Literary Management; Lilly Ghahremani of Full Circle Literary (YA); Andrea Somberg of Harvey Klinger (YA); Stefanie Von Borstel of Full Circle Literary (multicultural children’s and YA); Natanya Wheeler of Lowenstein-Yost Associates (YA); Caryn Wiseman of Andrea Brown Literary Agency, Inc. (children’s and YA; scroll for description). Reminder: the deadline for the Writers’ League Teddy Award is June 30.

Texas Non-Fiction Writers: an online community for authors in Texas. A place where writers can swap ideas, ask questions, get critiques, enter writing contests and keep in touch with news affecting non-fiction writers. TNFW also sponsors a first-class autumn writers’ retreat in the Hill Country. Membership is free during 2008.

Seven Impossible Interviews Before Breakfast #75: “Knoxville Girl,” Kerry Madden from Seven Impossible Things Before Breakfast. Peek: “Honestly, I don’t think I’m quite finished with the Weems family yet, but I was terrified of writing ‘manufactured mountain novels,’ so I wanted a break to think about more Maggie Valley stories and what they could be.” Read a Cynsations interview with Kerry.

“Down the Publishing Path” with Harold Underdown from the Institute of Children’s Literature. Note: “Harold answered a huge collection of questions about editors, publishing, and getting a break.” Read a Cynsations interview with Harold.

Fear of Regrets from Darcy Pattison’s Revision Notes. Peek: “I’m afraid to submit, because I might get rejected. Yes. So what?”

The Horn Book Magazine has revised the order in which it lists the books in C. S. Lewis’ The Chronicles of Narnia. Read a Cynsations interview with Roger Sutton, editor of The Horn Book. See the preceding conversation.

Soup’s On: Debbi Michiko Florence in the Kitchen Interview from Jama Rattigan’s Alphabet Soup. Peek: “I think the most frustrating experience for me was not knowing when to stop researching and start writing. I whined to friend and author Jerry Spinelli and he gave me this advice: ‘You can sit on the bench and study the game forever, but you’ll never score until you take off your sweats and start shooting.'”

Hilary Highland: official site of the author of The Wreck of the Ethie, illustrated by Paul Bachem (Peachtree). Don’t miss her school-visit information!

Lobster Press: new blog from the “award-winning publisher of books for children, teens, tweens, and families.” See also the publisher’s official site and teen-page on MySpace!

Managing Expectations by Caroline Hickey at The Longstockings. Peek: “If you aren’t prepared for the reality of being an author, which often means working for many years on several books, slowly building an audience and a name and relationships with booksellers and librarians, and stomaching a lot of disappointments as you watch other new books come out and get more attention than yours, then you need to ask yourself if you really want to be a writer, or if you just want the cache of being published.” 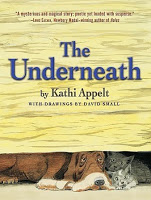 Looking “Underneath” the Imagination Process of Kathi Appelt, author of The Underneath (Atheneum, 2008) from Lynn E. Hazen at Imaginary Blog. Peek: “For me, the key has always been faith. I simply have faith that if I sit there long enough, the words will come to me. But I’ve also learned (the hard way) that the words that come aren’t always beautiful and lyrical and all of that. That falls into that category called revision. So, I’m gentle with myself in a number of ways.” Read Cynsations interviews with Kathi and Lynn.

Pre-School Through High School? Non-Fiction Picture Books Across the Grades by David Schwartz at Interesting Nonfiction for Kids. See also Does writing fiction affect the non-fiction writing process? by Padma Venkatraman at I.N.K.

The Irondequoit Public Library’s Teen Advisory Board created a book trailer for one of my favorite books, Shug by Jenny Han (Simon & Schuster, 2006). See my recommendation of the novel. Source: The Longstockings.