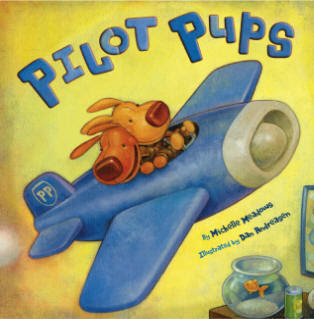 Visit Michelle Meadows! See photos of her recent signing at the National Air and Space Museum.

Congratulations on the release of Pilot Pups, illustrated by Dan Andreasen (Simon & Schuster, 2008)! Could you tell us a bit about it?

Pilot Pups is a rhyming adventure story about toy dogs who go on a special search-and-rescue mission. I think it celebrates the power of the imagination, the secret life of toys, and the wonders of transportation.

I’ve read stories about real-life search-and-rescue operations, and I find it fascinating how teams pull together to help when someone is missing–whether it’s an adult hiker or a small child who gets lost.

I was trying to create a situation where readers would be eager to follow along with the Pup heroes to find out who they are searching for. And of course you have to read the book to find out!

What was your initial inspiration for writing Pilot Pups?

For years my son has had stuffed animals sitting on top of his bookshelf. He especially had a lot of toy dogs and various aircraft. I wrote this story after imagining that the toy dogs on my son’s shelf climbed into an airplane and took off.

Also, I had been circulating a totally different manuscript about puppies for a couple of years with no luck. That manuscript got rejection letters, but some editors did comment that they liked aspects of it. So Pilot Pups was my attempt to write something completely new and better, but still with pup characters.

What was the timeline from spark to publication, and the major events along the way?

From spark to publication was about three years. I spent a couple of months thinking about the concept and writing the book. About three weeks after my agent (Rosemary Stimola)(agent interview) sent the manuscript out, she called to tell me that she had received multiple offers. She sold Pilot Pups in an auction, which was very exciting. 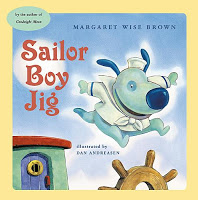 Soon after that, my Simon & Schuster editors let me know that they had chosen Dan Andreasen to illustrate. Dan has done great illustrations for many other books, including Sailor Boy Jig by Margaret Wise Brown (Margaret K. McElderry, 2002).

What did Dan Andreasen‘s art bring to your text?

Dan’s illustrations really helped bring the story to life, and he brought a tremendous amount of creativity to the project. I was delighted when I first saw the sketches, and I think that young children will enjoy studying and revisiting the pictures.

We last spoke in May 2003 about the publication of your debut picture book The Way the Storm Stops, illustrated by Roseanne Litzinger (Henry Holt, 2003). Looking back, what has that book come to mean to you? What did you learn about being an author from your debut experience? 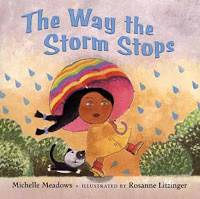 The Way the Storm Stops will always be very special to me because I wrote it after rocking and singing my son to sleep during a big thunderstorm. He was about two then, and now he is 11.

I think my debut experience taught me that there is so much more to being an author than writing a particular story. I learned the importance of connecting with children through school visits and talking with them about the importance of reading and writing.

I have several more rhyming picture books in the works, and I’m not quite sure in which order they will come out. But following Pilot Pups, you can look out for Biker Pups, in which the pups are motorcycle police officers who bring order to the toy town. I also have a forthcoming book about a mouse who gets lost and another book about some pigs who love to make noise. And keep your fingers crossed for me as I continue to work on some new projects in the early-reader genre.