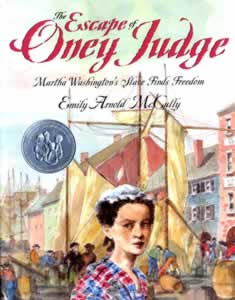 The Escape of Oney Judge: Martha Washington’s Slave Finds Freedom, the winner in the Books for Younger Children Category, is written and illustrated by Emily Arnold McCully and published by Farrar Strauss Giroux.

Mrs. Washington declares that young Oney is just like one of the Washington’s own children, but Oney is not fooled. On the night Mrs. Washington tells Oney she will not grant her freedom upon her death, Oney thinks quickly, acts courageously and flees.

Expressive watercolors within this well-researched biography portray the bravery of Ona Maria Judge, an African-American woman who claimed, and fought for, the right to have “no mistress but herself.”

We Are One: The Story of Bayard Rustin by Larry Dane Brimner, published by Calkins Creek, an imprint of Boyds Mills Press, Inc., is the winner in the Books for Older Children Category. 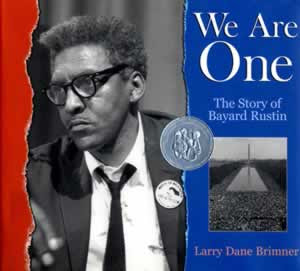 Working behind the scenes because of his sexual orientation and unpopular political stands, African-American pacifist and civil rights activist Bayard Rustin, a trusted adviser to Rev. Dr. Martin Luther King, Jr., organized the 1963 March on Washington for Jobs and Freedom.

Succinct prose, powerful quotations and fresh historical photographs place the story of Rustin’s life alongside the story of the March, revealing the breadth and depth of Rustin’s decades of commitment to confronting racism and promoting peace in the United States and in countries around the world.

One book has won honors in the Books for Younger Children Category. 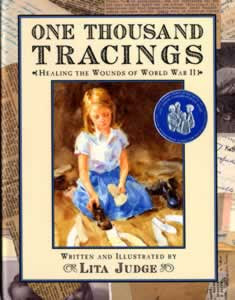 One Thousand Tracings: Healing the Wounds of World War II, written and illustrated by Lita Judge is published by Hyperion Books for Children.

After discovering one thousand yellowed foot tracings in her grandmother’s attic, Lita Judge wrote this tribute to her grandmother who had used these newspaper tracings to find appropriately-sized shoes to send to needy German families in the aftermath of World War II.

A combination of paintings, collages of original photographs and reproductions of foot tracings underscore the message of compassion at the heart of this family story.

Three books have won honors in the Books for Older Children category.

Rickshaw Girl by Mitali Perkins, with illustrations by Jamie Hogan and published by Charlesbridge, is a contemporary novel set in Bangladesh.

In clear prose and detailed black-and-white drawings, ten-year-old Naimi excels at painting alpanas, traditional designs created by Bangladeshi women and girls. Her talent, though valued by her family, cannot buy rice or pay back the loan on her father’s rickshaw as a son’s contribution would do. Determined to help financially, Naimi disguises herself as a boy and sparks surprising events that reveal an expanding world for herself and women in her community.

Elijah of Buxton by Christopher Paul Curtis, published by Scholastic Press, an imprint of Scholastic, Inc., is a sensitively-written historical novel infused with the spirit of youth.

Eleven-year-old Elijah bursts with pride at being the first child born free in Buxton, Canada, a settlement of runaway slaves just across the border from Detroit. When a scoundrel steals money saved to buy an enslaved family’s freedom, Elijah impulsively pursues the thief into Michigan. The journey brings him face-to-face with the terrors of slavery, pushing him to act courageously and compassionately in the name of freedom. 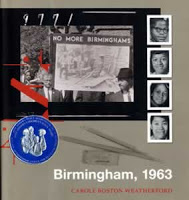 Birmingham, 1963 by Carole Boston Weatherford is published by Wordsong, an imprint of Boyds Mills Press, Inc. Deftly-written free verse and expertly-chosen archival photographs lay open the horror of the 1963 Birmingham church bombing by telling the story in the voice of an imagined girl in the “year I turned ten.” Four memorial poems, each a tribute to one of the four girls murdered in the bombing, conclude this slim, powerful volume and carry its emphatic message: No More Birminghams!

Since 1953, the Jane Addams Children’s Book Award annually acknowledges books published in the U.S. during the previous year. Books commended by the Award address themes or topics that engage children in thinking about peace, justice, world community, and/or equality of the sexes and all races. The books also must meet conventional standards of literary and artistic excellence.

The 2008 Jane Addams Children’s Book Awards will be presented Friday, October 17th in New York City. Details about the award event and about securing winner and honor book seals are available from the Jane Addams Peace Association (JAPA).

For additional information about the Jane Addams Children’s Book Awards and a complete list of books honored since 1953, see www.janeaddamspeace.org.

Founded in 1948, JAPA is the educational arm of the Women’s International League for Peace and Freedom (WILPF). In addition to sponsoring the Jane Addams Children’s Book Awards and many other educational projects, JAPA houses the U.N. office of WILPF in New York City and owns the Jane Addams House in Philadelphia where the U.S. section of WILPF is located. Organized on April 28th in 1915, WILPF is celebrating its 93rd year.