City of Ashes by Cassanda Clare (Book Two: The Mortal Instruments)(McElderry, 2008) is the first CosmoGirl book club pick, and in celebration, the magazine is offering an “exclusive alternate chapter” by Cassandra, among other cool features. Read a Cynsations interview with Cassandra.

Hot Off the Press: A Sneak Peek at Publishers’ Newest and Hottest Titles from CBC Magazine. Featured books include Attack of the Turtle by Drew Carlson (Eerdmans, 2008), A Curse as Dark as Gold by Elizabeth C. Bunce (Arthur A. Levine, 2008)(above), and Magic Pickle Vs. the Egg Poacher by Scott Morse (Graphix, 2008). 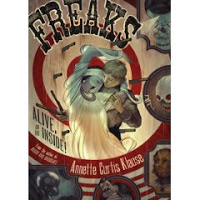 Human Oddity: a new blog from author Annette Curtis Klause. Annette is the award-winning author of Alien Secrets (Delacorte, 1993), The Silver Kiss (Delacorte, 1990), Blood and Chocolate (Delacorte, 1999), and most recently, Freaks: Alive on the Inside (Simon & Schuster, 2006). Read a Cynsations interview with Annette.

Q&A with Mary E. Pearson by Sue Corbett from Publishers Weekly. Here’s a sneak peek: “I wanted the world to be believable but I had to be careful not to date the book and not to make it read like a science textbook. It required me to learn a lot of stuff about medical technology and ethics and then forget it so I could write the story.” Read Cynsations interviews with Mary and Sue.

Congratulations to debut author Elizabeth C. Bunce on the release of A Curse Dark as Gold (Arthur A. Levine, 2008). From the promotional copy: “As Charlotte struggles to manage the difficulties she inherits along with Stirwaters Woollen Mill, she discovers a shadow world at the fringes of the familiar: Dark magic, restless spirits, a mysterious Helper. A wicked uncle, an age-old curse…. How can Charlotte prevail with such forces allied against her? In this novel inspired by “Rumpelstiltskin,” the miller’s daughter of the fairy tale comes to life as a young woman determined to save her family and her mill–whatever the cost.” Visit the Class of 2k8.

On Blogging: Tips for Newbies: an interview with Mitali Perkins by Taylor Rogers, Publicity Assistant at Charlesbridge Books, at Mitali’s Fire Escape. Here’s a sneak peek: “I’m not a big name and was previously known only marginally as a ‘multicultural’ author. The blog has given me a chance to introduce my humor (or so I call it), views, and vision more widely; I’m convinced it’s brought down walls, erased preconceptions, and opened hearts and minds to my voice in fiction.” 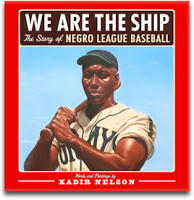 28 and Beyond: It Chicks by Tia Williams: a discussion by Paula Chase-Hyman from The Brown Bookshelf. Here’s a sneak peek: “…the mainstream doesn’t have the market cornered on the antics of students of privilege. What It Chicks does is give readers a peek into a world they’ve likely never been a part of and likely never will be beyond literature or television.” Read a Cynsations interview with the founders of The Brown Bookshelf.

Woodchuck Attack! An interview with Dan Elish by Lisa Graff from The Longstockings. Here’s a sneak peek: “I started my career writing slightly over the top, Roald Dahlesque children’s novels but had gotten away from writing that kind of book for a number of years. Fortunately, an editor at Harper Collins, Jill Santopolo, read one of my early books, The Worldwide Dessert Contest, and suggested that I try and come up with some sort of new zany novel.”

“On Keeping Score,” an original essay, by Linda Sue Park from Powells.com. Here’s a sneak peek: “Writing about Maggie’s love for the Dodgers enabled me to explore perhaps the greatest era baseball has ever known–the post-war years.” Read a Cynsations interview with Linda Sue. 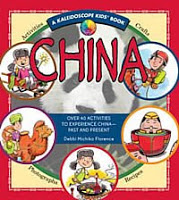 Congratulations to debut author Debbi Michiko Florence on a successful launch of China: A Kaleidoscope Kids Book, illustrated by Jim Caputo, (Williamson Books, 2008)! Check out the pre-party, setting up, the signing, and the end! Debbi says: “I have many special memories I’ll keep with me forever from my book party/signing.” Note: I wish I could’ve been there! 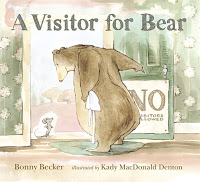 Congratulations to Bonny Becker on the success of A Visitor for Bear, illustrated by Kady McDonald Denton (Candlewick, 2008)(interior spread). From the promotional copy: “Bear is quite sure he doesn’t like visitors. He even has a sign. So when a mouse taps on his door one day, Bear tells him to leave. But when Bear goes to the cupboard to get a bowl, there is the mouse–small and gray and bright-eyed. In this slapstick tale that begs to be read aloud, all Bear wants is to eat his breakfast in peace, but the mouse–who keeps popping up in the most unexpected places–just won’t go away! Cheery persistence wears down a curmudgeonly bear in a wry comedy of manners that ends in a most unlikely friendship.” In a starred review, School Library Journal cheered, “The lively repetition and superb pacing make this an ideal choice for storytime.” Note: learn more about Bonny from Adams Literary.

Author Anastasia Suen is offering two online workshops in April for adults who want to write for children. She is the “the author of 106 books: two board books, 37 picture books, 34 easy readers, 18 hi-lo books, 14 middle grade books, and Picture Writing (Writer’s Digest Books). Anastasia has been teaching since 1977.” The classes will include:

Intensive Picture Book Workshop from March 31 to April 25. “Learn the basics of writing a picture book. Each workshop includes three critiques and is limited to five students.”

Picture Book Poetry Workshop from March 31 to April 25. “Celebrate Poetry Month by reading and writing poetry! (The second week is devoted to stories in rhyme.) Each workshop includes three critiques and is limited to five students.”

The SCBWI Bologna 2008 series is ongoing here at Cynsations! Check back Monday for more interviews with authors, illustrators, editors, art directors, agents, and more from the U.S. and around the world.

Don’t miss this week’s interview with YA author Kathleen Duey, who said, “I have a MySpace page with, like seven or eight friends. Please, anyone, befriend me. There is lots of room at my lunch table.” Note: MySpacers, send Kathleen some love!

Here’s more good news: Charlesbridge editor Yolanda LeRoy, who was a late addition to the Bologna faculty, will be added to next week’s interview roster!

Also, among those who feature recommendations/reviews, I’m interested in compiling a list of those to whom books may be sent directly (with contact information and any stimulations). Again, please email me with applicable information! Thanks!

My favorite comic of the week was Wonder Woman #18 (DC, May 2008): “Return of the Khund!” It’s no secret that, while the art is usually fantastic, over the years Wonder Woman as a character has suffered as writers seem to struggle with offering a strong, smart, peace-loving warrior who doesn’t come off as wooden or preachy. I’m pleased to report that these days the Amazon princess is mighty and good-hearted with a refreshing sense of humor that grounds the character and makes her more accessible. On another note, if you’re not already reading “Buffy the Vampire Slayer, Joss Whedon’s Season Eight” (Dark Horse), I’m pleased to report that, in issue #12, Dracula is back.

In other news, the Tantalize audio (Listening Library, 2008) is available at iTunes!

I’m also pleased to announce that the prose version of Tantalize (Candlewick, 2007) has been named a New York Public Library Book for the Teen Age 2008! I’m hugely honored!

Rain Is Not My Indian Name (HarperCollins, 2001) is listed among recommended titles in an extensive bibliography that follows “Culturally Speaking: Mixed Ethnicity” by Sherry York, which appears in the February 2008 issue of Library Media Connection. Sherry says: “Children and young adults of mixed heritage may find themselves and their families reflected in literature. Others can experience vicariously the lives of these fictional and real-life individuals.”

Of late, I took the challenge to offer up 15 odd trivia facts about myself and tagged a few local friends. The latest entry comes from Jennifer at Jennifer Ziegler Word Processor. Here’s a sneak peek: “I once made the New York Times’ Bestseller List. Swear to god honest. On November 3, 2002, I made it to number ten on Children’s Paperbacks. It was for a mass market prequel novel based on the TV show ‘Alias.’ The story was called Alias: Recruited and was published under my pen name Lynn Mason. Note: trust me when I say the previous admission pales beside Jennifer’s discussion of the mysterious “Pig-Dog.” Read a Cynsations interview with Jennifer, and don’t miss the previous posts! Don at Devas T Rants and Raves answered with 15 Random Things, Jo at Jo’s Journal responded with 15 for Team, and Alison at Alison’s Journal shared her own Funky 15.