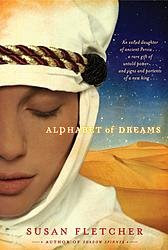 Susan Fletcher has received many awards and other recognition for her books, including the American Library Association Notable Books for Young Readers, American Library Association Best Books for Young Adults, the Bulletin of the Center for Children’s Books Blue Ribbon, School Library Journal Best Books, and two Oregon Book Awards. She also was a finalist for the Western Writers of America Spur Award. Anita Loughrey interviewed her in November 2008, as one of the speakers at the SCBWI Bologna Conference 2008 (scheduled for March 29 and March 30 in Bologna, Italy).

SF: I’ve wanted to be a writer since I was in third grade. That’s when reading got easy enough that I didn’t have to actually think about it–I could just dive down into a story and live it. Third grade was also when I began to understand that there is music in words. One day, our teacher demonstrated on the blackboard that it just didn’t sound right to have every sentence in a paragraph begin with the exact same word. Now I realize that there are exceptions to this, but that day I got for the first time that the rhythms and sounds of words matter. I’d been taking piano lessons and making up my own songs on the side, just for fun. Now I started playing with words in the same way.

What other jobs have you had that led to being a writer?

SF: I waited tables while in college, and then, after graduation, worked at an advertising agency buying television time. These jobs didn’t lead to my becoming a writer by building up useful skills or giving me useful ideas. But I was pretty miserable at work, and I realized that if I was ever going to be happy in my working life, I was going to have to overcome my fear of rejection and just start writing.

I got a copywriting job at the agency, and then went on to freelance magazine articles. But when I wrote my first book for children, I knew I’d found work I loved.

SF: Right now I’m working on another dragon novel, one that’s connected to but very different from my Dragon Chronicles. I’m calling it a “companion” to the earlier series.

If you could be a character from one of your books who would it be and why this particular character?

SF: Well, that’s a tough one, because I always try to make things hard for my characters. I give them experiences that I, personally, would not like to undergo.

But possibly I would most like to be Kara, from Flight of the Dragon Kyn, or Marjan, from Shadow Spinner–not because of what happens to them in the story, but because they might have meaningful work to do after the story is over.

Not that raising a family isn’t meaningful; I think that raising my daughter was the most important thing I’ve done in my life–far more important than writing my books. But having this other work, this work that I love, apart from the family work, is just so satisfying.

Kara could be a falconer. Mitra could be a pigeon keeper and a storyteller. They could find refuge and usefulness in their work.

SF: It’s probably influenced me more deeply than I yet understand! But on a rather superficial level, I’m attracted to writing about things I loved as a child. We had birds and dogs as pets–it seems we always had a pet. I do love animals, and I love to write about them. Even my dragons are influenced by my pets, past and present.

Also, I’m the oldest of four children, and I often find myself drawn to write about an older child protecting or taking care of a younger one. Not that I was such a great older sister! But it’s a place I often go to in my writing.

SF: As a child, my favorite book for years was A Wrinkle in Time. I don’t think I fell that hard for another book until I encountered Anna Karenina late in high school.

But probably the most important thing is that I love the characters so much. They’ve become part of who I am, as real to me as beloved friends who have moved away and might call or visit at any time.

SF: My first novel took a year and a half, and it’s taken progressively longer and longer with each successive book. My last novel, Alphabet of Dreams, took five years. Ouch! Why? I seem to be doing more research. And also, in more recent years, teaching and school visits have taken lots of my time.

SF: The hardest part is getting the first draft down. It feels like fog to me at that point–my characters unformed, the landscape whited out, the shapes of the characters’ journeys shrouded. Once I get the shape of things, I can come back and bring it to life.

Do you work with the television, radio, or stereo on? In cafes, nursing a half-cup of lukewarm tea, or in isolation?

SF: Usually, I work in silence, when I can. I have an upstairs studio, and I don’t turn on the music when I write. Sometimes, when I’m stuck, I take my laptop to a coffee shop; for some reason, café noises don’t usually interfere.

How much do you think a writer needs to market him/herself/the work? What do you suggest?

SF: It does seem to me that we have to do more marketing than we used to. In the old days, school budgets were higher, and school librarians read the reviews and selected books from review journals. So all you needed was a couple of good reviews, and you would do okay.

Now, a lot of the sales have shifted over to bookstores, and they need brisk turnover to justify a book’s presence on the shelves.

I’m not very good at marketing, and I don’t really know what works. I finally got my website up, and I have fun updating it. I put in material for kids, teachers, and book group leaders. 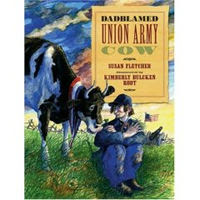 Beyond the website, I send out postcards to children’s bookstores and to other relevant venues. For my recent picture book (Dadblamed Union Army Cow), for instance, I sent postcards and/or letters to American Civil War historical sites. I also accept lots of invitations to signings and school visits.

I find that promotion takes time out from the actual writing, so I’m loath to spend too awfully much time on it. Also, for my two books that have sold the best, I did little or no marketing. But I realize that it’s necessary in today’s world. I’d definitely welcome suggestions from someone who knows more about this than I do.

SF: No, I don’t blog. Maybe I will someday, but not now. (How do people find the time to blog?)

SF: My favorite was a handwritten letter from a sixth grader from Texas. He told me that ever since he’d read Dragon’s Milk, he’d been looking for a green-eyed girl. (In my books, green-eyed people can communicate with dragons.) “Some have come close,” he wrote, “but not close enough.” He said he’d gone to the library looking for the Bok of Dragon (a made-up title mentioned in my novel) but neither he nor the librarian had been able to find it. He asked me if my character Granmyr was a real person, because I’d put part of a letter Granmyr had written at the top of one of the chapters.

I just loved that he went looking for traces and artifacts of the world of Dragon’s Milk in his world! I kind of hope he felt about my characters the way I feel about the characters in To Kill a Mockingbird–that they were friends who had just gone away for a while and might call or visit at any moment.