One of my MySpace pals has “tagged” me to offer up “15 weird, random things, facts, habits, or goals” about myself. It was a well-timed request as I’m in post-deadline recovery. Here goes! 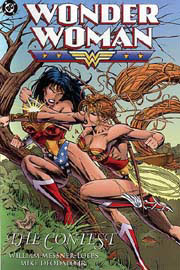 I own every issue of the Wonder Woman comic published since about 1973. At a time when girls (at least in suburban Kansas City) were still told to “let the boys win” and “don’t let people know you’re smart,” Wonder Woman was as strong as Superman, as smart as Batman, and had really kicky boots. She also emphasized the importance of relationships between women as opposed to being defined by a man. Note: I subscribe to about 100 comics a month.

When I was in elementary school, I would practice signing my name on the off-chance that someday people would want my autograph. I have no idea why. Despite my wonderful fictional role model (above), I was fairly insecure as a child. In any case, it was a very complicated signature that took a long time. Oddly enough, I do autograph books now, but in a much speedier and less fancy manner. Note: maybe it was one of those dream-it, achieve-it things.

I have seen “Star Wars: A New Hope” more than 350 times (paid admission) in movie theaters. Granted, it played at my local dollar theater for what seemed like years, but nevertheless, I was in love–not only with the story but storytelling. I studied all of the behind-the-scenes books for hours on end. 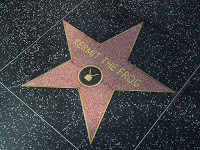 I do a great vocal impression of Kermit the Frog. I’m hesitant to admit this because it may prompt pleas to illustrate this rare and lovely talent. So, please be advised that I do so only at my discretion, usually unexpectedly, and when properly motivated. That said, it is fairly hysterical, if I do say so myself.

Authors of my favorite books as a young reader included Judy Blume, E.L. Konigsburg, and Katherine Paterson. I’ve since had the honor of interviewing Judy online, having a book signed by Elaine, and chatting with Katherine when she visited Vermont College of Fine Arts. My meeting with Katherine was the most recent. She shook my hand, and I made her laugh once. I wish someone had told me when I was twelve that I would someday get to do that.

My first car was a red 1967 Mustang Coupe, which I totaled in an ice storm on my way home from college finals. I distinctly remember thinking that if I died after doing all that work, I’d be really annoyed.

One summer when I worked at my local movie theater, a man with a gun broke in and stole our copy of “Indiana Jones and the Temple of Doom.” I wasn’t there, but it still seemed quite exciting at the time. Back then, there were fewer theaters, and we fielded all the major new releases. Lines flowed out the building. News crews came to film the crowds. I have probably popped more corn than anyone you’ll ever meet. Note: check out the website and trailer for “Indiana Jones and the Kingdom of the Crystal Skull.” 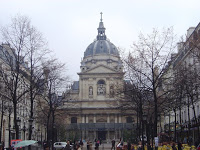 I studied law abroad one summer in in Paris and stayed at a dorm for American students that was located across the street from Luxembourg Garden. While I was there, I shot more than 30 rolls of film. I have only returned to Paris once, on a vacation with Greg in 2000. However, it remains one of my favorite cities.

By the time I quit my law “day” job clerking in the Office of the General Counsel for the U.S. Department of Health & Human Services/Social Security Administration at age 27, I had held jobs as a: babysitter, popcorn popper, movie-theater cashier, waitress at a Mexican restaurant, waitress at a country club, gas-station cashier, reporting intern for several small-town newspapers (and a major metropolitan daily), editorial assistant at a state university, public relations intern for a fortune 500 company, public relations intern for a non-profit, media marketing assistant for one of the world’s largest privately-held corporations, telephone operator for a bank, receptionist for a law firm, intern for a federal appeals judge, summer clerk for a legal aid office, and part-time clerk for a small women’s rights law firm. Note: Since then I’ve taken one part-time job tutoring English and another as a graduate assistant in Russian history for a private college. I now teach quarter-time at VCFA.

When I got married in Kansas City, my wedding cake was topped by a crystal daisy. (Gerbera daisies are my favorite flowers). The groom’s cake was topped with a model of The Starship “Enterprise.”

My phobias are heights, enclosed spaces, germs, big water, children under three, and lettuce. With the kids, I’m afraid that I’ll drop them on their heads. Someone told me once that it takes a while for the skull to fuse together, and I’ve been nervous about it ever since. With regard to the water, I saw “Jaws” at an impressionable age (and was raised in the heartland, far from the seas). So far as the lettuce is concerned, it’s really more about what might be lurking in the lettuce.

Of the U.S. Presidents, I have met Gerald Ford and Bill Clinton. I met Ford when I was a child in Vail, Colorado, and Clinton at a political fund-raiser in Iowa City.

I am very proactive about doing real-world research for my fantasies. When I was working on Tantalize (Candlewick, 2007), I shot tons of film of South Congress as well as Austin’s Bouldin Creek and Fairview neighborhoods and the hike-and-bike trail along Ladybird Lake. I also approached several people and asked if I could take their photos to use as models because I thought they looked like vampires or shape shifters. Everyone I spoke with was thrilled.

Hands-down, the most enthusiastic supporter of my books in my family (other than Greg) is my aunt Linda. She’s a world traveler and has taken numerous photos for me to use for reference and presentations.

My favorite quirky and unexpected moment of 2007 was standing in line for a men’s restroom at the White House with Holly Black (pictured)(the women’s was closed). We were at a breakfast in celebration of the National Book Festival.