Congratulations to the winners and honorees! Hooray for all the hard work of the committees!

I’m taking a brief hiatus from my winter hiatus to make note of those authors (and one fabulous illustrator) previously featured on Cynsations who may be found among today’s celebrated youth literature creators.

This blog will resume regular posting again on Feb. 1.

Congratulations to fellow Texas and Gothic fantasy author A. M. Jenkins, winner of an ALA Printz honor for Repossessed (HarperCollins, 2007)!

In an August 2007 interview at Cynsations, she said: “I spend quite a bit of time in the car because my kids have to be dropped off at different schools, so I think a lot about things like whether there’s really a Satan, and what’s the point of having a hell, and whether I should stop and get a Milky Way at the Texaco.”

Congratulations to Tracie Vaughn Zimmer, winner of a Schneider Family Book Award (in the middle grade division) for Reaching for Sun (Bloomsbury, 2007)!

In an April 2007 interview at Cynsations, she said, “I revised a dozen times over four years for different editors and houses who would eventually consider it “too” quiet, poetic, “too” something for publication. It finally found Melanie Cecka who started to turned it down but then called my agent back because she couldn’t get Josie and Gran out of her head. She gently pulled the rest of the story out of me…” 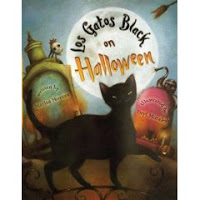 In a September 2006 interview at Cynsations, Marisa said, “In the late 1990s, my mentor, Barbara Steiner, sent me a Halloween postcard that had a fun, spooky four-line poem on the front. I pinned it up on my “inspiration” bulletin broad that hangs on the wall to the left of my computer in my office. I pin a lot of things to that board: favorite souvenirs from our travels around the world, meaningful fortune cookie fortunes, motivational blurbs on bookmarks, comics, postcards, special photos. I’d had the Halloween postcard up for a couple of years, and I’d reread the poem periodically. I really like the meter, the bu-bump, bu-bump, bu-bump rhythm of it. And it spoke of pumpkins and witches and black cats–all the Halloween things I’m so fond of.

“One day, when I was sniffing around for inspiration, I reread the poem.”

In a September 2006 interview at Cynsations, Yuyi said, “…I did quite some research for clothing, because I wanted to bring to my work a taste of colonial Mexico. Many of the dead in the book come out their graves after hundreds of years and still wearing the clothes that distinguished such a controversial period.”

Please feel free to share this link or any of those listed above with other lovers of youth literature.