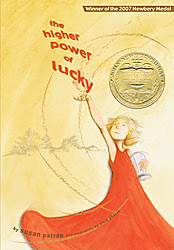 Susan Patron on Susan Patron: “Born in San Gabriel in 1948, grew up in Hollywood. Two sisters. BA in English Lit and a master’s in Library and Information Science. Married to Rene Patron; we live in a neo-Spanish-style house very similar to the one in which I grew up and about four miles away, which I grant you is a little weird. Especially for someone whose initial plan was to be a struggling writer renting a maid’s room in a Paris attic.

“Hired in 1972 as a children’s librarian at the Los Angeles Public Library, I rediscovered children’s books, learned how to tell stories, and taught preschoolers how to make their fingers into eency-weency spiders. In 1980, I became LAPL’s Juvenile Materials Collection Development Manager, which means I evaluated everything for branch library collections targeting kids up to the age of ten or eleven.”

I loved my work as a librarian, but wanted to be a writer, too. I’d met editors at publisher booths during ALA conferences. Going against popular wisdom that no one wants to see folktale retellings from first-time writers, I sent a contemporary version of the “Stone Soup” tale to several houses before Richard Jackson at Orchard bought it. This picture book became the first in a trilogy about Billy Que, some bad boys who are friends of his, and two Dustdobbins who live in the dust under his bed.

These stories, Burgoo Stew (1991), Five Bad Boys, Billy Que, and the Dustdobbin (1992), and Bobbin Dustdobbin (1993) (all Orchard Books, illustrated by Mike Shenon) are meant to be told or read aloud like stories from the folk tradition. The text of Dark Cloud Strong Breeze, illustrated by Peter Catalanotto (Orchard, 1994), a rhythmic, circular tale for very young children, moves back and forth between the fanciful and the mundane, the wish-world and the everyday one. My chapter book, Maybe Yes, Maybe No, Maybe Maybe (Orchard, 1993) draws from my experiences as a middle sister.

(All these books are out of print, but Simon and Schuster/Atheneum will publish a new edition of Maybe Yes, Maybe No, Maybe Maybe in the next year or so.)

After that, the mid 1990’s, I hit a wall. I worked on various versions of what became The Higher Power of Lucky but couldn’t find the story’s heart until 2003. It was a painful interlude.

I began listening to lots of audio books. This gave me a better grasp of a novel’s form and helped me to “hear” my own writing.

How did your career as a public librarian inform your writing? Your insight into the world of publishing?

Before retiring this year, I worked as a specialist in children’s literature for nearly 35 years. It was deep immersion in the field, and included service on some book award committees, (Caldecott and the Laura Ingalls Wilder committees of the American Library Association; Patricia Beatty Committee of the California Library Association; PEN Literary Award Committee (juvenile/young adult category)).

The committee discussions with other librarians and writers called for deeper reading and thinking about books. It was good discipline for me as a writer.

I also trained new children’s librarians on the principles of intellectual freedom and freedom of access for children. This turned out to be useful when my own book came under fire because I knew the library profession would stand behind it, defending the right of young people to read it.

How have you grown as a writer? In what areas are you still striving to improve?

I thought it would get easier as I went along, but I’m still figuring out how a novel works. I feel myself groping in the dark, trying to find the key or the recipe or the formula. I have to learn everything all over again with each book.

Congratulations on winning the Newbery Medal for The Higher Power of Lucky (Atheneum/Richard Jackson, 2006)! For those who haven’t yet had a chance to read the book, could you tell us about the story?

Thank you! This is the story of ten-year-old Lucky, who has lost her mom and was abandoned by her dad. She lives in Hard Pan, California; population 43, the ward of a beautiful Frenchwoman. Worried that she’ll be sent to a foster home, Lucky eavesdrops on 12-step meetings in an effort to find her higher power.

This is the painful part. It took over ten years and many, many drafts. It was slow, plodding work and I couldn’t figure out why. When my mother died after a long illness it affected me in a way I couldn’t have predicted, and then I understood what Lucky was looking for.

The biggest challenge was one we all share: finding time to write. I was working full time, and tired at the end of the day. So I used weekends and vacations, trying to maintain the thread and stay in the story.

I notice that the book was published by Richard Jackson at Atheneum. Was he your editor on the manuscript? Could you describe your working relationship?

Richard Jackson has been the editor of all my books so far, and working with him is a writer’s dream. He’s kind, quirky, available, honest, and not afraid to take risks. I’m a fanatic self-editor and reviser and try to submit manuscripts that are as finished as possible, which meant that there weren’t many changes made afterwards. Dick retired, so I’m working with the brilliant Ginee Seo at Atheneum on my current project.

Could you tell us about the day you found out you’d won the award? Did you have an inkling (from reviews, buzz, Mock Newbery events), or did it come as a complete surprise?

Lucky was published in November of 2006, and as far as I could tell, almost no one was reading it. No buzz, no Mock Newbery inclusion, no listserv discussion, only a couple of reviews as of the end of January when the awards are announced.

As a matter of fact, I’d become depressed about writing and was ready to send back the advance for the sequel because I figured, why would anyone want to read the sequel of a book they’d never heard of? So the Newbery phone call was an enormous, surreal, heart-stopping surprise.

I’ve mentored a handful of beginning writers, and I’ve been told more than once that they wish they could attain a certain level of fame or literary recognition if only so their self-doubt and anxiety will go away. Does it work this way?

Richard Jackson told me years ago that the hardest book to write is the one following a major award.

Privately I thought, okay, right, if you say so. Hey, I’d be willing to risk that–just give me a shot at it. Such validation from peers would surely provide enough ammo to counter those terrible self-doubts and fears.

But of course he was right: the anxiety shifts in a different direction, but is still present and even more intense.

You’ve had opportunities to respond to critics who objected to your use of the word “scrotum” in Lucky. I wonder if instead you could speak to writers. It seems to me that more and more are feeling the pressure to self-censor, to use the next most evocative word or plot twist in an effort to make sure their work reaches young readers. What do you say to them?

As I commented recently in the current issue of the SCBWI Bulletin, We writers choose each word with care so that it conveys our specific meaning, mood, emphasis, style, etc. And we write with respect for the reader’s intelligence.

We’re doomed if we permit the specter of censors or critics to enter our creative process. We must not let those crows of fear caw into our ears as we write, or we won’t hear the genuine inner voice that we need to access in order to write honestly and well. Writers who believe that readers live in the same world we do must ignore those efforts to suck the life out of literature.

More globally, if you could go back and talk to yourself when you were beginning writer, what advice would you offer?

For a long time, I read very little YA fiction because my job specialty was children’s lit and I needed to read as much of that as I could.

When I retired this year, I finally felt free to try other levels and genres. I started with Sonya Sones, John Green, Roddy Doyle, and Chris Crutcher. Then I couldn’t stop; the YA field is incredibly dynamic, with superb writers. (Just now I returned from picking up Tantalize at the library.)

So my advice would be to read widely, dipping your literary toes in many different bodies of water, even ones you think you won’t like. It’s very refreshing.

I’m just finishing the revisions to a sequel to The Higher Power of Lucky. Pub date is early 2009.

My husband and I like to spend time in the Eastern Sierras, where we have a cabin.

We get into a variety of cooking projects—once we spent five days making an authentic cassoulet.

I also have a sort of ongoing long-range project, a gigantic wall mosaic using capsules, those little metal caps on top of the corks in champagne bottles.