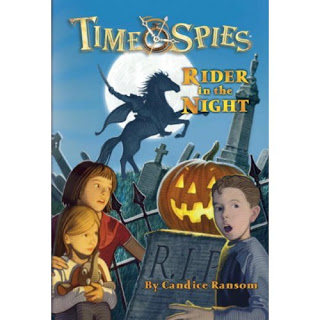 Candice Ransom on Candice Ransom: “I was born in Washington, D.C., but grew up in Virginia. Many of my books are set in my home state. I’ve been married to Frank Ransom nearly 30 years. We live in Fredericksburg, Virginia, with three cats, including the notorious Winchester, who co-stars in ‘Ellsworth’s Journal,’, the only blog by a stuffed elephant and a cat.

“I have an MFA in writing for children (Vermont College, ’04) and a MA in children’s literature (Hollins University, ’07).”

I started down that path as a fifteen-year-old eager to make children’s books. My first book, I was sure, would be deemed a classic and sit on the shelf next to Charlotte’s Web. I submitted “Mystery of the Hidden Carousel” to Harper, and a picture book about a mouse (text and colored pen drawings on the same page) to Whitman. The mystery came back with tire tracks across the envelope. The picture book disappeared down a mouse hole.

I always tell new writers, go through whatever door opens for you. The door that opened for me was not a hardcover novel or a picture book but original paperback fiction.

The Silvery Past (Scholastic, 1982) was romantic suspense about an old carousel! (Later, I was published by both HarperCollins and Albert Whitman.) I continued writing original paperbacks. Eventually, the hardcover door opened, the picture book door opened, and others. Those doors did not swing wide for me–I had to knock hard to get in!

Early on I was asked to write the launch titles for various series. I realized that I was prolific and that my journey would be different from a lot of children’s authors. My book count currently stands at 110. Most of the time I’m focused on the project(s) at hand, but when I think about that number, it’s like, “Whoa! How’d that happen?”

For one thing, I’ve been writing children’s books full-time for 25 years, writing and publishing four to six books a year. Sprints or stumbles? More like a marathon, with no finish line in sight.

For those new to your work, could you briefly update us on your backlist, highlighting as you see fit?

I’m embarrassed to say I can’t even remember most of my books (but then I can’t remember last week, either). Also a great many of my books are out of print.

The Big Green Pocketbook is my best-known picture book. When Laura Geringer, my editor, told me Felicia Bond agreed to illustrate it, I didn’t even know who she was!

I’ve ghosted 18 Boxcar Children books (this will be on my tombstone).

I’m proud of a nonfiction photo essay book called Children of the Civil War (when the editor asked me to do this, I said, “You want me to write about the whole war?”)

My latest novel is Seeing Sky-Blue Pink (Carolrhoda, 2007). Of all the books I’ve written, this one sailed straight from my heart.

Congratulations on the publication of Rider in the Night (Mirrorstone, 2007) from the Time Spies series! Could you give us an overview of the series’ premise?

Mattie, Alex, and Sophie Chapman move from the Maryland suburbs to the Virginia countryside where their parents have opened a bed and breakfast. The old Gray Horse Inn dates back before the Revolutionary War. The kids think they will die of boredom, but they find a secret room in the tower. In an old desk they discover a magic spyglass that transports them to little-known events in American history or trips through American literature. Because the inn is near Monticello, Jeffersonian themes tie the books together.

What was your initial inspiration for writing these books?

When I was a kid, I adored books featuring “everyday” magic, the type of magic that seemed within reach. It wasn’t likely I would find myself in Middle Earth, but it maybe I could find a magic ring. Time Spies is a Valentine to the books of Edward Eager, Jane Langton, and E. Nesbit.

What was the timeline between spark and first publication, and what were the major events along the way?

In late 2004 my editor, Nina Hess, and I discussed the possibility of a chapter book series that involved time travel. In early 2005, I wrote a short proposal. Nina liked it, but that was only the beginning of a long process.

One hurdle was finding a “clear” series name. Nina sent me lots of suggestions, but we both liked Time Spies best.

In my original proposal, the kids used a kaleidoscope to travel in time. Somewhere along the way—possibly during the name search—the kaleidoscope became a spyglass.

A few months after I signed the contract for the four-book series, it was decided that ten books would be a more significant launch and another six titles were added to my contract. Suddenly, I was very busy!

What were the challenges (literary, research, psychological, and logistical) in bringing the series to life?

The first four books ran too long. Also, we decided to alternate lead character POV between Mattie and Alex. It takes me a while to adjust from book to book. Even though I know the characters well, I identify more with Mattie. I also have to rein in the youngest character, Sophie, who speaks little but has a special gift. Sometimes she thinks she’s the star!

Believe it or not, I would have read more. I’ve always read a ton—arm loads of picture books when I was writing picture books, etc. But I missed a lot of classics. I didn’t read The Secret Garden until graduate school. I skipped a lot of older Newbery winners and books from the 30s and 40s. If I had had a firm literature foundation, maybe I wouldn’t have struggled so much with plot, character development, and theme.

How about writing related to time travel?

Pay attention to clothes! Modern stuff! If your characters move from a contemporary setting to the past, you have to consider what your modern kids will look like in the historic setting. If your character carries something modern (like a flashlight) back in time, keep it hidden or figure out a way to work it into the plot. This sounds obvious, but it’s trickier than you think.

Do you have any special words of wisdom for series writers?

Be flexible. Be willing to work with your editor. Create a “bible” for your series, but realize it may change. There are a lot of elements to juggle in a series. Don’t trust your memory to anything–write it down!

Sleep! I also enjoy paper-crafting, which is an offshoot of scrapbooking. I like making collages and altered projects related to classic children’s books. Even in my spare time, I don’t stray far from the world of children’s literature. It’s my life!

This is truly the hardest part of the job, which is a shame because it’s also the most fun. When I was earning my degrees, I had to skip some promoting.

Even now, I am choosy about speaking engagements. Sometimes you simply can’t do everything.

In order to fit it all in, I have a fairly strict schedule. I don’t watch television. I don’t go to the movies. I have no social life. Weekends are devoted to writing business.

Do I sound whiny? I don’t mean to. I’m only trying to stress the reality of the job. If you are in this for the long haul, if you want to earn a living from children’s books, you will have to give up things. It’s less a balancing act than a lifestyle choice. You do what must be done for your books, for your career.

I have a lot of books coming out in the next year or so. Pony Island, my first nonfiction picture book, with pictures by Wade Zahares. A companion book to The Big Green Pocketbook, called The Old Blue Pick-up Truck, illustrations by Jenny Mattheson. Two historical easy readers will be released: Night of the Hurricane’s Fury and The Day of the Black Blizzard. A biography of Maggie Walker Lena will be out in fall 2008. Four new Time Spies titles are scheduled next year, and I’ve signed to do four more.

When I was breaking in the field thirty years ago, there were few resources. I joined SCBW [same organization as SCBWI before the “I” was added] in 1977, but our region wasn’t active. I read The Horn Book (editor interview) and had a few books on writing for children and that was it.

Writers nowadays are so lucky! Even if you live on one of the Pribilof Islands, you can be connected by blogs, online courses, chat rooms, conferences, support groups. The community of children’s books writers and illustrators is vast and yet intimate at the same time. Take advantage of these wonderful resources. I still attend conferences in the hopes of learning something new. I plan to continue publishing children’s books for the next 25 years!