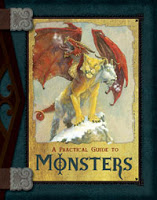 Nina Hess on Nina Hess: “I’m senior editor at Mirrorstone, an imprint of fantasy fiction for young readers which I launched at Wizards of the Coast in 2004. I’m also the author of A Practical Guide to Monsters (Mirrorstone, 2007) and Whose Feet? (Random House 2003). I’ve been a children’s book editor for almost ten years and a writer for as long as I can remember.”

My first book, written at age 8, was a picture book manuscript entitled “The Gingerbread People.” My mom gave it a rave review. I’ve always loved children’s books, and I secretly read them all through college.

After graduating, I found a way to take my secret reading habit and legitimize it by becoming an editorial assistant at Harcourt Children’s Books, working for Anne Davies. She taught me everything I know about children’s books.

Various circumstances brought me to Seattle years later, where I worked as an editor at Wright Group/McGraw-Hill, editing and writing early readers for the educational market. There I really cut my teeth on writing books for kids.

I also enrolled in a terrific Writing for Children class at the University of Washington taught by Kathryn Galbraith, Meg Lippert, and Laura Kvasnovsky (author-illustrator interview). In that class, I wrote an early reader called Whose Feet? which became my first trade book published by Random House in 2003.

Congratulations on the publication of A Practical Guide to Monsters (Mirrorstone, 2007)! Could you give us an overview of the book?

Thank you! The book covers all sorts of monsters, from the commonly known (and well-loved) vampires and werewolves, to mythological creatures like chimeras and medusas, to the more obscure creatures like beholders and otyughs. Those last two are some of my favorites in the book, because they’re simultaneously disgusting and cute! The beholder has eleven eyes, each with different powers, and the otyugh eats trash!

In 2003, I joined Wizards of the Coast to launch a new imprint of fantasy fiction for kids, which we named Mirrorstone. Wizards of the Coast has been publishing fantasy for adults for many, many years. But they are probably best known as the publisher of games, including the Dungeons & Dragons game.

In many ways Dungeons & Dragons is more than a game, it’s a guided storytelling session, and as a result, it’s full of some amazing fantasy lore and creatures. The game isn’t meant for a very young audience, but I thought young readers would adore a book about these creatures and all the intricate lore related to them.

So I proposed to our editorial director that we do a line of picture books for kids featuring all of these wonderful fantasy monsters.

The initial proposal, which we first talked about in 2003, was for one book on dragons followed by one on monsters. I signed up Lisa Trutkoff Trumbauer to write A Practical Guide to Dragons (Mirrorstone, 2006), and then our managing editor suggested that I write A Practical Guide to Monsters, partly because I had direct access to our vast monster library for research. (Yes, we really have a library in our office filled with monster resources!)

A Practical Guide to Dragons came out in October of 2006, and to the delight of everyone, it hit the New York Times best seller list a few weeks later. It stayed on the list for 14 weeks, which was a record for our company. By that time, I had finished writing the Monsters book and had handed it off to editor Stacy Whitman (editor interview), who worked with art director Kate Irwin, and book designer, Lisa Hanson, to turn the manuscript into a book (about a six month process). When the book hit the New York Times best seller list, we were all celebrating!

I worried about making sure the details were accurate. Even though it’s a fictional book, it’s presented as nonfiction. I consulted with our monster experts at Wizards, and did a lot of research to make sure the monsters felt “real” and stayed true to their origins.

We also had a relatively tight timeline to work with, and we weren’t able to publish the books early enough to secure advance review copies. But Random House is our distributor, and they were fans of the Practical Guide books from the very beginning. Their support really helped make the book a success.

What is it about monsters that’s so fascinating?

It’s probably partly the psychological function that Bruno Bettelheim talks about; I’m guessing that he would say that monsters and the stories surrounding them help children to process fears. Young readers who are a bit scared of monsters can find lots of useful information in A Practical Guide to Monsters for how to defend themselves that may help allay their fears.

But, really, people are probably fascinated by monsters because they are just plain fun. The book is filled with a huge diversity of monsters, with many different awesome powers that you can imagine you have. I mean, who wouldn’t enjoy imagining they’re a beholder, who can freeze people with their petrifying eye ray?

If you could go back and talk to yourself when you were beginning in this field, what advice would you offer?

On the writing side, I’m working on a bunch of picture book projects that have yet to see the light of day. Editing-wise, we’re launching the Supernatural Rubber Chicken series by D.L. Garfinkle (author interview), with illustrations by Ethan Long in June 2008 and I’m continuing to edit new books in the delightful Time Spies series by Candice Ransom.

2 Replies to “Author-Editor Interview: Nina Hess on A Practical Guide to Monsters”