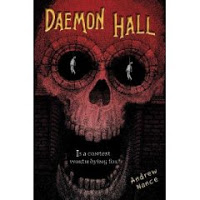 Andrew Nance on Andrew Nance: “I was born in Texas and raised in North Carolina. As a teen, I was pretty wild and had a bunch of good friends. I got into radio in my early twenties and worked up and down the east coast from Florida to Maine (I worked with Stephen King‘s sister-in-law, a newscaster, at a country station in Bangor).

“I was working at a small Florida station in 1983 when a competitor called me at home, wanting me to come right away for a job interview. I had been working on this old Harley Davidson I had at the time and was covered in grease, but they said that would be okay. So I went.

“I remember walking into the station, and there was this girl on the air–you could see her through the studio window–and I thought, Wow! She’s hot!

“I later learned that she took note of me, too. She saw me come in all covered in motorcycle grease, and turned to the person next to her and said, ‘Are we really going to hire that?’ I’d never been referred to as a ‘that’ before.

“But I got my revenge and married her several years later, heh-heh. She’s now a middle school drama teacher, and we have two teenage sons. I retired from radio in 2001 and have been focusing on my writing ever since.”

Daemon Hall started out as a short story collection. I’d written about half of the stories and was looking for a creative way to present them. I was talking it over with my oldest son; he was in the fifth or sixth grade at the time and had this Japanese candle holder that held about a dozen candles. So, we decided it’d be cool to get a group of tale-telling teens in a haunted house swapping stories, and, after each ,they’d blow out a candle until the final would be told in the dark.

When I finished the manuscript, I sent it out to various publishers and agents. Eventually, Paula Morrow at Carus Publishing asked me to do a rewrite on spec, but she wanted me to approach it not as a short story collection, but as a novel. When I finished, I really liked how it was evolving. Unfortunately, Carus decided to stop carrying YA titles, so I was once again adrift in the sea of unpublished authors (Isn’t that a Rick Riordan title–no wait that’s The Sea of Monsters).

It turned out to be for the best because after a year and half sitting on her slush pile, Christy Ottaviano at Henry Holt picked it up and liked it.

Before signing me, she put a challenge to me; do another rewrite and trim seventy-five pages in the process. Seventy-five! I didn’t think I could do it, but figured it would be good experience. She knew what she was talking about because it really was a much better book after that. So, now it’s out, and I’m crossing my fingers for good sales.

Congratulations on the release of Daemon Hall (Henry Holt, 2007)(excerpt)! Could you fill us in on the story?

A famous horror author for teens, Ian Tremblin, holds a short story writing contest for his readers. The winner will get a book publishing deal.

Tremblin selects five finalists, including the protagonist, Wade Reilly, and gathers them together for one night in Daemon Hall, a mansion that is rumored to be haunted. The plan is for them to tell stories all night, and Tremblin will pick a winner in the morning. Their only light source comes from nine candles.

After each story, they extinguish one candle, making the ambiance darker and even more sinister. Then things begin to occur in Daemon Hall, and they come to learn they’re not only telling horror stories, but they’re a part of one, as well.

We can go back decades for the initial inspiration. I grew up telling ghost stories. Whenever I had a babysitter, I took it as my personal goal to scare them so much that they’d beg me to quit telling stories. I usually succeeded.

But when I wanted to read a book that was scary (I’m talking back in the late sixties as a preteen and into the seventies as a teen), the selection was sadly lacking. Every time I tried a so-called horror for teens it suffered from either the Scooby-Doo Syndrome (not a real monster, but someone in costume) or the Casper Effect (not a terrifying ghost after all, but a friendly, misunderstood spook).

What I’m writing now is what I would liked to have read when I was a teen.

I’ve been very blessed in life and have enjoyed every stage of it. I particularly had a great time as a teenager, you know, good friends, getting a taste of freedom, always out there looking for adventure. I think that mindset just sort of stuck with me (my wife calls it “arrested development”).

I do a lot with teens: working with the youth group from my church; helping my wife, who is a middle school drama teacher; taking school groups on ghost tours. Like most YA writers, I have a great deal of respect for teens.

You know what? I’d go back to when I was a teenager trying to figure out what to do with my life. I eventually got into radio, which is a fun profession, but I didn’t love it. I kind of fell into it because I have a good voice, sense of humor, and musical knowledge.

My dad always told me I could do whatever I wanted, but deep down I didn’t believe him. I didn’t realize he was right until just a few years ago. So maybe it was a delayed start, but I’m finally pursuing my dream. I hope any teens who read this will take it as a lesson to follow their passion.

What would you say specifically on the topic of writing horror?

Horror is the ultimate in good versus evil. It’s natural to focus on the terrible, frightening stuff that goes on. But if you look closely at horror stories that really connect, they’re about normal, everyday people (like us) who find themselves in incredible and terrible situations. They have to find courage and strength within themselves to fight back, so that, hopefully, good will triumph.

The fact that the good guys don’t always win is another reason horror can be so compelling–you just never know until that last page.

When writing, I pay particular attention to pacing. The suspense shouldn’t build too fast–or too slowly for that matter. As for the narrative, I want readers to see what is happening in their minds. I’ve had several people say, “When I read it I thought this would make a great movie.” Hopefully that means they’re seeing it as they read it.

Horror also needs occasional surprises, something that makes the reader stop for a moment and say, “Where the heck did that come from?”

Which books would you suggest for study and why?

I wish I could be unique and pull out some obscure title but, as most writers would tell you; Stephen King‘s On Writing (2000) and The Elements of Style by Strunk and White need to be the first two books in any writing library. I think King could write a restaurant menu and make it a compelling read, he certainly did so with a how-to-write book. It’s not only entertaining and informative, but every time I read it, my battery gets charged up and I’m eager to get back to the keyboard.

Barbara Seuling‘s How to Write a Children’s Book and Get it Published (2004) is a good read for someone just starting the journey into the jungle we call children’s publishing. It’s simple and straightforward and tells you what you need to do after writing the book and how to go about doing it.

My family is very active in our church. In fact, faith and family are the things that helped me most on the road to getting published.

St. Augustine, Florida is a wonderful historic town and I do some tourist related work which includes playing a pirate captain on the schooner Freedom, a big beautiful ship. Flagler College, a liberal arts college in town, has a respected communications department, and I use my experience to volunteer at their radio station. I sometimes work with students, but mainly I’m the jazz music director and have a weekly airshift.

Theater is a whole lot of fun and I find myself on stage in local productions from time to time.

What else? I like motorcycles, scuba diving, tattoos, golf, and poker. Oh, and as a tie in to Daemon Hall, I do, on occasion, take part in paranormal investigations.

Another paranormal adventure with Wade, Demarius, and Ian Tremblin is in the works.

After that, I’m not sure. I do have three other manuscripts that are completed for the most part. Two are horror and one I wrote for my drama teacher wife, so it deals with a school musical production.

As for my immediate plans, I’m going to the beach with my copy of your book, Tantalize (Candlewick, 2007). I’m about fifty pages from the end–what a great summer read.