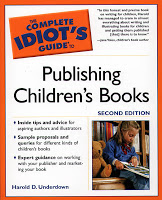 Harold Underdown on Harold Underdown: “I was born in Sewanee, Tennessee, home of the University of the South, and my family moved around on the East Coast as my dad moved into different jobs in his field–English History. I’m the oldest of three boys.

“We also spent one year and some summers in England, and I read a lot, both US and UK authors. See The Editor as Reader, on my site, which goes into my childhood reading in more detail.

“I was an English major in college, but did not go straight into publishing, unlike many editors. I taught and did social work before deciding that being involved in making books was something that appealed to me.”

Could you fill us in on your experience as a children’s book editor?

I started out at Macmillan Children’s Books, nearly twenty years ago, as an assistant. Macmillan at that time was a large, general-purpose imprint with a long history, that published everything from reference books for children to the youngest picture books. Good mentors there–Neal Porter, Judith Whipple, Beverly Reingold. I worked there for a few years, and then at Orchard, got downsized, freelanced for a while, and then had a great job at Charlesbridge as senior editor and then editorial director.

The only problem with that wonderful job at Charlesbridge was that I was commuting to Boston from Brooklyn, and I left that job so that my wife and I could start a family. I worked for a start-up children’s ebook company until it went bankrupt, and since then have returned to freelancing, doing projects both for individuals and publishing companies.

See a list, somewhat out-of-date, of some of the books I’ve edited.

You’re also the author of The Complete Idiot’s Guide to Publishing Children’s Books (Second Edition)(Alpha, 2004)! What was your initial inspiration for writing this title?

The inspiration wasn’t mine, actually! I was contacted by an editor from the company that publishes the Idiot’s Guides. They had done a guide on publishing in general, and after they succeed with a broad subject they often publish guides on smaller parts of that wider topic. Once they come up with a subject, the find someone who they think can write about it. I believe that they found me through The Purple Crayon, saw that I was already providing basic information about children’s publishing, and thought I’d be a good match.

By the time the Idiot’s editor contacted me, they were already running late–the book was on their schedule for early spring 2001 and she first emailed me in late March of 2000!

Once we sorted out the contract, the first major event was the outline. This is standard procedure for these guides. The author does a detailed outline–in my case over ten pages long–which becomes the blueprint for the book. And then my coauthor and I just wrote. it was all done electronically. We started writing in May, and finished the manuscript by the beginning of November. And the book was on sale by February 2001.

The second edition was not quite as hectic.

One big challenge for me was just finding time to write! I was working at Charlesbridge at the time. I wrote in the evenings. I wrote all weekend.

Writing fast was also a challenge for me. I don’t write fast, usually. But having the outline helped. Some of the chapters were about things I do every day, and I could almost write them straight from the outline. Others did require research and anecdote gathering but I knew where to go to gather the information I needed.

Perhaps the biggest challenge, though, was believing that I could write a 300-page book, since I’d never written anything anywhere near that length before. The Idiots provided a co-author, who drafted some of the chapters, and that did help, but since she wasn’t as familiar with the field as I am I still had to review everything.

What advice do you have for beginning children’s book writers?

Well, they’ll find a lot on The Purple Crayon, but here are a few key points:

–Understand that it will take time and persistence to get anywhere. Be ready to stick it out.

–Join the SCBWI. Go to a local conference. Get to know other writers. It helps enormously to have a support network.

–Write, write, and write some more. Don’t accept “good enough.” Get your writing critiqued by a pro at a conference or elsewhere before deciding it’s ready to be sent in.

–Get three books to start your writing shelf: a market guide, a writer’s “how-to,” and a guide to the business such as my book.

–Read lots of recently published books to get a sense of what’s being published today in the market.

How about those authors building a career?

Now, that’s hard. I don’t think there’s even one piece of advice that will apply to everyone in that situation. But here is something worth keeping in mind: you’re a professional writer, and don’t let anyone treat you as anything less.

You’re the creator of The Purple Crayon, a site dedicated to writing, illustrating, and publishing children’s books. For those new to it, could you give us an overview?

The site consists mostly of articles I’ve written or that have been contributed. These are organized by subject matter, from Basics to Writing, on about a dozen index pages (all listed here: http://www.underdown.org/articles.htm). I also have a blog, a publishing glossary (from my Idiot’s Guide), some interviews, some book reviews, a section about award-winning children’s books, information about my editorial services, and some links pages, but the articles are the core of the site.

How did the site evolve?

That’s a long story. It’s been around since the early years of the Web. I started it with some links and a few articles and presentations that I converted to HTML, and it’s just grown since then. People ask questions, and sometimes an article comes out of that, or someone sends me an article on a topic that the site doesn’t cover. So I’ve just kept adding, and occasionally reorganizing.

As a children’s literature person, what else do you do? Other hats do you wear?

Gee, isn’t three hats enough? Well, I haven’t said much about my work as an editorial freelancer and consultant, actually. The Purple Crayon and The Idiot’s Guide are not my full-time work. Editing is. I do everything from picture book critiques to editing and project managing teacher’s editions of textbooks.

Also, I speak at conferences, which I enjoy.

What do you do outside of the book world?

I try to make sure my family is happy. We have a child in kindergarten, who over the past several months has learned to read, mostly on her own initiative. I stay involved with that. It’s satisfying and challenging and nothing at all like any job I’ve ever had.

In case you’re wondering, being a father hasn’t changed how I approach my work as an editor. I’ve greatly enjoyed discovering books I didn’t know about, though, and re-discovering favorites from my childhood. The Editor as Reader, which I mentioned earlier, goes into some of the discoveries.

What can we expect from you next?

Eventually, I’ll be back in an acquiring position at a publisher. That could happen tomorrow or five years from now.

And you can expect a new edition of my Idiot’s Guide. I’ll announce details on my web site and via an email newsletter I put out occasionally.