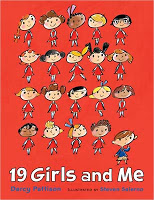 Darcy is also widely published in periodicals, usually writing about quilting or creative writing. Darcy holds an M.A. from Kansas State University and a B.A. from the University of Arkansas. Currently she is an Adjunct Professor teaching Freshman Composition, Introduction to Creative Writing, and Creative Writing for Children at the University of Central Arkansas, Conway, AR. She travels throughout the U.S. teaching the Darcy Pattison Novel Revision Retreat.

Darcy Pattison on Darcy Pattison: “I grew up on a 1000-acre ranch, 100 miles north of Albuquerque, New Mexico in the Jemez Mountains. I am fifth out of seven children. That background of the ranching life and being in the middle of a large family seems to be a thread through much of what I write.”

The Journey of Oliver K. Woodman (Harcourt) is my most popular picture book to date. It’s about a wooden man who crosses the country to connect a family. I didn’t consciously do it, but most of my books have some sort of travel; maps seem to be important in my inspiration process, even though I’m not a good navigator when we travel.

My current picturebook, 19 Girls and Me (Philomel), is most often cited as a favorite read-aloud. It’s about friendship in a kindergarten classroom with 19 girls and one lone boy. The “high concept” helped the book, but I also worked hard on the language. Teachers tell me that kids request it over and over–and they don’t mind, because it’s fun to read aloud.

You are one of the author-teachers associated with Novel Secrets: A Novel Retreat in 3 Acts, and your focus will be revising a novel. Could you tell us more about that?

One participant in a recent Novel Revision Retreat said, “This was an amazing workshop that has me actually excited about revising already revised stories.”

Another said, “My revised chapter has moved from nice to richer, deeper, funnier. And the finest part is that I feel so empowered – like I have the tools to make my writing the writing of my dreams, the writing I love to read. It is wildly exciting.”

After twelve years as the conference director for the Arkansas chapter of the Society of Children’s Bookwriters and Illustrators (SCBWI), I realized that the hardest thing to get help with is a novel. Most conferences are one-day events in which many different topics are covered briefly. Yet, year after year, someone would hold out a novel and ask, “What do you think of this?”

Author Nancy Sharp had wanted to host my retreat, but at a conference, she had a brainstorm to create three linked retreats in which a novel would be taken from conception, through a first draft, a major revision and then marketing. I thought it was a fantastic opportunity for writers who were willing to take the leap.

Will you be lecturing, offering writing exercises, critiquing?

Each participant receives a 75+ page workbook to accompany lectures. Brief lectures are followed by time to work on your own novel, then reinforced by group discussions.

Here’s some comments from participants about the different sessions of the retreat:
Inventory Session:

“Maybe the most helpful part. From the moment I started filling the worksheet out, I knew I was in trouble.”

“I will use this tool for all projects.”

“Coming in, I had the book knowledge about plots, subplots, climax…but this workshop put it all into a working perspective. Something I could grab hold of. Exercises forced me to look at things I was avoiding.”

“It was a more enhanced description of plotting than I have ever seen.”

“Very helpful. I already thought I was employing sensory details, but now I have a clearer picture of what I need to be doing.”

“A jewel! I wish someone had explained ‘show don’t tell’ in terms of sensory details language.”

“I’m looking forward to using the checklists on all my characters.”

“Helped me give more dimension to weaker characters.”

“Helpful because I learned to connect this to the characters’ emotional journey in a scene rather than just through something on the page.”

“Again–I learned to think of this in a new way.”

“Helped me see beyond the meaning of words–a new concept.”

“This was excellent–deep, powerful, something I’ll always use now.”

“The narrative patterning, imagery and epiphany sections were especially wonderful. I’ve never met a writing teacher who was willing to tackle these head on.”

“Word list approach very helpful, real graphic. Something I can wrap my hands around.”

“As a whole–these exercises were brilliant because they helped me see how each aspect of novel writing connects to or is attached to the other.”

“The workbook is one of the most useful things I’ll take away.”

“You made things we already knew into a tool instead of a concept.”

“I think I’ll look back on this weekend as a turning point in my growth as a novelist. I wish we could do this every year!”

I’ve posted on my blog an interview with Kirby Larson about the revision story for her 2007 Newbery Honor book, Hattie’s Big Sky. An exercise that helped her was the Shrunken Manuscript exercise. Basically, you single space a manuscript and then shrink the manuscript to a small font and print it out. This allows you to mark and see the overall structure of a long story like a novel.