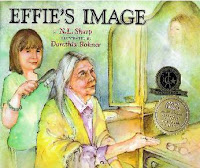 N.L. Sharp on N.L. Sharp: “I am married to Larry and am the mother of three sons and one daughter-in-law. I am a former elementary teacher (grades K-3) as well as library media specialist and elementary reading/writing consultant. I am currently taking some time away from the classroom to concentrate on my writing career.”

I have known since second grade that I wanted to be a writer. I was born in Valentine, Nebraska, and attended a one-room country school, located two miles from the South Dakota border. My favorite time of the day was when my teacher would read to us. I still remember many of the books that she read–Mr. Popper’s Penguins, Brighty of Grand Canyon, The House of Sixty Fathers.

But when I was in second grade, our teacher read the book that changed my life. She read The Little House on the Prairie. And I realized, for the very first time, that anyone can be a writer. You don’t have to be smart and write about things I know nothing about, like penguins, or travel to exotic places, like the Grand Canyon, or have lived through a horrific experience, like war.

You can be a kid from an ordinary place like Nebraska or South Dakota and write about ordinary things like your mom and your dad and your brothers and sisters, and you can be a writer. So I have been writing “Nancy” stories since about second or third grade–although I didn’t try to get any of them published until well into my adult years.

Could you briefly summarize your back list, highlighting as you see fit?

I am the author of three picture books.

My most recent book is Effie’s Image, illustrated by Dorothia Rohner (Prairieland Press, 2005). It was selected by Learning Magazine as a 2006 Teachers’ Choice award winner and is on Nebraska’s Golden Sower list for 2007-2008.

My two other titles are: Today I’m Going Fishing with My Dad, illustrated by Chris Demarest (Boyds Mills Press, 1993) and The Ring Bear, illustrated by Michael Hassler (Dageforde Publishing, 2003).

You are the mastermind behind Novel Secrets: A Novel Retreat in 3 Acts. Could you give us a brief overview of the program?

I would love to. Basically, this series consists of three individual retreat weekends that will occur in the span of one-year’s time. The intent of this series is to help the writer move from the first inklings of an idea toward a publishable novel in twelve intensive months. The retreats are designed for maximum participation and advance preparation for each one is required.

The first retreat, scheduled from Thursday, October 25 to Saturday, October 27, 2007, will be led by Elaine Marie Alphin, and will focus on brainstorming techniques related to plotting, character development, and pacing. We will leave this retreat with a basic outline and a plan for turning that outline into a novel.

The requirement to attend Retreat 1: Read Elaine’s book, Creating Characters Kids Will Love, published by Writers’ Digest Books. Elaine is the author of more than twenty published books for children and young adult readers, many of them award-winners.

The second retreat, scheduled from Friday, April 4 to Sunday, April 6, 2008, will be led by Darcy Pattison. The goal of this retreat is that every author will go home with strategies and tools for revising their novels.

Requirements to attend Retreat 2: 1) have a completed draft of a novel, 2) submit four copies of that manuscript to be read by three other members of the Retreat 3) agree to read three other drafts of novels before the retreat, and 4) read Self Editing for Fiction Writers by Renni Browne & Dave King and The First Five Pages by Noah Lukeman.

Darcy Pattison served as the Arkansas Regional Advisor for the SCBWI from 1991-96. In 1999, Darcy created the Novel Revision Retreat, which she now teaches nationwide.

The final retreat is scheduled from Friday, October 24 to Sunday, October 26, 2008, and will be led by Alexandra Penfold, an editor at Simon and Schuster and Rebecca Sherman, a senior agent at Writers House Literary Agency. The focus for this retreat will be marketing strategies and submission secrets. We will also discuss the process of letting go of this novel and starting again with a new project.

Requirements to attend Retreat 3: 1) Attend at least one of the other two retreats, 2) Read the book Art and Fear by David Bayles, and 3) Submit a cover letter, a synopsis of your novel, and the first three chapters for critique by either Alexandra or Rebecca.

What inspired you to initiate this effort?

I have a draft of a novel that I have been playing with for several years. I contacted Darcy Pattison about her Revision Retreat with the idea that, perhaps, we could offer that retreat in Nebraska. But, as you can see, one of the requirements to attend Darcy’s retreat is that you have a novel written. In order to offer this in our area, I needed to find eight-to-twelve people that met that requirement. And I was struggling to do so. I spoke with several people who were interested in writing novels–but few that actually had a novel written.

Then, this fall,I attended an SCBWI-sponsored conference in North Dakota where Elaine Alphin was speaking. She did a two-hour brainstorming session with us, focused on character development and plotting. After the session, I asked Elaine if she would be interested in expanding that session to an entire weekend. It was my idea, at that time, to offer the retreats as a two-weekend series. The first retreat would be designed for getting us started (creating a plan to move the novel from an idea to a finished draft). The second retreat, held six-to-eight months later, would provide us with the tools to revise that novel.

As we were discussing the possibilities for such a retreat series, editor Alexandra Penfold, another conference speaker, joined us. We shared our vision with her, and soon the two-weekend retreat became a three-weekend retreat. We felt like offering participants the opportunity to have their manuscript packages critiqued by an editor would encourage participants to leave Darcy’s retreat with not only the tools they need to revise their manuscripts, but the incentive to do so.

After I returned home and began to work on the specific details regarding these retreats, I began to think about the third retreat more and more. I wanted to make it more than just a “critique” weekend. I also felt like I was asking a lot from Alexandra–to critique all of our manuscripts, plus be our presenter for the entire weekend. I contacted her and asked what she thought about inviting an agent to share those duties with her for that Retreat, and if she had anyone in mind that she thought might be interested. She suggested Rebecca Sherman from Writers House.

Why did you think there was a particular need for a program structured this way?

I don’t know that I actually thought about the need for this program in terms of others. I just know that I work best when there is lesson presented, an assignment given, and a realistic deadline for completing that assignment. And if I can do this in a group setting, so that I can bounce ideas and gain support from others, I am more likely to meet that deadline with a project that I am proud to call my own.

I believe that this series will provide me with the structure that I, personally, need to get my novel writing back on track. If I can find eleven to twenty-three other like-minded individuals who are willing to take this journey with me, then I will be thrilled, and all of the work I’ve done organizing the Retreats will be well worth my time.

What are the pros of Novel Secrets versus other craft-development opportunities?

Well, first of all, we have the opportunity to meet and work with four wonderful writing teachers–Elaine, Darcy, Alexandra, and Rebecca. We have a deadline–and the opportunity at the end of that deadline to have our novel professionally critiqued by either an editor or an agent. But, more than that, we have the opportunity to network and share our struggles with other committed and like-minded individuals–all working toward the same goal–crafting a novel in a year’s time. And, by including the reading and discussion of books on the craft of writing as a part of our process, we will all have the opportunity to take our writing up a notch, from whatever level we are right now.

Could you describe the setting and facilities?

All of the Novel Retreats will be held at the St. Benedict Retreat Center, a retreat and conference center located on Highway 15 north of Schuyler, Nebraska, approximately 70 miles from Omaha, Nebraska. It is truly an inspiring place to relax, regenerate your batteries, and focus on your career. The Center provides several peaceful and quiet spaces for writing and quiet reflection, including a man-made lake and surrounding park, a solarium with a fireplace and small library, and an amphitheater.

Each participant will have his or her own private room with bathroom. Meals and lodging are included in the cost. All rooms are fully air conditioned and have private bathrooms. An exercise room is also available. The Center is a smoke free environment. For additional information or to see pictures of the facilities, you may visit their website at: http://www.stbenedictcenter.com/

Is there anything else we should know?

Openings are limited. The minimum number of participants required to run each retreat will be twelve, and our maximum will be twenty-four. Priority will be given to those individuals who register for all three retreats at one time. Also, if a participant is a published author already and would like to do a school visit while in Nebraska to help off-set the cost of the retreats, just let me know. I can’t guarantee school visits, but I am working with a bookstore owner in Omaha, and we will do our best to make that happen for anyone who is interested in that particular opportunity.

There is additional information about the retreats, including sample schedules, at my website: http://www.nlsharp.com/

If you have other questions, please feel free to contact me directly: nlsharpwriter@yahoo.com

I’d love to hear from you!