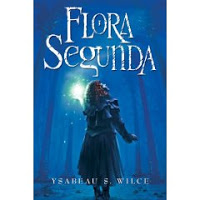 Ysabeau S. Wilce on Ysabeau S. Wilce: “Ysabeau S. Wilce was born in Northern California and, though she has traveled the world, considers herself a Californian still. After being trained as a historian, she turned to fiction when the truth no longer compared to the shining lies of her imagination. She’s published in both boring scholarly journals and in exciting fiction magazines and is equally proud of both. Ysabeau lives in the Middle West, with her husband, a cheese-swilling financier, and a border collie named Bothwell. They do not have a butler!”

I’ve always been drawn to making things up, and if you don’t write down the things you make up, they’ve got no sense of permanence. And I was also drawn to a sense of permanence, hence: writing! But although I’ve been writing down stories for years and years, it was only about five years ago that I decided to try fiction professionally.

I’ve got a degree in history and was working as historian, but as much as I loved researching and writing factual pieces, it was hard sometimes not to drift into “what if…” But historians must (for the most part) shun such thoughts.

So I decided to look at history through the prism of my imagination, and Califa was born. So far all my fiction has taken place in this tiny country. Califa is not supposed to be an alternative history of any one place, but I’ve drawn from a lot of historical detail, as least as far as material culture goes. Once I decided to try to write professionally, I was very lucky how quickly I was able to proceed.

I wanted to write the kind of book that I would have liked to have read when I was young. Of course, there were many books I read when I was young that I loved–but in my hubris, I thought that maybe I could add something to genre, something that girls like me would like. And I was a pretty weird girl! I had a young reviewer comment that she thought Flora Segunda was a book for weird kids, and I felt very satisfied with this compliment!

I was pretty lucky. The first publishing event I went to (a retreat sponsored by the Society of Children’s Book Writers & Illustrators (www.scwbi.org), I met a very kind editor who took an interest in my rough draft of “Flora Segunda.” He asked for a submission, and then a rewrite, and then bought the rewrite.

The only hitch in my git-along was that towards the end of the final edit process, the acquiring editor decamped for another publisher, leaving me behind. It took some time to get me a new editor, who, lucky for me, was just as fabulous as the first!

Another thing that was very helpful in my journey was attending Clarion West in 2002. Clarion West (www.clarionwest.org) is a six-week long residential writer’s workshop held in Seattle. It’s a chance to work with professional in the field, and to do nothing but write for six weeks. I made great contacts there, had a fabulous time, learned a ton of stuff, and met my husband there! It was a very worthwhile experience and I urge anyone thinking of making a career in SF/F (adult or YA) to consider applying to Clarion. It’s a once in a life-time experience.

Congratulations on the publication of Flora Segunda: Being the Magickal Mishaps of a Girl of Spirit, Her Glass-Gazing Sidekick, Two Ominous Butlers (One Blue), a House with Eleven Thousand Rooms, and a Red Dog (Harcourt, 2007)(excerpt)! What was your initial inspiration for this book?

Well, I rather made it up as I went along. The only clear thoughts I had in mind when I was writing the first draft was that I wanted to write about a cranky girl, and I wanted to try to capture the feeling that you have when you are kid and everything seems so super important, and yet the adults around you are oblivious to this. When you are a kid, everything can feel so super-charged, and yet as adults we forget this and figure that nothing in a kid’s life can possibly be that important.

I had already written several stories that took place in Califa, but with other characters. I’d never met Flora until I started writing, and it look me several chapters to figure her out. But her voice came through so strongly that even from the first she seemed like a real person, with a great story to tell. The book is really her accomplishment; I was just the secretary!

Well, I wrote the first draft in two weeks. Lots of coffee, no sleep! Then I wrote drafts of Book 2 & 3 in about two months. Then, about six months later, I went to the SCBWI conference. From initial submission to rewrite was about a year. Then another six months to an offer, and another six months to contract. Then, alas, almost three years to actual publication. So, about five years total. It’s a long process–I didn’t realize that when I started! Somehow you think once the book is bought it will magically appear on the shelves in six months! Alas, no. Tho’ from what I understand, my situation was a bit prolonged because I had the editorial switch in the middle. The journey of “Flora Redux” will be much shorter.

The biggest challenge I had was sticking to Flora’s voice, while making sure that subtleties of her inner life came through. Flora talks a lot, but she doesn’t always say what she’s truly feeling, which can be a problem in a first person point of view (POV) book. There many times I wished I had not written the book in first person!

It would have been easier to have lots of exposition (“And now Flora wished she’d never eaten that last cupcake…”) than to try to communicate that Flora wished she hadn’t eaten that last cupcake, when she’s too proud to admit that fact out right. Lots of first person POV often falls into exposition (“Oh, how I wished I hadn’t eaten that last cupcake!”) and sometimes it works, but other times it’s too fake. After all–how many times do we stand in front of a mirror and describe ourselves out loud, yet this is a common scene in many first person books. So, trying to convey information without seeming too out of character was hard. You have to get readers to read through the lines, and thanks tricky.

My second huge challenge was that the first draft was much shorter than the final. Originally, the book was very straight forward in its plot. But my first editor really felt that to get a true feeling of the characters and the world, the book needed to be longer–“breathe” as he called it–so I had to add about 40,000 words. Which is a lot of words!

Trying to retro fit a new plot-line (which turned out to be the Dainty Pirate) without making the book appear to be pieced together or starting completely over was a challenge. But thanks to editorial advice I think I pulled it off! The irony is that usually I write very long, and trying to make the first draft short had been quite an effort. I’ve had some feedback that the plot is a bit too convoluted in places, but I like that–life is convoluted and roads are rarely straight. And though Flora Segunda is a novel, it was important to me that Flora and her world feel real. Hence, Flora’s journey must be complicated and full of surprise.

The feeling that they were entertained, and that Flora and Califa seemed real. And that they’d like to know more about both.

Keep writing. And read everything you can get your hands on, from newspapers to novels. Try to make sure you leaven the good stuff with the bad–it’s as important to see how you shouldn’t do it as to how you should.

Don’t be afraid to branch out–even if you think you don’t like mysteries (for example) try one anyway. Every book is different, and they can all teach you something.

Also, read old books–not necessarily classics, but writers that people have forgotten today like Edna Ferber, Norah Lofts, and James Branch Cabell. All three of these writers were great storytellers and big names in their day, but no one remembers them now. Still, they have a lot to say about how to construct a great story and fabulous characters and their writing styles, though wildly different, have a fluidity that is harder to find today.

How about for fantasy novelists specifically?

Ditto above. In fact, I think it’s more important for fantasy novelists to read outside of the fantasy genre. If you stick to your own genre only, you risk becoming insular. And great fantasy is, oddly enough, realistic, so it behooves you to read broadly. I think sometimes genre writers can get so engrossed in the genre elements (the fantasy, the SF, or even the mystery) that they short-change the characters and the story. Yet it is the realistic elements (characterization etc.) that makes the reader buy into the genre details.

Well, Flora’s adventures will continue next year in Flora Redux, which will be published in Spring 2008. For overseas fans, the UK edition of Flora Segunda will be out in July. After Flora Redux, there will be one more Flora book. I’m also about half-way done with an adult fantasy set in Califa called Metal More Attractive. And I have plans to collaborate with another author on a YA book about a young girl mad scientist who decides to make a guardian so she isn’t sent to an orphanage. Consider it the young Jane Eyre meets Frankenstein…! So there’s plenty coming!

Learn more about Ysabeau via interviews from BookPage and Harcourt. See also a recommendation of Flora Segunda from Bookshelves of Doom. Note: the novel received a rare full-page review in the New York Times.