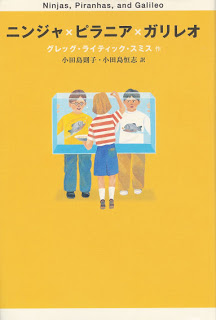 Congratulations to my husband and sometimes co-author Greg Leitich Smith on the publication of the Japanese edition of Ninjas, Piranhas, and Galileo (Poplar Sha, 2007)!

The book was originally published in hardcover by Little Brown in 2003, then in audio by Recorded Books in 2004 and in paperback by Little Brown in 2005. A Korean edition also is forthcoming. Read author interviews about the novel from Cynsations, Downhome Books, Debbi Michiko Florence and YABC.

From the flap copy: “Elias, Shohei, and Honoria have always been a trio united against That Which Is The Peshtigo School. But suddenly it seems that understanding and sticking up for a best friend isn’t as easy as it used to be.

Elias, reluctant science fair participant, finds himself defying the authority of Mr. Ethan Eden, teacher king of chem lab. Shohei, all-around slacker, is approaching a showdown with his adoptive parents, who have decided that he needs to start ‘hearing’ his ancestors. And Honoria, legal counsel extraordinaire, discovers that telling a best friend you like him, without actually telling him, is a lot harder than battling Goliath Reed or getting a piranha to become vegetarian.

What three best friends find out about the Land of the Rising Sun, Pygocentrus nattereri, and Galileo’s choice, among other things, makes for a hilarious and intelligent read filled with wit, wisdom, and a little bit of science.”

“A fresh, unusual story of friendship and honesty, riddled with wit, intelligence, and more than a few chuckles.” –School Library Journal”[A] fast-paced send up of school life. Smith achieves just the right balance of intelligent wit and drama in his first novel.” –Booklist “Smith’s sparkling debut offers three seventh grade narrators, each of them precocious, intelligent, and wickedly funny… Readers will identify with these smart characters and enjoy the vicarious attendance at their idiosyncratic school.” –Publishers WeeklyMore News & Links

Children’s Literature Network: This site receives more than one million hits per month. It draws a national community of people from diverse backgrounds who are passionate about children’s literature and want to learn more about the industry. The sites popular Author and Illustrator section offers helpful information about children’s book authors and illustrators in any given geographical area. To be listed on one of these pages through a CLN Professional Membership, visit their site.

I’m honored that my recent YA novel, Tantalize (Candlewick, 2007) is one of two featured “Books of the Week” at Genrefluent: The World of Genre Fiction. The recommendation reads “Tantalize is a seductive read, perfect to savor with it myriad twists and turns…” and continues “This delectable novel is already creating quite a buzz among teen readers with good reason.” Read the whole review.

The mastermind behind Genrefluent is Diana Tixier Herald, author of Genreflecting: A Guide to Popular Reading Interests (Sixth Edition)(Libraries Unlimited, 2005).

Thanks to Tracie Vaughn Zimmer for her take on Tantalize: “…this is a no-holds-bar gothic, titilating scintillating tale with a hot werewolf boyfriend and murder mystery with bloody fangs. Fans of Libba Bray’s Beauty series take note: this is where to wait. HIGHLY RECOMMENDED!” Read the whole recommendation. Don’t miss Tracie’s Reaching for the Sun (Bloomsbury, 2007).