APL (Austin Public Library) Teens is sponsoring a giveaway of ARCs of my upcoming gothic fantasy novel, Tantalize (Candlewick, Feb. 13, 2007). The word is: “A few of us have read it and we can say with confidence that if vampire novels are your thing, THIS is one book you must read.”

Thanks to Jo Whittemore for mentioning me among such distinguished company at “Authors Who Bring Good Luck.” Here’s crossing fingers for your agent submission. Read a Cynsations interview with Jo.

The 10th Carnival of Children’s Literature at Big A little a.

In the Coop with Kevin O’Malley: a silly interview from Three Silly Chicks.

The Longstockings’ Flappie Award goes to… See for yourself!

“Rising Star – Sean Qualls” by Deborah Stevenson, editor, from The Bulletin of the Center of Children’s Books. Learn more about Sean Qualls. Note that he offers prints online for sale.

Highlights of the ALA Notable Children’s Books include…

Highlights of the top ten BBYAs include: The Astonishing Life of Octavian Nothing, Traitor to the Nation, Volume 1: The Pox Party by M.T. Anderson (Candlewick); The King of Attolia by Megan Whalen Turner (HarperCollins)(excerpt); and The Rules of Survival by Nancy Werlin (Dial). Read a recommendation of The King of Attolia and an interview with Nancy on The Rules of Survival.

When he’s not writing his own books, David Levithan is a Scholastic editor in New York City. He lives in Hoboken, New Jersey.

The kid who listened to Carly Simon and was about to discover the Smiths.

No, I got lucky. I accidentally wrote my first novel.

I’d like to focus on your new releases, but first let’s highlight your backlist. Your books include: Boy Meets Boy (Knopf, 2003); The Realm of Possibility (Knopf, 2004); Are We There Yet? (Knopf, 2005); and Marley’s Ghost (Dial, 2005). Could you briefly tell us what each is about and what drew you to those stories?

Boy Meets Boy is a dippy happy gay romantic comedy, meant to counterbalance all the grim, sad, gloomy gay teen books of the past.

Realm of Possibility is the story of twenty kids who go to the same high school, and how their lives intersect.

Are We There Yet? is about two brothers who can’t stand each other whose parents trick them into taking a trip to Italy together.

And Marly’s Ghost is a remix of Dickens’s A Christmas Carol.

One of your new titles, Nick and Norah’s Infinite Playlist (Knopf, 2006) is co-authored by Rachel Cohn. How did this working relationship evolve? What are the particular challenges and benefits to working with a co-author?

It was Rachel’s idea to write a back-and-forth novel…and I’m glad she had it. We started with two names and a few facts, and then wrote the novel by exchanging chapters, without talking about it along the way.

We really wrote it for each other, and it’s been really amazing that other people have liked it, too. If our storytelling hadn’t clicked, the book would’ve never happened; so once it did, it was pretty smooth sailing.

Congratulations, too, on Wide Awake (Knopf, 2006)! What was your initial inspiration for writing this book?

The election results of 2004 inspired me to write it–I wanted to write a novelist’s version of a protest song. I wanted to talk about what’s going on in America today, and how it could get better.

It’s very strange to set a novel in a place you’ve never visited, but luckily I had friends to tell me about Kansas. More importantly, I wanted to make sure that it was clear that “religious” is not synonymous with “conservative” or “anti-gay” or “anti-Jewish”–instead, most religious people believe in kindness and love and tolerance.

You’ve also edited a number of anthologies, most recently The Full Spectrum: A New Generation of Writing About Gay, Lesbian, Bisexual, Transgender, Questioning, and Other Identities, co-edited by Billy Merrell (Knopf, 2006). How did you find your authors? What questions did you weigh in balancing the collection?

We set up a website (www.queerthology.com) and spread the word via email and the Internet. We were amazed by the responses–we didn’t have the room to include all the essays we liked. We wanted it to be as representative a collection as possible, and were happy that we got such a wide range of responses.

In particular, the number of transgender essays really impressed us, and I think they give the collection its heart, because it shows how our culture is still evolving in terms of gender and sexuality.

Other than your own, what would you say are the three must-read YA novels of the year and why?

It’s hard to narrow it down! I’ll just say that Markus Zusak‘s The Book Thief (Knopf, 2006) was the book that astonished and inspired me the most this year.

What do you love about your writing life and why?

I love seeing how the stories unfold. It’s as simple as that.

What advice do you have for beginning YA novelists?

Write what you want to.

My next book with Rachel, Naomi & Ely’s No Kiss List (Knopf), comes out in August. And I have two anthologies out this spring — This is PUSH (www.thisispush.com) and 21 Proms, which I co-edited with Daniel Ehrenhaft. It’s a whole lot of fun.

the Candlewick spring 2007 catalog include: Beige by Cecil Castellucci and The Restless Dead, edited by Deborah Noyes. Read interviews with Cecil and Deborah.

The American Library Association has named its 2007 award winners. See a complete list of the titles on the ALA site. I’ve highlighted titles and/or authors previously featured on this blog.

Rules also is the middle grade winner of the Scheider Family Book Award, honoring titles that “embody an artistic expression of the disability experience.” Read an interview with Cynthia.

The Coretta Scott King Awards recognize “African American authors and illustrators of outstanding books for children and young adults that demonstrate sensitivity to ‘the true worth and value of all beings.'” Copper Sun by Sharon M. Draper (Atheneum) was a CSK award winner. The CSK illustration award went to Moses: When Harriet Tubman Led Her People to Freedom by Carole Boston Weatherford, illustrated by Kadir Nelson (Hyperion). Read an interview with Kadir. This same title also was recognized with a Caldecott honor. The Randolph Caldecott Medal is “for the most distinguished American picture book for children.”

The Printz Award “for excellence in literature written for young adults” honor books included An Abundance of Katherines by John Green (Dutton, 2006) and The Astonishing Life of Octavian Nothing, Traitor to the Nation, Volume One: The Pox Party by M.T. Anderson (Candlewick, 2006). Read interviews with John about Katherines and with Tobin about a previous title, Whales on Stilts (Harcourt, 2005).

The Theodor Seuss Geisel Award “for the outstanding book for beginning readers” went to Zelda and Ivy: The Runaways by Laura McGee Kvasnosky (Candlewick, 2006). Read an interview with Laura.

Winners and honorees also listed among my own favorite books of the year included: Penny from Heaven; Rules; Copper Sun; and Moses.

“Moonshower’s Heart Leads Her Back to Children’s Books:” an exclusive Authorlink interview with Candie Moonshower, author of The Legend of Zoey (Delacorte)(excerpt) by Susan Van Hecke.

“What lies behind the magical doors of Crackpot Hall?” An interview with Ysabeau Wilce by Kelly Link from BookPage. Ysabeau Wilce is the author of Flora Segunda: Being the Magickal Mishaps of a Girl of Spirit, Her Glass-Gazing Sidekick, Two Ominous Butlers (One Blue), a House with Eleven Thousand Rooms, and a Red Dog (Harcourt)(excerpt).

The Mystery Writers of America has announced the 2007 Edgar Allan Poe Award nominees, “honoring the best in mystery fiction, non-fiction, television and film published or produced in 2006.” The Edgar Awards will be presented at a banquet on April 26 in New York City.

Nominees in the “best juvenile” category are: Gilda Joyce: The Ladies of the Lake by Jennifer Allison (Penguin-Sleuth/Dutton); The Stolen Sapphire: A Samantha Mystery by Sarah Masters Buckey (American Girl); Room One: A Mystery or Two by Andrew Clements (Simon & Schuster); The Bloodwater Mysteries: Snatched by Pete Hautman & Mary Logue (Penguin-Sleuth/Putnam); The Case of the Missing Marquess: An Enola Holmes Mystery by Nancy Springer (Penguin-Philomel/Sleuth). 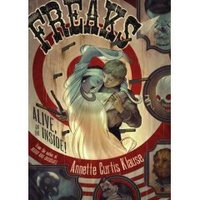 Check out the new paperback cover art for Freaks: Alive on the Inside by Annette Curtis Klause (Simon & Schuster, 2006).

Annette says: “I have a large cast of unusual characters in this book , and while the people in my story are imaginary, their physical differences are often inspired by those of people who really lived, and many characters are composites of people I came across in photographs and accounts.”

Read a Cynsations interview with Annette. See the “Blood and Chocolate” (inspired by a 1999 novel by Annette) movie trailer.

Speaking of gothic fantasy, I’m enormously flattered (and rather stunned) by Liz Gallagher’s take on my upcoming Tantalize (Candlewick, Feb. 13, 2007): “Totally Buffy-esque. Of course I thoroughly enjoyed it. Actually, I enjoyed it more than I ever enjoyed ‘Buffy.’ Favorite line: ‘You ate the police?'” Thanks, Liz! Look for Tantalize on pages 26-27 of the Candlewick Spring-Summer 2007 catalog!

Seven Impossible Interviews Before Breakfast #1: Liz from A Chair, a Fireplace & a Tea Cozy. Wonderful interview, and wowza! I’m blushing neon at the lovely mention of my blogs. Thanks so much! Jeepers, what an honor!