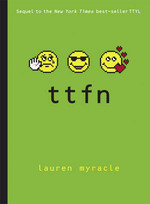 Lauren Myracle is the author of six novels for tweens and teens with many more in the works. Her breakout success came with the publication of ttyl (Abrams, 2004), the first-ever novel written entirely in instant messages. Both ttyl and its sequel, ttfn (Amulet, 2006), are New York Times Best-Sellers, and readers eagerly await the third instant messaging book, l8r, g8r, which is due out in March 07.

Lauren holds an MFA in Writing for Children and Young Adults from Vermont College, and her work has been described by teens as “awesome,” “the best ever,” and “sooo funny.” She was perhaps most pleased, however, by the reader who said of her work, “I can’t believe it was written by a (cough, cough) grown-up.”

Oh, baby. I’ve loved books since the day I first learned to read, which for the record was October 15th of my first grade year. (Just kidding! It might have been October 16th. It was definitely when I was in the first grade, though.)

Anyway, I started writing my own stuff around that same time, and I have journals on top of journals of my stories and blatherings and lists of unachieved New Year’s resolutions.

I started writing for real (and by “for real,” I mean with the intent of actually reaching the end of a honest-to-God book) when I was twenty-three. +sighs and looks back nostalgically at young self+ Ah, what a long road it’s been.

What made you decide to write for teens?

I didn’t decide. I just did. I love teenagers; I love books for teenagers; I love my whole teenage psyche, which is quite alive and well, thanks very much. For me, this was one of those “it’s just part of my constitution” things. And to that I say…yay!

Er…awkward. Skinny. Bookish, but only when it came to stuff I picked out to read on my own. In terms of school, I was an underachiever, although I did enough to float by.

And finally, I have come to realize in my dotage that as a teenager, I was cuter than I realized at the time, which I say because if you’re a teenager and by chance you’re reading this, you are also cuter than you realize. And smarter and funnier and cooler all around. Give yourself some credit, girl! Or boy!

Okey-doke! +takes deep breath and recites in order+ Kissing Kate, Eleven, ttyl, Rhymes with Witches, The Fashion Disaster that Changed My Life, ttfn. There! Did it! And they’re all lovely, and you should read them all. If you want dark and troubled, try Rhymes with Witches. If you want sweet and clean, try Eleven. If you’re an IM freak (don’t be ashamed!), read ttyl and ttfn. And then just go on and read Kissing Kate and Fashion Disaster for the heck of it.

Congratulations on the success of ttyl and ttfn! What was your initial inspiration for writing these books?

Merci, merci! You are a sweetie. The credit for inspiration all goes to my fabulous and adorable and brilliant-beyond-words editor, the great Susan Van Metre.

One day, she and I were having a talk about how different things are for girls now than when we were teenagers, and we circled around to the whole IM thing. You know, how when we were in school, we’d come home and phone our buds and go over the day (who wore what, who said what, etc.), but now, girls come home and IM their buds to do their post-op.

And Susan said, “Someone should write a book all told in IMs.”

What were the challenges (literary, research, psychological, logistical) in bringing these stories to life?

The research part wasn’t hard; it was the logistics of telling a story without using blatant exposition or straightforward narrative or even just “moving the story along” techniques like, “And then, the next day, a big monster came down and swallowed the city whole.”

It turned out to be rather like writing a play, I guess, but different even than that, because my characters weren’t on the stage interacting together. They were all sitting at their computers, typing. And do you know how potentially boring that is?

I mean, okay, I should shut up now, but sometimes I feel like people (critics) pooh-pooh my books because they’re written in (gasp!) IMs, and they look easy-peasy and quick. But to them I say: you try it, and then we’ll talk! 🙂

Did you intend for there to be more than one of these novels? How did that evolve?

Well, I hoped there’d be more than one, but when I suggested to Susan that we do a sequel, she politely and sweetly said, “Sorry, Charlie.” But nicer. And she used my actual name. And then when ttyl did well, she came back and said, “Erm, any chance you’d like to do a sequel?” And I beamed and got to work.

I hang out with my three little kittens, who are really human children. I just call them “kittens.” And I do laundry. And take food out of its packaging, plonk it on a plate, and pretend I cooked it. Basically, I do all the mundane activities of life, all the while fantasizing about a week long vacay where I can lie in the sun and just read!

In Their Own Words: Interviews with Children’s and YA Authors and Illustrators from my web site. See also YA Literature Reading Links and Young Adult Books Bibliography.