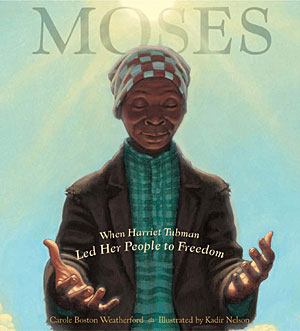 Kadir Nelson began drawing at the age of three. At eleven, Nelson experimented with a variety of media, and at sixteen, he began painting with oils under the encouragement and tutelage of both his uncle and high school art teacher. He began entering his paintings in art competitions and ultimately won an art scholarship to study at the prestigious Pratt Institute in Brooklyn, New York. Upon graduating with honors, Nelson began his professional career as an artist, publishing his work and receiving commissions from publishers and production studios such as Dreamworks, Sports Illustrated, Coca-Cola, The New York Times and Major League Baseball, among others.

Nelson has also exhibited his artwork in galleries and museums throughout the country and abroad, including the Simon Weisenthal Center, Museum of Tolerance and the Academy of Motion Pictures and Sciences in Los Angeles, The Museum of African American History in Detroit, The Smithsonian Anacostia Museum in Washington D.C., The Society of Illustrators and the Studio Museum in Harlem in New York, The Bristol Museum in England, The Citizen’s Gallery of Yokohama, Japan; and the Center for Culture of Tijuana, Mexico.

Among Nelson’s most recent works are the epic paintings, “The Life of Marvin Gaye,” “Marvin Gaye,” “Swizz Beatz: Ghetto Stories” and “Angel,” none of which are smaller than six feet high or wide.

Nelson has illustrated more than a dozen children’s books, including the most recent Moses: When Harriet Tubman Led Her People to Freedom, written by Carole Boston Weatherford (Hyperion, 2006), which Publishers Weekly described as having a “gorgeous,” “poetic” and “larger-than-life presence.” His other picture books include: Debbie Allen’s Dancing in the Wings (Dial, 2000); the Coretta Scott King Award Book Ellington Was Not A Street by Ntozake Shange (Simon & Schuster, 2004); New York Times Best-Sellers Salt in His Shoes by Deloris and Roslyn Jordan (Simon & Schuster, 2000) and Please, Baby, Please by Spike Lee and Tonya Lewis-Lee, and Will Smith’s Just the Two of Us (Scholastic, 2001) for which Nelson won an NAACP Image Award. Currently, Nelson is completing a tribute book about the Negro Baseball Leagues, which he is both writing and illustrating.

How did the artist’s path first call to you?

I was born to be an artist. I have created artwork ever since I can remember. I think it’s in my genes.

What inspired your interest in children’s book illustration specifically?

I was initially asked by an editor and then a friend to illustrate children’s books. My work has always had some sort of narrative and creating artwork for children’s books felt quite natural to me.

After having graduated from college, I made a trip to New York to meet with publishers and potential clients. I didn’t land any deals for books, though I was commissioned to paint a book cover. However, during my trip, I made a number of contacts, so when I was ready with a children’s book idea, I had a number of contacts to share it with. The time to share the idea came several months later when Debbie Allen asked me to illustrate her book, after which we made a trip to New York to find a publisher.

Congratulations on the publication of Moses: When Harriet Tubman Led Her People to Freedom by Carole Boston Weatherford (Hyperion, 2006)! What was it about Carole’s manuscript that called to you?

I simply felt it was a very strong story and was well written. Also, Harriet Tubman has always reminded me of my grandmother, so I really had an affinity for the subject.

It usually takes a few days to create thumbnail sketches, and then a few more days to make larger clearer sketches. The finishes took approximately four months to complete. After the artwork was accepted, approximately one year later the book was published.

What were the challenges (artistic, research, psychological, and logistical) in bringing it to life?

The only real challenges were finding clear pictures of Harriet. There are really only a few. Creating original and varied night time scenes was also challenging.

What do you love about your artist’s life?

I love the fact that I don’t have to fight traffic and go in to work everyday. It’s really a blessing.

What are its tougher aspects?

Running a couple of businesses at once is tough. I’m starting to delegate more these days. It’s making life a bit easier.

What advice do you have for beginning illustrators?

I think beginning illustrators need to find their voices and toughen their skin. There is a lot of rejection in the beginning, but it gets better.

I’d have to say the same thing. It’s also important to surround yourself with good, competent, supportive people. And have some fun with it!

What do you do when you’re not illustrating?

I spend time with my family. I’m also a Scrabble nut.

Spring ’07 will bring two new books, Henry’s Freedom Box by Ellen Levine, which is about a Virginia slave during the mid 1800’s who mailed himself to the free state in of Pennsylvania in a wooden crate to escape slavery. The second book is entitled, Michael’s Golden Rules by Deloris and Roslyn Jordan, which is about Michael Jordan‘s childhood pursuits of playing baseball.

Moses: When Harriet Tubman Led Her People to Freedom by Carole Boston Weatherford, illustrated by Kadir Nelson (Hyperion, 2006) is one of the most inspiring, beautifully written and illustrated picture books of the year.

Q&A with Carole Boston Weatherford on Moses: When Harriet Tubman Led Her People to Freedom from the author’s website.